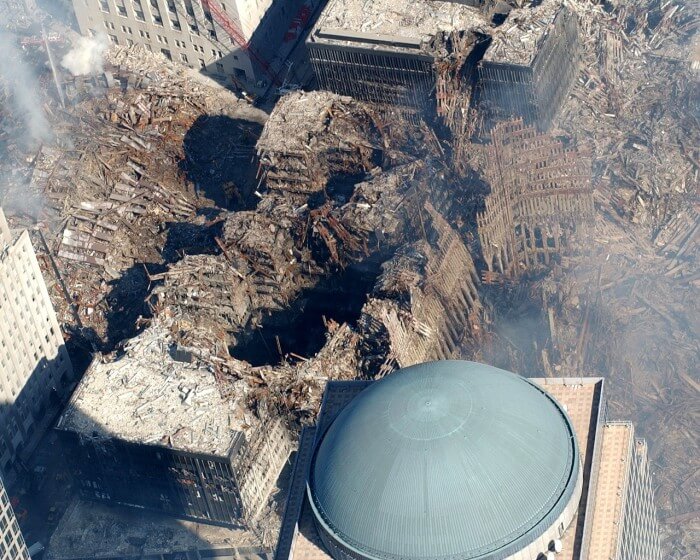 It has been 18 years since America and everyone privileged to live in this great land, was forever changed. I recall hearing adults talk about where they were and what they were doing when JFK was shot, and during the attack on Pearl Harbor

Having not been born during either shocking national incident, I never really fully understood how watching the news unfold would leave such a lasting mark on your soul.

I was an educator in a rural Ohio school district during the 9/11 attacks. School had only been in session for a little while when the first plane hit the World Trade Center tower. Several of us were in the elementary school break room – work room while the students were at gym class grading papers when Miss G. nearly ran into the room and flipped the television channel.

She excitedly announced that a plane had hit one of the Twin Towers in New York City. Our overall initial reaction was, “Oh, what a shame,” thinking that a small plane or NYC tourist flight had met a tragic end.

As we watched the smoke flowing out of the building, it seemed hard to believe that a small aircraft could have caused such damage. We listened eagerly to the speculations by journalists on television about what likely happened – they knew virtually nothing at the time beyond the simple fact that a plane had hit the World Trade Center.

Less than a few moments after turning the workroom television channel, I remember saying, “Is that another….” while pointing at what looked like a second plane as it plowed into the building.

There, in that moment, everyone in America knew with absolute certainty that we were under attack. This was not a horrific accident where a few precious lives were lost, but a coordinated terrorist attack of epic proportions.

Unfortunately, we did not know at the time how right we were about the magnitude of the attack. That did not come until the Pentagon was hit and a handful of brave Americans thwarted the plans of the radical Islamic terrorists, and took their plane down in a vacant field in Shanksville, Pennsylvania.

Attempting to retain your composure while standing in front of a classroom of children oblivious about what was going on – awaiting what more news from the television set was extremely difficult. Teachers, not students, were now passing notes.

“Another plane went down…”

By the time the third and fourth planes went down, parents were understandably flocking to the school to retrieve their children.

I was supposed to run in to town and pick up Burger King gift certificates as rewards for an ongoing monthly program at our elementary school. When I asked the principal if she still wanted me to go, she said it was up to me. I said that keeping as much normalcy in the school day for the still unaware students, was a good idea. She agreed.

While I meant what I said, I really just wanted to get out of that building and breath – not knowing how much longer I was going to be able to keep my emotions in check. Watching people jump out of 90 story windows to escape the pain from the heat generated by jet fuel flames and the smoke will forever be seared in my mind.

When I got to Burger King I just went through the drive thru window to get the gift certificates. Mingling with other folks just felt like too much to deal with at that moment. Bryan, the manager I had frequently worked with on school projects, came to the drive thru window. He was visibly shaken, yet a sense of relief showed on his face, as well.

Bryan said he had been frantically attempting to get a hold of his sister one her work satellite phone for an hour. She had been scheduled on one of the flights that went down.

He said there was some bumping on the flight and her boss chose to take the available seat so he would not be late for a meeting and had her stay behind to catch a later flight.

While Bryan, being a nice guy, surely felt bad that his sister’s boss was surely among the victims of the radical Islamic terror attack, he was clearly overjoyed that his kid sister was still alive.

The school was ultimately placed on early dismissal – not many students were left in any of the buildings by lunchtime, anyway. My daughter was in first grade at the time.

Once we got home I had to figure out a way to explain to her what had happened and why we wouldn’t be celebrating her great grandmother’s 86th birthday that evening as planned.

Looking into her sweet little face it was heart wrenching to grasp that neither she nor any other child in the United States would be growing up in the same America that I had enjoyed.

Like everyone else, my eyes were glued to the news for days (weeks, really) after the 9/11 attack. Even though we watched the terror attack unfold in real time, it still was nearly impossible to grasp that all of this was real.

On September 10, 2010, about 3,051 children kissed their parents good night for the final time. Spouses of first responders hugged their loved one good-bye hoping they would return safely home soon, but far too many local heroes gave their lives helping others.

Many of those selfless individuals are still suffering and dying today due to the exposure to Ground Zero during the rescue, recovery, and cleanup efforts.

As I watched the news this morning, I thought about all of the children born since 9/11. They would grow up hearing the adults in their lives talking about where they were on this day just like I heard “where I was” stories about the JFK assassination and the Pearl Harbor attack.

They will grow to understand the magnitude of the event but have no real personal connection to the event because they had not lived through it.

Being able to avoid dealing with a tragic event during childhood is, of course, a good thing. But could such a disconnection lead the next generation into complacency when it comes to dealing with terrorism threats? I hope not, but that is a very real possibility.

Where were you on 9/11 and how did it impact your prepping efforts?