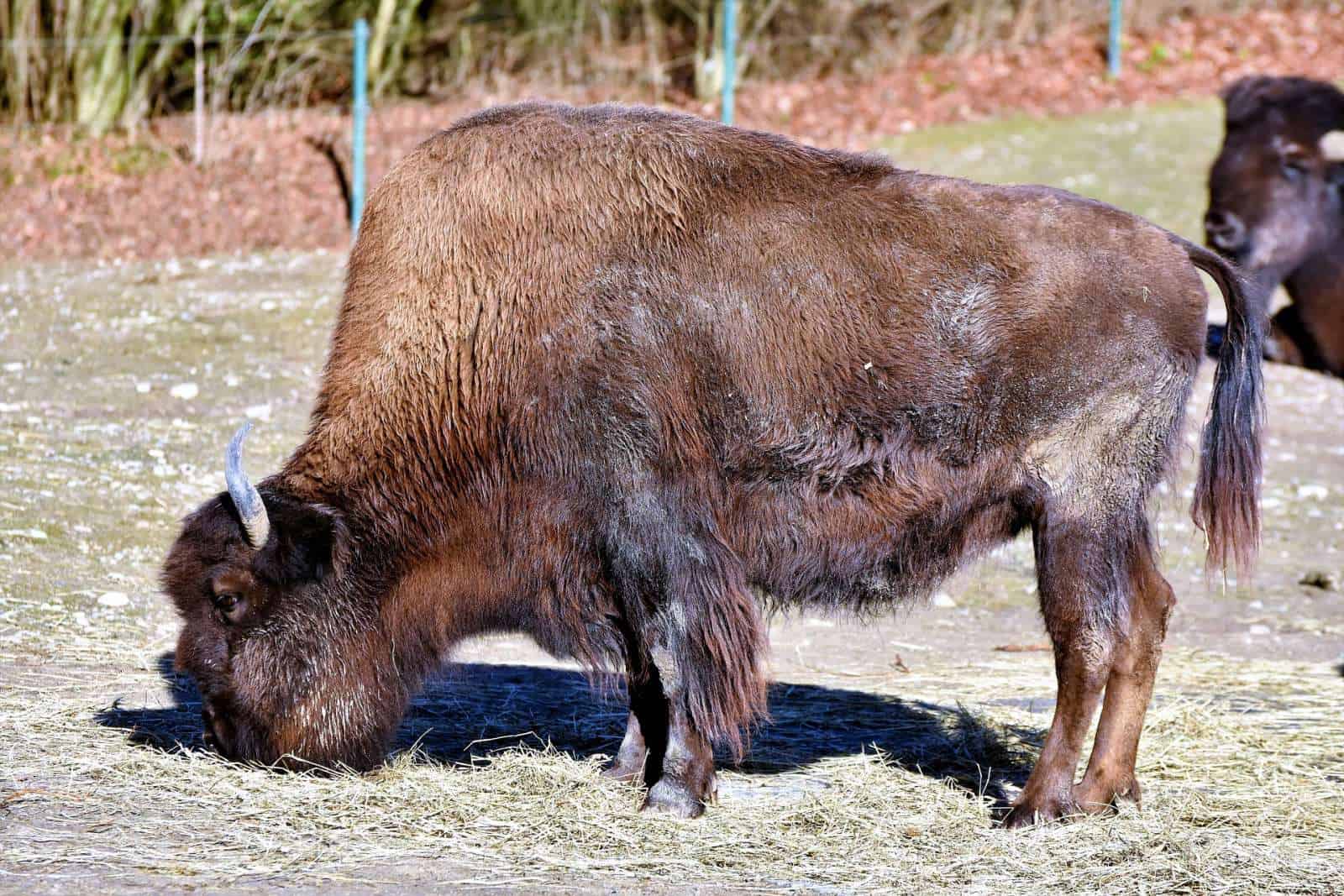 Bison are members of the Bovidae family and are native to North America and Europe. There are two main species of bison: American and European – and there are a few subspecies of each.

At one time, there were millions of bison across Alaska, Mexico, and the Appalachian Mountains but by the time the late 1800s rolled around the European settlers had hunted them to the brink of extinction.

They have made a great comeback, however, and are greatly admired by all who see them. As with any animal of their size, there is the obvious question: are they dangerous?

Yes, bison are very dangerous to people. Their size and strength pose a formidable threat; able to cause serious damage through the amount of force and impact that a charge can do.

Their horns are sharp and can cause serious puncture wounds. They’re also incredibly athletic and agile able to run and turn on a dime without losing much if any momentum.

The American Bison is the largest mammal in the USA with males standing 6ft. tall and reaching between 1 and 2000 lbs. in weight and females reaching up to 4 – 5 ft. in height and weighing around 1000 lbs.

They have a large, stocky build with a hump of muscle situated near the shoulders and a big, broad head which they can use to push through snowdrifts in the winter.

Bison also have a pair of short, sharp horns. They have a thick, double-layered coat to aid in dealing with the harsh winters and a distinctive, shaggy beard.

Bison travel in two distinct herds of males and females which only come together in mating to season to, well, mate, and make lots of little bison.

One can’t look at these animals and not feel in awe of them – even if they do resemble big, lazy cows in a way. Speaking of which, don’t be deceived by their seemingly relaxed, casual appearance; bison can be very aggressive.

Bison are incredibly unpredictable, despite their apparent laziness and relaxed demeanor, they can and do inflict serious damage.

What makes bison attacks so terrifying is that they can come literally out of nowhere. One minute they’re peacefully eating a grass salad and the next they’re charging at you.

With that said, there are some – for lack of a better descriptor – warning signals which can indicate a possible charge/attack.

Other than false charges, these signals include:

An interesting warning sign that you’ll see is the tail of the animal. When their tails are down against their bodies just flicking idly back and forth, they’re calm, but when they’re agitated or upset, that tail of theirs stands up straight.

If they do decide to attack, bison have a couple of different weapons at their disposal. The first and most obvious ones are their horns.

The next weapon is, of course, the sheer size and strength of these animals. That big head of theirs is backed up by up to 2000 lbs. of weight and can be used to plow through snowdrifts in winter – like I said earlier – it can also be used as a battering ram.

Getting headbutted casually is bad enough, having a 2000lbs. animal headbutt you with some good speed behind it? Yeah, I’ll pass.

If the impact of the bison’s noggin connecting with your chest doesn’t kill you, those sharp horns of theirs will likely finish the job pretty quickly.

Additionally, as if being skewered and/or squashed wasn’t bad enough; there’s also a possibility of being kicked and stomped on.

Brute strength aside, bison are incredibly athletic and able to run at speeds of 35 miles per hour for up to 5 miles – considering that the average human can only 6 miles per hour and only for a short distance, outrunning an enraged bison isn’t looking like a solid plan.

They’re also strong swimmers and amazing jumpers so lakes/rivers and walls/barricades don’t really mean much. If they really, really want to get you; they’ll get you.

Additionally, despite their slow-looking appearance, bison are incredibly agile and can turn on a dime at minimal cost to the momentum they generate.

How Frequent are Bison Attacks?

So, we know that these attacks are nasty but how often do they occur? The Yellowstone National Park, which is one of, if not the only place where you can find purebred bison, gets between 2 and 4 million visitors every year.

One study from 2018 analyzed the time period of bison-related injuries from 2000 to 2015. They found that in that time frame 25 people were injured in a bison encounter.

These injuries/incidents were found to have occurred near the hiking trails and geyser basins between April and October with the largest numbers being in June and July – during the rut (mating season).

Bison-related injuries have a few sources – primarily human behavior. Common factors were that people approached a bison and got too close for its comfort.

Why would they approach this animal that’s built like a tank? One word: selfie. Yes, people are commonly injured when they approach the bison to pose/take a selfie with it. Other triggers are:

Obviously if you sneak up on one of these guys, they’re not going to take kindly to it. Approaching as a group may make the animal feel threatened – strength in numbers and all – which will most certainly provoke a reaction.

Failing to retreat, this doesn’t mean ‘run away as fast as you can’ – we’ve already discussed why you wouldn’t be able to outrun an angry/agitated bison. When we talk about retreating from an approaching animal, what we mean is simple: get out of the way!

So, the final verdict is yes, they are dangerous. They’re big, powerful, and unpredictable animals who can do serious damage to a person.

You can’t out-muscle them and you can’t outrun them. It’s best, therefore, to just keep a safe distance; don’t approach them, don’t taunt them, just leave them alone.

They’re beautiful animals, I know, but please use your common sense; they don’t like it when we approach them and get into their personal space, and we don’t particularly like being crushed or skewered.

It’s best to just let bygones be bygones and watch from a safe distance.

Well, I believe I’ve covered everything so, in closing, I hope you enjoyed this article and found it informative. Thanks for reading and I’ll see you for the next one!

In addition to being a huge knife-nut, and good at shooting a bow, Greg has been farming ever since he was a little kid. He’s also a camping and hiking enthusiast.