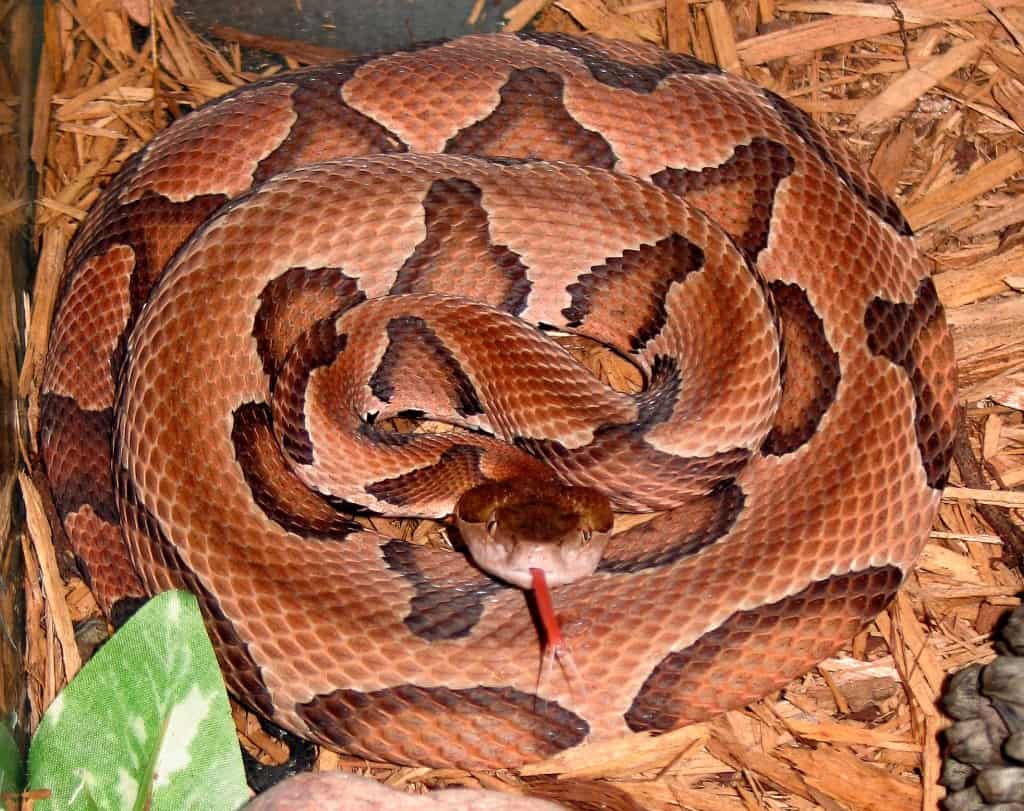 America, and indeed the world, is full of snakes and among all the hundreds of varieties some of them are venomous. Considering snakes native to North America, the copperhead is among the most common and also the one responsible for a huge majority of envenomations in humans.

A wide-ranging habitat, stealthy behavior and a likeliness to bite when encountered at close range means that careful consideration and assessment of this dangerous reptile is required. Just how dangerous are copperheads?

Copperheads are definitely poisonous and dangerous. The venom of the copperhead rapidly breaks down blood cells causing excruciating pain and subsequent tissue death. Serious complications can result in bone death as well. Any copperhead bite must be treated as a life-threatening emergency.

The North American copperhead that is so commonly found throughout the eastern half of the country and also in the American southwest is among the least deadly of the venomous snakes on the continent but that does not mean that the bite is not a major emergency.

Though it may be counted as among the least dangerous of the venomous snakes, that does not make it non-life threatening! There is much more to learn about this potentially deadly snake, and we will talk about it in the remainder of this article.

The snake we know of with the poetic name copperhead or Eastern copperhead is more properly described by its scientific name Agkistrodon contortrix.

These snakes trend towards the small side among their North American relatives, with an overall length of 2 ½ to 3 feet being common, and exceptionally large specimens growing up to 4 feet or longer, though this is quite rare.

These snakes have a distinctively wide, spade or arrow shape to their head and their bodies are stout and muscular. The blunted nose and sloping upper surface of the head gives them a decidedly menacing and aggressive look when viewed from the side.

However, they’re most distinctive characteristic is that which lends their common name. Copperheads are invariably some shade of earthy yellow, brown or copper with generally regular hourglass shaped sections of contrasting color running their entirely.

Encountered in their typical habitat, be it a forest floor, desert, or anywhere in between these regions, their coloration serves as shockingly effective camouflage. It is this camouflage which helps the snake ambush prey and also leads to unfortunate run-ins with humans thanks to their other behavioral characteristics.

More on that in a minute, but another behavioral characteristic you must be aware of is that of the snake’s superlative adaptability.

These snakes are entirely happy to move into settled regions near human habitation, and that means that any piles of firewood, brush, yard waste and other crowded, cluttered environments could well make for an excellent copperhead home.

Speaking of homes, wherever you go throughout the American south, eastern seaboard, northeast and even parts of the American southwest you can find these snakes, and that means you must be prepared for dealing with them, particularly a bite from one.

How do Copperheads Interact with People?

Copperheads would prefer to stay away from people, and the snakes are not innately aggressive unless they are cornered, handled, stepped on or otherwise provoked.

But here lays the rub, or rather the snake: Aside from their excellent natural camouflage when motionless, copperheads have a propensity to remain completely motionless when they are afraid or feel threatened, relying on their camouflage to avoid confrontation.

If you think this through, this is what leads to so many copperhead bites in North America.

Most folks don’t have a prayer of spotting them when they are lying on the ground, particularly the forest floor among leaves and this leads to the snake being stepped on or someone laying a hand too close to them.

So even though the snake is simply trying to avoid trouble by lying perfectly motionless without moving a muscle among those dried leaves that perfectly match its natural scale coloration it will still bite you when it feels it has no other choice.

It is difficult to impress on those who are uninitiated with these snakes just how difficult they are to spot in ideal conditions of concealment.

However, just because you are out of the woods doesn’t mean you have nothing to fear from copperheads or their venomous bite.

As natural habitat is constantly eating up by human development you’ll have to keep a sharp eye out for copperheads in and around various human settlements and habitation.

Gardens, tool sheds, cleared brush, porches and other structures make excellent hunting ground and shelter for copperheads. These snakes also climb and can be found, oftentimes the painful way, resting on elevated surfaces.

In short, the copperhead’s excellent camouflage and conjunction with its tendency to remain completely motionless are obvious causes for it leading the charts in the venomous snake bites on humans in North America.

Perhaps the only saving grace when considering a bite from this venomous snake is the fact that its venom is not especially lethal, especially compared to other pit vipers.

The venom of the copperhead is hemotoxic, annihilating blood cells and typically leading to the death of muscle and bone tissues.

Though rarely fatal, comparatively, significant tissue loss and complications are probable, and amputation is far from out of the question if antivenin is not administered.

So let’s say you are walking haphazardly through the forest minding your own business when you notice a lancing pain in your calf. Looking down, you see a copperhead recoiling and scurrying away as you leap back.

The next thing you will likely notice is a growing, throbbing pain that trends towards unbearable and you will likely also notice significant swelling and a shimmering, electrical, skin-crawling sensation immediately at and radiating out from the site of the bite.

However, if you are very fortunate you will not feel any of these effects and will have only the pain of a puncture wound (albeit one that is almost certainly infected with reptilian filth).

Venom is expensive in biological terms, and a snake must spend a lot of time and a lot of caloric resources regenerating venom for use in hunting or self-defense.

Accordingly, the copperhead does not inject venom all willy-nilly like certain rattlesnakes or other venomous critters and instead may husband it for appropriate usage.

It must also be noted that adolescent snakes are far more likely to envenomate and envenomate heavily upon a bite.

Though you certainly cannot count on a save in this way, consider yourself blessed if you don’t get dosed should you be bitten.

Regardless of what you might think, if you are bitten by a copperhead or any snake that leaves behind the distinctive puncture wounds of fangs, seek medical attention post haste.

Envenomation must always be considered life threatening and will entail a risk of amputation particularly if bitten on a hand or foot, and even a dry bite may lead to an infection so severe that your life could be in jeopardy.

Although it might be considered the least impressive of the venomous snakes inhabiting North America, the venom of a copperhead is still quite dangerous, and likely to lead to severe maiming, amputation or even death.

Though they might be discounted compared to their more infamous rattlesnake and cottonmouth cousins, the copperhead nonetheless leads the charts concerning venomous snake bites on humans.

These snakes rely on superb camouflage to hunt and to remain undetected by predators, and that means people are disproportionately likely to quite literally stumble upon them in their travels and subsequently be bitten.

Extreme care must be used when traveling through any environment where copperheads are common.