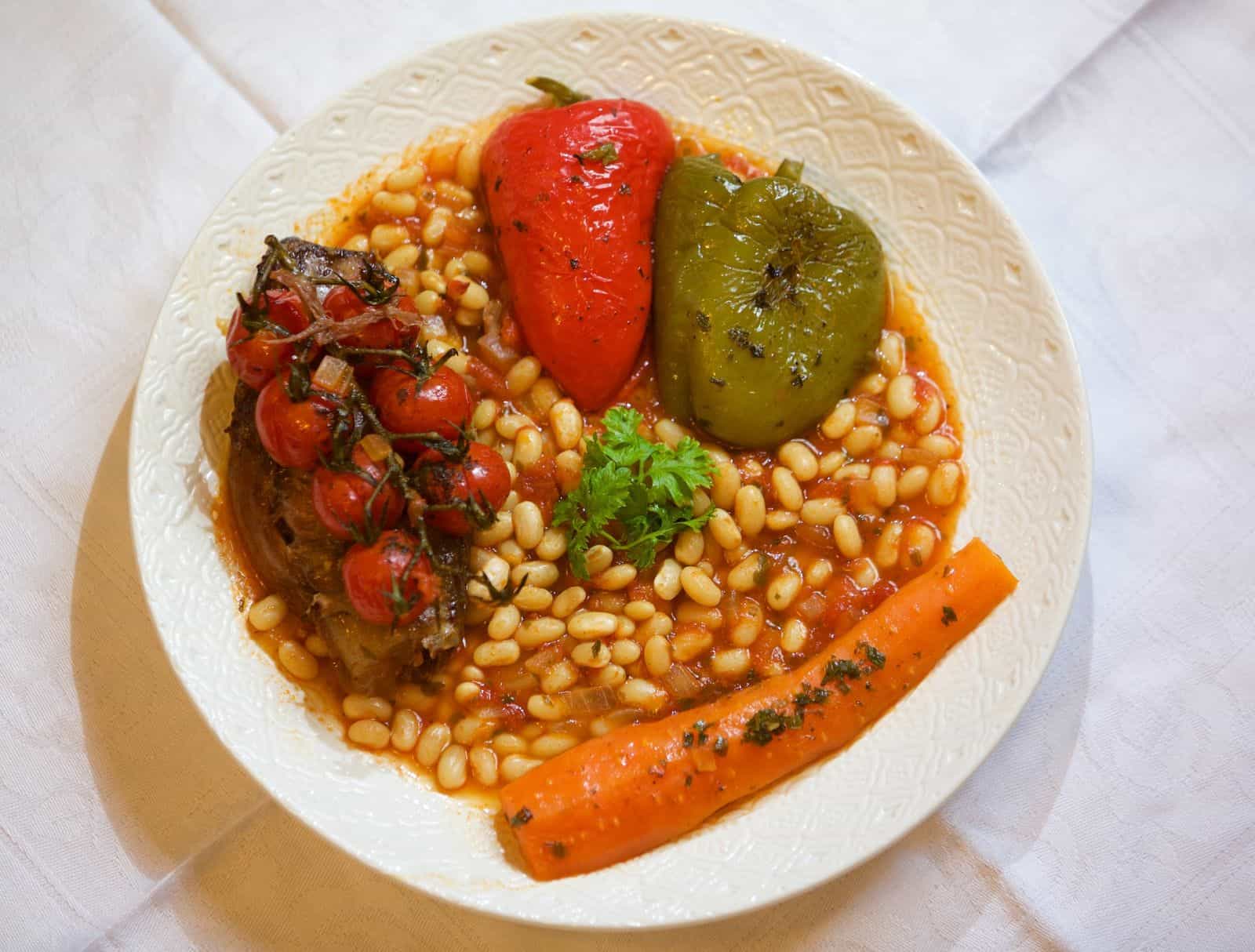 Beans are a prepper’s friend – whether dried or canned, and form one of the basics of food stockpiles. Baked beans are known to be rich in protein and fiber, help with gut health and can have a beneficial effect on cholesterol levels.

We all use baked beans, but not everyone is aware that the botanical name for the beans used is Phaseolus vulgaris, also known as common or navy beans. They became known as navy beans because they were a staple in the US Navy stores during the 1900’s.

When buying commercially prepared baked beans, check the labels carefully as you want to avoid ones that are high in sodium and added sugar. Many of the recipes collated below add extra sugar, so you don’t want to overload on salt and sugar with a product already high in these.

Often a person doesn’t even have the time, or sufficient power to cook items for long periods when hurricanes, earthquakes, or tornadoes hit. This is why the list below has some really easy cooking recipes that don’t take long at all.

For those who believe storing dried beans is best, then some recipes with a fairly long cooking time have been added.

If you have dried beans stockpiled, perhaps cook up a big batch and can them, so you have beans ready to use when the power is out and you need to cook quickly over a gas flame or a small wood fire.

Dried beans will last a long time but after 5 years much of the nutritional value within the bean will have depleted. Canned beans last three to five years, and although the expiry date may have passed they will be good to eat. Storage in a cool dry place helps with both dried and canned beans.

This is as easy as opening two cans, stirring in mustard and a little sugar. The sweet tang of the pineapple, adds to the canned beans that are enhanced with the sugar and mustard.

The recipe suggests baking in the oven for an hour. See how you go, but I would say this would be done within 35 to 40 minutes – enough time for the sugars in the pineapple to caramelize and combine with the flavor of the beans.

This recipe can be cooked in a Dutch oven over a campfire, or in your kitchen. Using pork for the meatballs gives a rich succulent taste, while the canned baked beans, tomato passata – also known as tomato puree, the crushed pineapple, peppers and herbs, add a satisfying deep flavor.

Parmesan sprinkled on top makes this easy recipe something special that can be served with rice, crusty homemade bread, quinoa or couscous. Get the recipe.

A variation on the usual cottage pie, this one includes baked beans for extra flavor. Although there seem to be a lot of ingredients you can substitute some – for example carrots can be substituted with butternut or sweet potato, the mushrooms with zucchini or eggplant.

Make use of what you have in your prepper garden or stockpile, as long as you include the beans and meat and top with the potato integral to this delicious recipe. Get the recipe here.

These are ideal to bake and pack for lunchboxes, or a day out in the wilderness – they contain beans and bacon as well as onion and cheese, wrapped in puff pastry.

If you don’t fancy making individual sausage rolls, make one large pie that can be cut and served at a family dinner – it takes far less time. Get the recipe.

Damper describes a wheat bread made by the early European settlers in Australia. The Australian Aboriginal people traditionally made their bread by crushing native millet, acacia seed and spinifex, as well as other seeds, nuts and roots, to form a flour, and baking it over the coals.

Fresh vegetables from the garden, including potatoes, pumpkin, celery, carrots and onions, go into this dish topped up with canned tomato soup, canned baked beans, fresh pork sausage, a bacon bone and bacon.

You can swap out vegetables according to what is in the garden, but I would suggest keeping the potato as it thickens the soup. This does not need to be made in a slow cooker – try it over a small camp fire in a Dutch oven, and let it cook slowly until the evening. Get the recipe.

Instead of doing the items separately – you know the classic baked beans, bacon, fried eggs and sliced tomato all sitting separately on a plate, this recipe combines them into one simply delicious dish.

Canned baked beans, canned tomato, mushroom, and bacon pieces are combined in a skillet with the eggs gently cooked whole on their bed of beans and tomato. Cheese grated over the top makes it a yummy breakfast!

This recipe doesn’t call for the addition of herbs, but if you have in your herb garden then parsley, oregano or basil would go well with this dish. Get the recipe.

This recipe uses tostada shells, but you could use any flat bread you have at hand, or you can make quickly, like this Moroccan Flat Bread, then add the chicken, coleslaw, canned baked beans and other ingredients on top and grill lightly.

The paprika and chorizo sausage add a smoky depth to this dish which involves preparing the canned beans and tomato on the side, then combining the tangy sauce with the grilled pork chops. Get the recipe.

Remarkably simple, yet remarkably tasty, this is as easy as adding the baked beans, ketchup and mustard to a casserole dish, placing the pork chops over the layer, and baking. Done! Serve with rice, couscous, or a crusty loaf, and a garden or foraged salad.

If you’ve caught fish for dinner, then try it Jamaican style with spices and chili, providing a bite to the baked beans in contrast to the more delicate flavor of the fish.

12. Baked Beans with Spinach and Eggs

Super simple, super nutritious – three ingredients and salt and pepper, all done together in a skillet, with the eggs whole. Get the recipe.

Baby carrots, baby potatoes, boneless chicken thighs and lots of herbs make this baked bean casserole super tasty. The beans come out of a can so it is super easy.

This recipe is made in an Instant Pot, but you can adapt to a Dutch Oven, or make in a casserole dish in the oven. Get the recipe.

You can either buy the Mexican flavoured cans of baked beans or add the spices yourself.

The recipe says to bake the chicken breasts, but it makes for a shorter time in the oven if you stir fry the chicken breast pieces with the onion and garlic in a skillet first, then add to a casserole dish with the Mexican flavoured beans and mozzarella cheese for a creamy bake.

Get the recipe here.

This is so easy – crisp up the bacon in a skillet, sauté the onions in the drippings, then to a slow cooker or a Dutch oven add the bacon, onion, five different cans of beans and leave for a few hours to cook.

The brown sugar and vinegar provide the sweet-sour flavoring of this dish. Get the recipe.

The olives and tomatoes bring an Italian/Spanish influence to this dish. Although the recipe does not call for baked beans as such but other types of beans… you can always substitute with cans of baked beans. Get the recipe.

Preppers will enjoy making this with the fish they have caught – redolent with onion, garlic, ginger and other seasonings, the stew is a hearty one.

You do have to check out the Jamaican presenter’s skill at opening a can with a knife, and his fingers so close to that hot oil! Respect man. And he does it all in a tiny little space which is what many people will have to contend with in bug out locations or when camping.

Of course, these are going to be good with a title like that. Into the casserole dish go ground beef, onion, baked beans doctored with ketchup, brown sugar, spicy brown mustard, soy and Worcestershire sauce, and then bacon is laid over the top.

In addition to the standard additions of bacon, brown sugar, and mustard, this recipe kicks the flavor up a couple of notches with barbeque sauce, cayenne pepper, Worcestershire sauce, onion and black pepper.

Don’t for a minute imagine that because a recipe is easy that it is insipid – this recipe adds green pepper, molasses, Worcestershire sauce, a couple of varieties of beans, red wine vinegar, and pancetta – the Italian take on bacon, with a dash of Tabasco to make for a punchy dish. Get the recipe.

This easy recipe uses maple syrup, barbecue sauce, bell pepper and paprika in addition to the usual seasonings. Get the recipe.

This is simple to make. The lamb cubes are tossed in seasoned flour, browned then added to the casserole dish with tomatoes, onions, bay leaves and thyme, with the can of baked beans added only towards the end of the cooking period. Get the recipe.

This takes a bit of time as dried beans are used instead of canned beans, BUT, as the lamb shanks take a while to cook you may as well cook the beans with them.

Just watch the level of liquid as the beans cook as they will absorb the liquid, and you don’t want to risk the dish burning. The addition of beer and molasses makes for a great flavor, but it does take about 3 ½ hours until it’s done.

This is a perfect meal to cook over a slow campfire in a Dutch oven, or cook at home on a cold day, and watch everyone’s noses twitching as the aromas float through the campsite or kitchen. Get the recipe.

The addition of a couple of extras, like mustard, a tiny bit of brown sugar and ketchup will make the canned variety taste more homemade – of course the addition of rashers of bacon on the top makes them even better. Get the recipe.

This canned baked bean recipe benefits from an onion, and syrup, in addition to the mustard, ketchup and bacon. Get the recipe.

If you have the time to prepare baked beans, the taste reward is worth it. This is suited to people in locations where they have access to cheap or free firewood, or plenty of gas as these do take around 7 to 8 hours to cook. Get the recipe.

Yes, making your own baked beans does take time, but it’s not like you have to sit and stare at the pot all day – you can return periodically to check on progress and pretty much carry on with other things.

The molasses and salt port add depth to the flavor of the beans. Get the recipe.

Use a skillet on the grill or campfire to get more of that smoky flavor into these beans. They take around 30 minutes and use three different types of canned beans together with the ground beef and bacon. Get the recipe.

Tired of the usual three bean salad? Try this simple salad recipe using baked beans and stuffed olives, green onions and small tomatoes, made with a simple dressing and garnished with sliced hard-boiled eggs. Get the recipe.