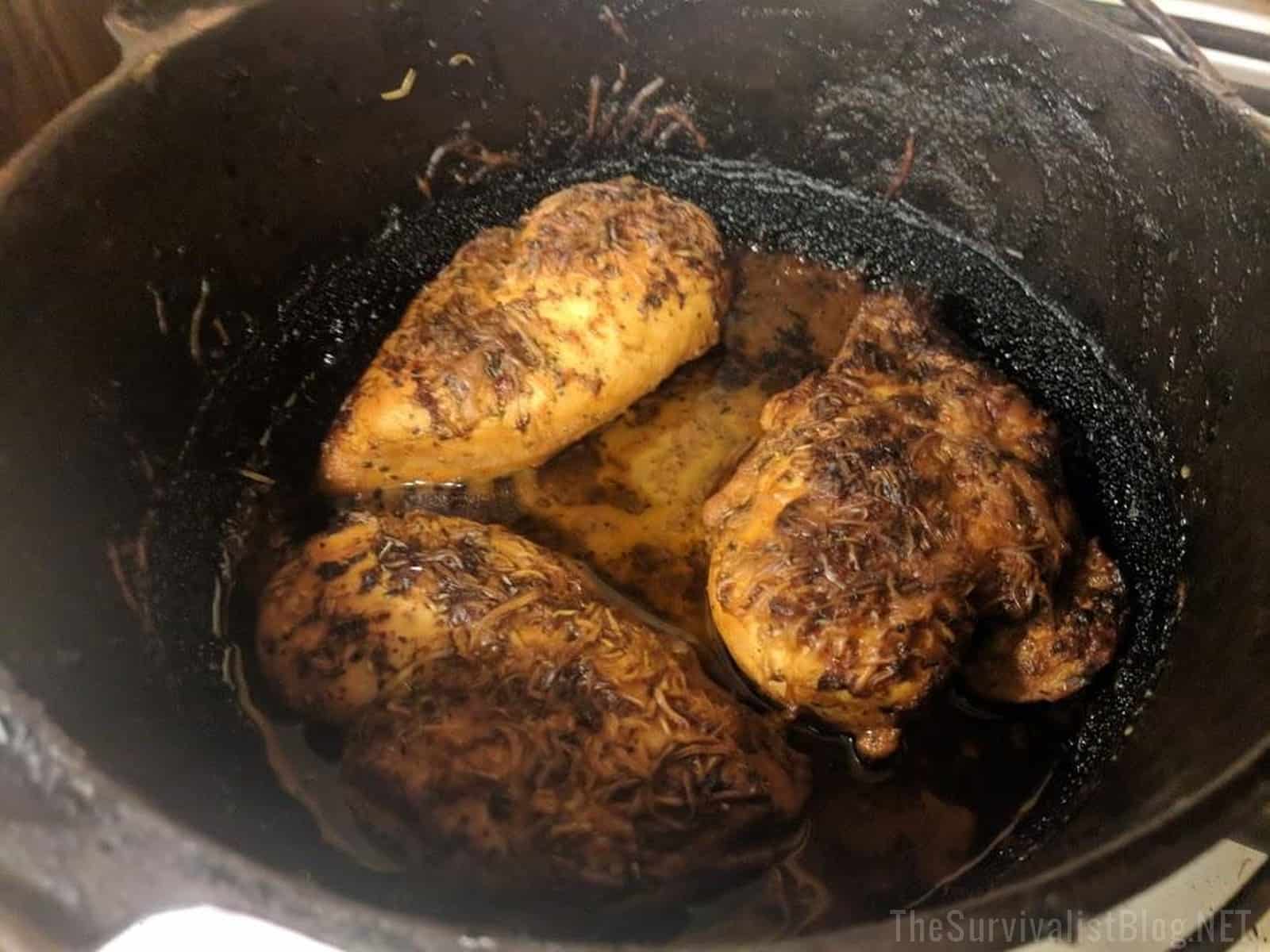 Cast iron has to be the best cookware ever!

Cast iron builds up its own non-stick surface after a few uses, is fairly easy to care for, and almost indestructible – many people are still using cast iron skillets and Dutch ovens that belonged to their grandparents.

Once you have your new skillet, or an older one handed down in the family, you’ll be wanting to try out some recipes – on your gas cooker, in your oven, or over a campfire – wherever there is a heat source your plain cast-iron skillet will serve you well.

Avoid using the ones with an enamel outer coating on a campfire or gas ring, as the direct flame can crack or damage the enamel.

Those fancy non-stick skillets probably last only up to 5 years – even less if someone uses a metal utensil to turn food, or cleans it with a scouring pad. Then thenon-stick coating starts flaking, resulting in uneven heat and even worse, if it is a Teflon coating, the release of chemicals.

There are other options, some of them quite pricey but as this article states, the best value for your money would be cast iron cookware.

In your skillet you can make everything from breakfasts – we have some very interesting and easy recipes when cooking for a crowd – to frying up the trout from a successful fishing trip for lunch, creating a hearty evening meal, and making pizza and pancakes, Native American fry bread, naan bread, and a whole lot more.

This Indian flat bread is great for mopping up the gravy from hearty stews, whether they are meat based or vegetarian. Flour, yeast and yogurt are the main ingredients for this quick bread that is pure, airy deliciousness. Get the recipe.

Garlic Naan in a skillet

The addition of garlic to the basic naan dough makes it very tasty. Get the recipe.

Besides the squirrels you’ll need cream of mushroom soup and buttermilk for this prepper’s recipe. Get the recipe.

Give that catfish some oomph with Southern spices – paprika, cayenne pepper, onion powder, and black pepper, together with the usual herbs from the garden like oregano and thyme add up to this super-tasty skillet dish. Get the recipe.

Chicken with Honey and Garlic

Quick and easy, this recipe calls for the addition of honey and garlic to create a rich sauce. Serve with foraged greens or a salad from the garden. Get the recipe.

Tired of cooking your catch on a stick over the fire – try this batter coated recipe in a cast iron skillet. Get the recipe.

Dice up the bell peppers from the garden for bright color, add a can of black beans and some mild salsa, break in the eggs and you have a one dish meal. Serve with tortillas. Get the recipe.

Rigatoni is that tubular pasta that ribbed like penne but has square cut ends and is a bit larger, so you can actually fill it – in this case with a mouth-watering two cheese mix, then baked in a tomato-based sauce, infused with herbs and sprinkled with parmesan.

Preppers will have the pasta stores, fresh herbs and tomatoes form the garden or balcony pots and then the cheese is the only thing you need to buy, or if you are on a homestead you’ll probably be making your own goat’s milk cheese. Get the recipe.

The recipe calls for turkey meat but you could substitute chicken. Angel hair pasta is an ingredient to think of adding to your stockpile as it cooks up quickly and is used in this dish along with the tomato.

Mushrooms add to the flavor but if you don’t have any fresh you can use dried mushrooms or substitute with another ingredient. Get the recipe.

Instead of a classic American breakfast, doing breakfast the Spanish way means everything in one skillet and a hearty vegetarian meal that uses only five ingredients – potatoes, onion, eggs, olive oil and flat leaf parsley.

All the ingredients, except the olive oil can easily be obtained from your survival garden, and chickens. Get the recipe.

The dish benefits from some extra carbs in the diced potato and some bacon for protein. Use your home grown baby spinach, eggs and cheese, to complete this hearty meal. Get the recipe. Get the recipe.

Not quite sure whether this would be served with meat or with ice-cream! Perhaps you could do both.

Butter, pecan nuts and/or walnuts, cinnamon, pumpkin pie spice and brown sugar over these sliced sweet potatoes makes for a delicious dish whichever way you eat it. Get the recipe. Get the recipe.

This one is definitely not to be served with ice cream. It would make a great accompaniment to a roast as you have the sweetness of the sweet potatoes. Get the recipe.

Pick some fresh blueberries, add some cream and orange juice, plus some store cupboard ingredients to whip up this delicious dish. Get the recipe.

All you need, to finish off this very tasty meal, all prepared in the skillet, that incorporates refried beans, chicken, sour cream (or Greek yogurt) red peppers, lime and salsa, is some guacamole – sorry that can’t be done in the skillet! Get the recipe.

If you’re in a place where shrimp is plentiful then this could be the place to use it. Get the recipe.

Jamie Oliver shows you how to do these in a cast iron skillet. You should have the crumpet rings to get the perfect shape, but other than some work in creating your own butter from cream by whisking until the solids separate from the liquids, they use basic ingredients including flour and yeast.

You can just use store-bought butter if you prefer! Get the recipe.

True preppers should be tapping their own maple syrup, picking blueberries from their gardens, and milking the cow on the property.

If you have these then you’re all set for these pancakes – but if you are not quite there yet adapt by using frozen blueberries, powdered milk and cane syrup plus the usual stockpiled ingredients to make for these delicious pancakes. Get the recipe.

Flour, eggs, butter, and five minutes to prepare, then into the oven to puff up this pancake, serve with whichever sweet berries you have foraged or picked from the garden, and maple syrup if you have been tapping your trees, otherwise cane syrup that you have stored will do. Get the recipe.

Bacon fat, cornmeal and fresh trout – what a finger licking combination! Get the recipe.

Flour and olive oil with the browned butter create this easy skillet recipe that benefits from the addition of pine nuts if you have collected some, and fresh scallions pulled from the survival garden. Get the recipe.

Use your cast iron skillet for this recipe that despite being unbelievably simple is also unbelievably delicious.

Serious preppers may want to substitute a small portion of the flour with cattail pollen or cornstalk pollen o make flour supplies go further and add a golden colour to the fry bread. Get the recipe.

Bacon, ground beef, macaroni and of course loads of cheese, this is a simple meal redolent with flavor. Get the recipe.

Pizza in a Skillet

Pizza is one of the top choices of food for youngsters. When prepping there is no need to go without this Italian treat. Homegrown herbs like oregano and basil will add to the flavor. If you don’t have a favorite pizza dough try this recipe.

All the ingredients you would normally put into baked potatoes go into this one dish recipe with bacon cheese, spring onions and sour cream to serve. Get the recipe.

Bell peppers, black beans and taco seasoning make this ground beef tasty – up the spice factor with the chilies and you have a one dish wonder.

The recipe uses instant rice – a good item to have in the stockpile as it cooks quickly and is great for adding to skillet and Dutch oven recipes. Get the recipe.

This is baked in the oven and is comprised of chocolate chips and smores melted into gooey decadence then scooped out with Graham crackers. You could make them outdoors if you have a fire that is not too hot and put a lid on the skillet. Then stand back as the dipping begins! Get the recipe.

This recipe calls for zucchini, green beans, fresh corn kernels and a bell pepper but you can change for vegetables you have harvested from your survival garden that will cook quickly. Get the recipe.

This simple dish is a meal on its own. Get the recipe.

This ultra-simple recipe uses just butter, salt, and pepper. So when there is deer meat around, aside from venison stews this is a great was to cook it on the stovetop or over a campfire. Get the recipe.

Wholewheat Bread in a Hurry

When you don’t have time for the whole kneading and proving that goes into traditional bread making you can get away with this 30-minute bread to accompany a meal or simply as a snack with butter. Get the recipe.

Simple to make these are an old Scottish skillet bread, and can be livened up with raisins to make for a sweeter treat and served with honey as this recipe recommends. Get the recipe.

Time to celebrate and you can’t go out and buy fancy cakes? All you need is your store cupboard ingredients plus a cup and a half of choc chip cookies ( Hope you stashed a lot of boxes of choc chips) to make this massive cookie that will guarantee everyone a slice of heaven. Get the recipe.

Most people avoid Brussels sprouts because they are simply served boiled – a pretty boring way to serve what look like mini cabbages – but if you roast them with some herbs and spices they are lifted to a whole new level. Get the recipe.