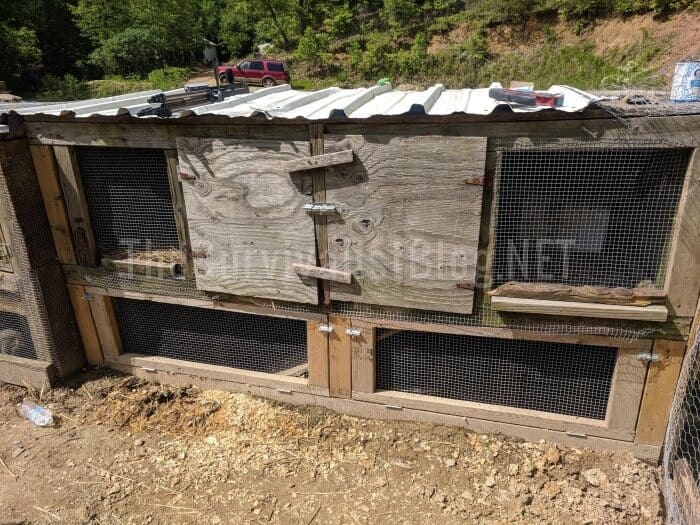 Chickens are a staple on nearly every survival homestead. You don’t have to live in a rural area (although every prepper should) to keep meat and egg birds as part of your food security survival plan. Self-reliant folks who live in a small town or even the suburbs can keep chickens or ducks – as long as you build the right kind of coop.

I am so proud of our new survival chicken coop. It could be made portable for bugging out or have retractable wheels attached to it to turn it into a chicken tractor as well. I opted to attached all three rabbit hutch style enclosures together to make one large and easy to clean coop – but these structures could be made individual and portable to suit your specific space or needs.

We made flap style doors on the now enclosed lower part of the freebie rabbit hut so it can be used for sleeping quarters or a run before the birds are turned out every morning.

The chicken coop that came with the property was lucky to make it through the past winter. My beloved hubby and his pal, Matty, turned a poorly built chicken coop into Fort Knox for me, but even their masterful retrofitting was only going to last as long as the underlying materials remained intact.

It was definitely time for a new chicken coop. I went “shopping” in Bobby’s junk pile and came up with all the materials I needed to build the coop except a little hardware and a few more rolls of hardware cloth.

We had two freebie rabbit hutches that formed the base of the coop, and then built another hutch to make the enclosure large enough to house our entire flock of ducks, chickens, and guineas.

This is the front of the rabbit hutch style coop we built to match the freebie hutch we lucked into.

It has two step locks, to ensure raccoons don’t flip a simple latch and garner access to steal my eggs or kill young chicks.

We put double decker doors on the front so the birds would have quick access to the run, and we could easily clean their habitat and get eggs.

Pressure treated 2 X 4 boards framed out a divider floor. A space was cut out to put a ladder with scrap boards screwed to it as steps, to help the flock members traverse their entryway.

The ladder was placed at the slightest angle possible and the steps close together so even young flock members could move about freely.

The top of the rabbit hutches were covered in chicken wire. It is only good for keeping birds in and not predators out, but it gave an extra layer of protection beneath the boards and sheet metal that we added next to protect the birds from both the elements and things that want to eat them.

Next came the metal sheeting. It was placed at a slight incline using trim boards so rain, snow, and ice would slide off the back.

Fresh hardware cloth was placed on the existing door and front panels.

The three hutches were connected together with pressure treated wood and hardware cloth. In the photo, a piece of particle board was used by a young tribe member. That was removed, and replaced with the proper type of wood board.

The flock members could run from the front to the back of the attached rabbit hutches on the bottom. The tops remained separate, and were enclosed with hardware cloth and pressure treated plywood – as were the exterior ends.

I wanted the top part of the small rabbit hutch to remain secluded so it could be used as an outdoor brooder and quarantine area for injured birds.

The bottom frame of the hutches and the large chicken run around the new chicken coop was trenched 12 inches deep and lined 16 inch wide stripes of hardware cloth. The hardware cloth extended beyond both the interior and exterior of the frame and run perimeter and covered in dirt to prevent digging predators from easily getting inside.

We chose not to do a layered metal sheeting, hardware cloth, and pressure treated wood floor to this coop (like we did to the last one) because we built the old run this same way and nothing got inside. Eventually, the wood deteriorates and the metal rusts, which leaves the birds in danger of predators and injury. A natural floor is also easier to clean, and prevents the spread of disease.

We reused the old run door. It is made of thick, pressure-treated wood and posts. It is lined with both sides using chicken wire, a two step lock secures it, and hardware cloth stretches beneath the lock to the ground and wraps around the door post – hooking onto a tea cup hook.

A solar motion detector light helps keep nighttime predators away. A dangling CD shimmers like a prism in the sunshine to deter hawks.

The top of the run was a double layer of bird netting. We added a layer of chicken wire on top, but could not add that until we moved my larger birds from the old coop to the new one with the younger birds, and could harvest both the door from their run and all of the chicken wire that comprised the side, top, and front of their day exercise area.

We used the newly-built rabbit hutch chicken coop side boards as a post for the door – saving time from digging out the old one from the existing chicken run. We took the winch on the Polaris Range and a pry bar to get the other post, door, and door frame freed from the old chicken run, but we got it out intact and were able to use it on the new one – a great time and money saver.

The more scrap material you have on hand, the cheaper this sturdy, predator proof, and easy to clean and move rabbit hutch chicken coop is to make.