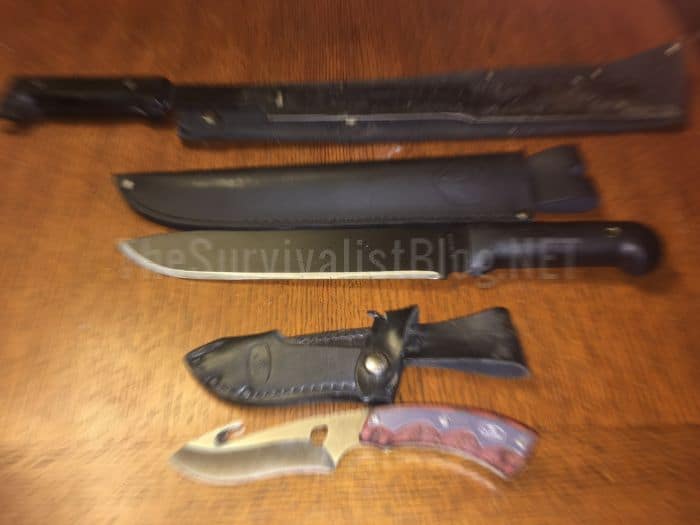 When you discuss knives – especially tactical and/or survival knives – there is always the possibility that the subject of self-defense will come up. When it does come up, it often seems like the people having the discussion don’t really distinguish between survival knives and combat/fighting knives.

What’s the difference between a survival knife and a fighting knife? Fighting knives are designed specifically for close quarters combat. The blades are typically narrow and thin to allow for easier penetration, and the edge is razor sharp. Survival knives are more of the ‘little bit of everything’ tools. Their blades are thicker to allow for chopping / batoning firewood, and other tasks.

What is a Survival Knife?

A survival knife is built for utility with a blade that’s meant to do a variety of tasks – usually apart from fighting. As such, the blades are usually made of carbon steels which don’t hold an edge as well as a stainless-steel blade, but they are easier to sharpen.

Survival knives are not usually coated and are balanced differently to something like a tactical/fighting knife. This means that they can be either heavy (for chopping) or light for finer work.

The handles of survival knives are designed to allow for a good, comfortable grip but with a less aggressive texture. The blade of a survival knife is usually very thick; made for processing wood/game.

When you Google ‘fighting knives’, you get many articles about tactical knives; the reason for this is that the two terms have become somewhat interchangeable. There is, however, a slight difference.

A tactical knife is a knife that’s built primarily as a utility tool – usually intended for military personnel – meant to fulfil a variety of needs, but which doubles as a decent weapon.

Over the years, the fighting knife has evolved to become a more multi-purpose blade, which is why the terms ‘fighting knife’ and ‘tactical knife’ are used interchangeably.

Treat all Knives with Respect

While we’re discussing fighting knives, I’d like to point out a few things. Firstly, any knife can be a ‘fighting knife’ – the term applies to the use. If you’re fighting with a knife in your hand, that knife becomes a fighting knife; but not all knives make good fighting knives.

Most survival knives are made of carbon steels which are softer than the stainless steel used in tactical / fighting knives. They’re also much thicker than fighting knives and may not have good piercing ability.

With that said, treat all knives with respect. Don’t get involved in knife fights, they’re ugly and there really aren’t any winners.

So, that’s the difference between fighting knives and survival knives. I hope you guys found this article informative and helpful to you. As always, I hope you enjoyed it; I certainly enjoyed writing it. Thanks for reading, and I’ll see you in the next article!

In addition to being a huge knife-nut, and good at shooting a bow, Greg has been farming ever since he was a little kid. He’s also a camping and hiking enthusiast.

4 thoughts on “Fighting Versus Survival Knife: What’s the Difference?”