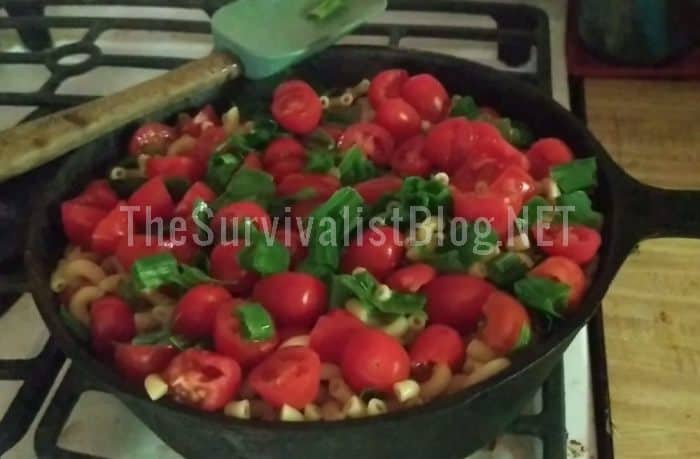 This is a super simple and quick recipe that makes great use ingredients that come fresh from the garden, are inexpensive shelf-stable commodities – or even foraged from the wild. This dish might not look like the most delicious 1-pot meal you have ever seen, but just wait until you bite into it – the combined flavors over a bed of pasta are absolutely incredible.

I call it a gypsy salad or goulash, because it reminds me of a pasta salad and I came across a version of the recipe I have adapted and made my own, while doing research on the Romani culture. 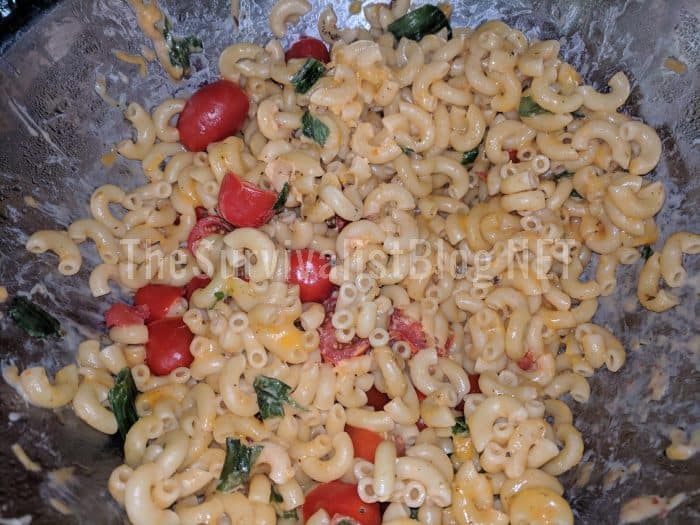 My ancestors on my father’s side include some Romani people…gypsies. That term is deeply politically incorrect now because of all the negative and largely unwarranted connotation it elicits. Have you ever heard or used the phrase “gypped” and maybe thought it was spelled, “jipped” to note someone is getting short-changed or having something stolen from them?

Well, that slang refers to the wrongful idea that all gypsies were thieves. Anyway, I won’t get into a history lesson here, I just wanted to give credit for the basics of the recipe where they were do, to the Romani who fled persecution in nation after nation, but still remained a close-knit tribe of extended family and friends.

Gypsies made use of foraged food, items they could barter services for that could be preserved for an extensive amount of time, and could be grown in a short amount of time, often from hanging pots.

The Gypsy salad is made a lot like vegetable soup, chow chow, or piccadilly relish in the sense that you can use basically anything you have on hand to create it – varying it as much as you want from one time to the next. 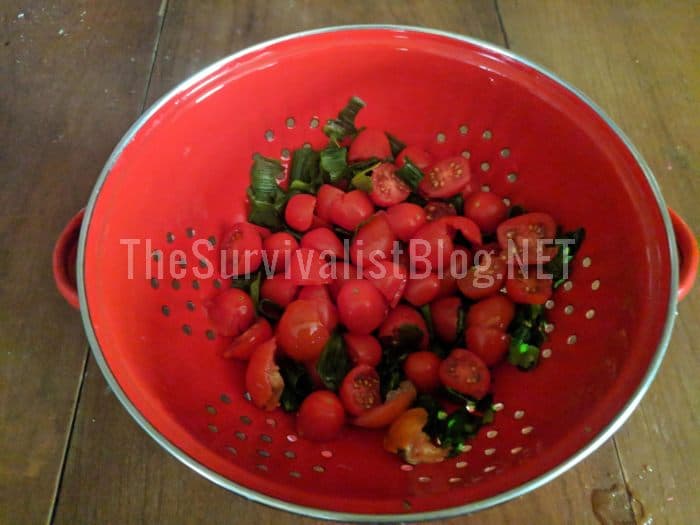 What makes this such a superb prepper recipe is the fact that the majority of the ingredients can be stored together inside of a mason jar, with a packet of the rest of the dry powdered ingredients attach to the side of the jar in a pouch a piece of tape – all prepper’s worth their salt have plenty of duct tape around…right?!

There are no true measurements for this recipe, merely use the ingredients you toss into the cook pot after boiling the paste proportionally to the amount of pasta, to taste, and/or making do the best you can with the ingredients you have on hand or can forage.

If you are going to make Gypsy salad as a survival Mason jar meal, dehydrate the onions, tomatoes, and any other greens or veggies you want to throw in at 130 to 135 degrees for about five hours – or until dry and flaky. 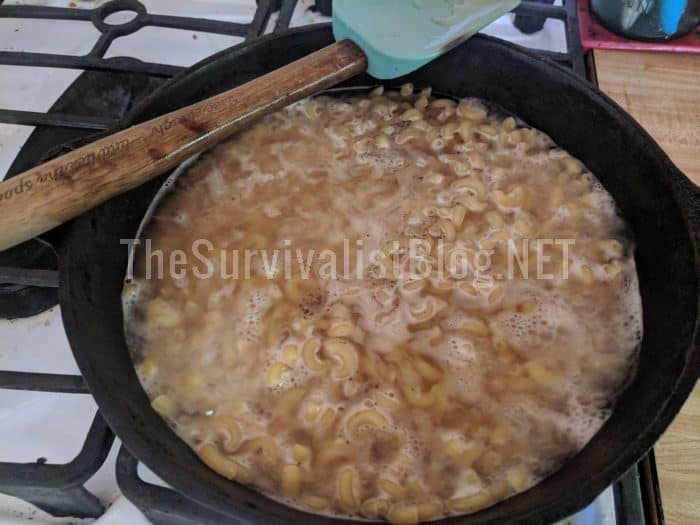 The water in the pot and the pasta look a little tinged because I like to sprinkle some oregano and garlic powder into the pot while the pasta is boiling.

• 1 pound of pasta
• 1 cup or so of green onions diced
• 1 couple handful or cherry or grape tomatoes or diced tomatoes
• 2 Cups of shredded cheese or up to 1 cup of powdered cheese – or to taste
• 2 pinches of garlic powder
• 2 pinches of oregano
• 1 pinch of basil
• 1 pinch of turmeric
• Optional – 1 pinch of thyme or rosemary or a combination of the two.
• Optional – up to a ¼ of a cup of diced onions or peppers. 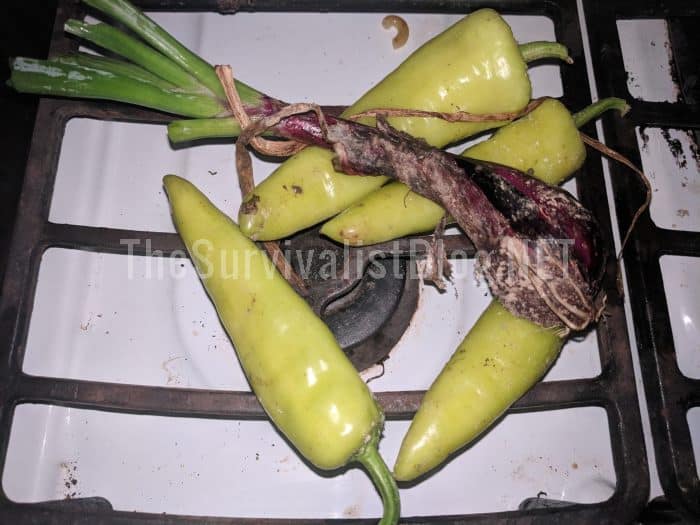 Best Foraged Greens To Use In Gypsy Pasta Salad

Purslane is both tasty and filled with beneficial nutrients that also contain medicinal properties: 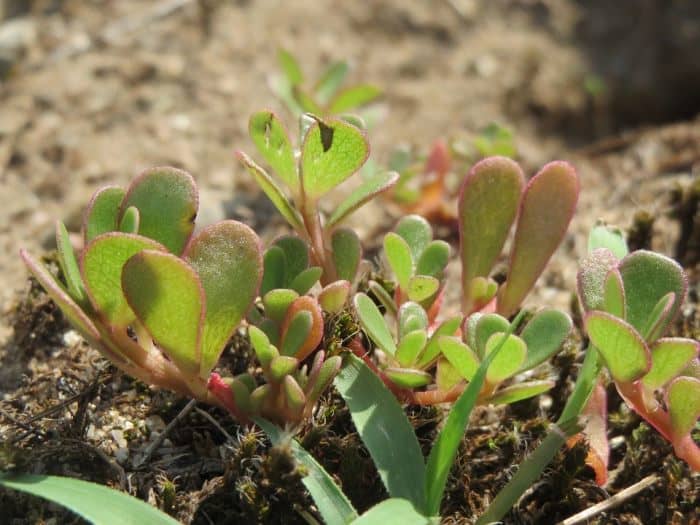 1. Boil the paste – add a small amount of garlic and oregano to the pot while boiling (not counted in the recommended measurements) if desired.
2. Drain the pasta.
3. Pour in the green onions and tomatoes on top of the hot pasta and allow to settle for about two minutes.
4. Stir the pot to combine all of the ingredients.
5. Stir in any foraged greens.
6. Pour the cheese on top of the mixture.
7. Sprinkle the spices on top of the cheese and combine.

The salad tastes best when all of the ingredients are combined while it is still warm. I often toss in some pepperoni and feta cheese when making this pasta dish. If you are eating the entire pot while it is warm or in the same evening after it cools, it should not have a dry taste.

But, if it is stored in the refrigerator to consume later as leftovers or if you are making it ahead for a later meal, salad dressing of some type really needs to be added to avoid dryness. I have typically added either a simple homemade oil and vinegar dressing, lite Italian dressing, or ranch dressing to the pasta dish to either combat dryness, or just because it enhances the overall flavor.

I have successfully dehydrated ranch dressing (130 for about 7 hours) using a plastic liner sheet in my dehydrator and spreading it onto the sheet very thinly, like to do when dehydrating cottage cheese or sour cream.