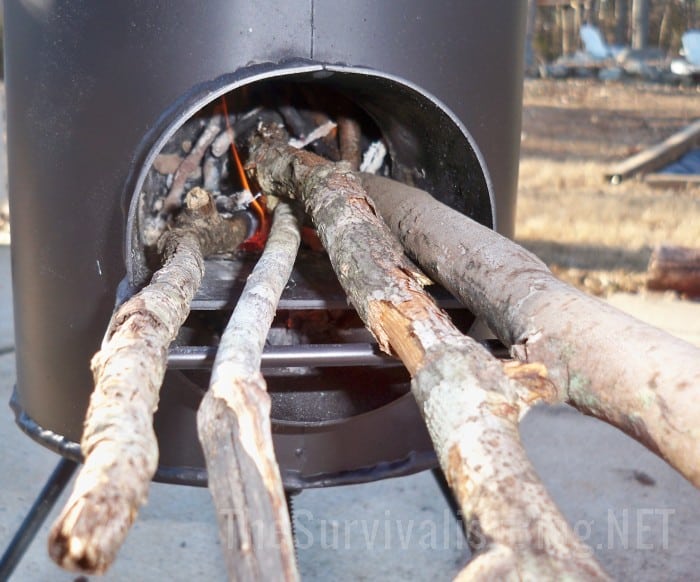 Rocket stoves are efficient and hot burning stove concepts and products you have doubtless heard about if you’ve been involved in prepping these past few years. I say both products and concepts because rocket stoves are not just an item you buy over the counter to toss in your bob.

Rocket stoves are pretty easily made out of all kinds of common materials and what’s more generate fantastic amounts of heat for very little fuel. Sounds like a winner. So how do they work?

Rocket stoves generate such incredible heat on so little fuel by being incredibly efficient. Compared to a conventional fireplace or wood stove, a rocket stove generates almost no smoke. This is because the particulate we normally see coming off a fire in the form of smoke is actually fully combusted in a rocket stove design.

This is accomplished by the design of the stove: volatile compounds along with a bunch of fresh oxygen are drawn past the fuel chamber and into the horizontal burn tunnel where they combust completely. The resultant heat races into the heat riser, or chimney, where it roars upward to warm or cook whatever is attached to the system.

The adaptable design of rocket stoves is what makes them so compelling and such a great idea for prepping: they work on the small or the large scale, and can be used for cooking, heating and other purposes.

In fact any application were you need a tremendous amount of clean-burning heat using very little fuel compared to other kinds of stoves.

Understanding the principle behind a rocket stove is almost as important as actually owning one, since you can make your own pretty easily out of commonly available materials.

The most common design of rocket stove looks like a capital letter j when viewed from the side. A short, open vertical riser of the J’s foot is the feed tube, or fuel chamber.

Compared with other stove designs which severely limit the ingress of oxygen, the feed tube of a properly built rocket stove is wide open allowing a tremendous amount of oxygen in to facilitate combustion.

The bottom, horizontal connecting tube of the J is the burn tunnel this is where combustion actually takes place and the flames from the burning fuel crackle.

Those flames will shoot into the opening of the longest vertical member of the j, the heat riser, or chimney, where a tremendous volume of extremely hot air will race upward, rapidly heating whatever is attached to the system to extremely high temperature.

One essential element of the rocket stove design is the thick insulation layer around the entirety of the feed tube, burn tunnel, and heat riser.

This insulation allows for very little heat loss, and in conjunction with a tremendous mass of constantly flowing cooler air is perhaps the rocket stove’s most famous benefit: incredibly high temperature from a small amount of fuel.

A properly designed rocket stove is so efficient a few twigs, yes, twigs, can easily cook a complete dinner or heat an entire room in your house.

The interior lining of the stove is almost always made out of metal of some kind, either sheeting bent into shape or purpose made tubing, and the insulation layer can be made from anything from dirt or clay or heat resistant, man-made material.

Comparing conventional “straight pipe” stoves, ones where the heat riser or chimney is directly over the fuel chamber against the rocket stove we can begin to see the differences and how they support combustion.

When fuel is burned, and in this case we are talking about wood, compounds that are not fully burned are released in the form of particulates that are airborne, what is commonly called smoke or soot.

Smoke is released because in conventional stoves not enough air reaches the burning fuel. This is especially prevalent if the intake is throttled down to its smallest size. If less oxygen reaches the fuel, you have a cooler burn.

A cooler burn means more unburned particulates i.e. more smoke. In this equation that means wasted fuel, and loss of efficiency. Smoke is always associated with fire from long experience with it, but when your fire is burning close to ideally you will have little or no smoke!

This is where a rocket stove leaves a conventional one in the dust. As fuel starts to burn, and the hot air rises through the chimney, incoming cool air moving for the fuel chamber is drawn ever faster into the burning fire.

More incoming air provides for higher temperatures, and more complete combustion, the particulates that would normally make up smoking a conventional stove are burned up in this reaction, providing even more heat and sustaining the reaction until the fuel is consumed.

It is this fact that actually lends the rocket stove its name. The air moves through the stove so quickly a great roaring or whooshing sound, like a rocket, is heard and the flames licking through the burn tunnel appear as the contrail that’s coming out of an airborne rocket engine.

I’m continually surprised that rocket stoves are not more popular in the U.S. than they are already. These systems deserve a place in preppers arsenal’s for several reasons:

Rocket stove plans are abundant in print and online. Make sure you take the time to get familiar with this ingenious heating device and add it to your prepping repertoire!

Rocket stoves function by drawing large quantities of air over a relatively small quantity of fuel, burning it almost completely, and then channeling the ever-increasing heat up a large vertical heat riser to whatever device is connected to the end of the system.

These clean and hot burning stoves are marvels of efficiency and are a perfect addition to any prepper’s survival plans.

5 thoughts on “How Does a Rocket Stove Work?”