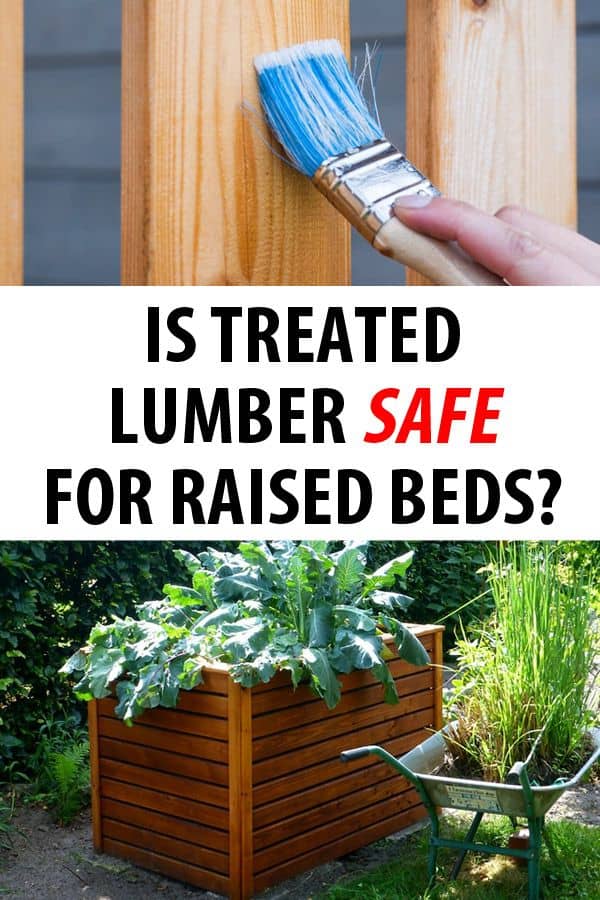 Over the years there has been a lot of talk about pressure treated lumber and its use in gardening, and specifically for raised beds. Like most things, the more people talk about a particular topic the more the truth gets diluted, and the myths and incorrect facts get shared as truths. In this article we are going to look at what exactly is pressure treated lumber, is it all the same, and whether it is safe to use in gardening.

What is pressure treated lumber?

Pressure treated lumber refers to many products on the market that have been treated with chemicals that make them resistant to rot. They accomplish this by applying compounds that contain a fungicide to prevent soil bacteria from colonizing on the wood and an insecticide to prevent insects from attacking the wood.

The process to create pressure treated lumber is slightly complicated. The wood is first milled as a standard board would be. The lumber is then immersed into a solution and then subjected to high pressure. The pressure helps the chemical compounds drive deep into the center of the wood. This deep penetration of the preservatives is what keeps the pressure treated wood from rotting longer than lumber treated with a topical sealant.

Pressure treated lumber is used for fence posts, garden beds, decking, playground equipment, and many other structures that are either partially below ground or have significant exposure to the elements.

Why would it not be safe?

The concern is that the chemicals that are used to treat the lumber can leach into the soil. If this occurs, then the chemicals or their byproducts could be taken up by the plants and potentially end up in the harvested crop and consumed. Depending on the specific compound and its bio-availability, this could cause illness or toxicity.

This issue first came to light in the late 1990’s and has been an ongoing debate ever since. In 2001 U.S. Consumer Product Safety Commission (CPSC) and the EPA began to receive petitions and requests to ban CCA for building playground equipment due to the potential health concerns. Some people also wanted the wood prohibited in all commercial growing operations and demanded the government conduct studies on its safety. The pressure treated lumber available at this time, and the focus of the petitions was treated with a product called chromated copper arsenate or CCA.

Chromated copper arsenate is a chemical wood preservative that was first used in the 1930’s. It contains chromium, copper, and arsenic. It was developed by an Indian scientist names Dr. Sonti Karmesam and was first patented in Britain in 1933.

Most concerns with CCA was with the ingredient arsenic. Arsenic and its compounds are toxic to humans, and is bioaccumulative, meaning small doses can build over time. When combined with the fact that the arsenic compound arsenate is a phosphate that is readily taken up and transported by plant tissues you have the makings of a significant health issue.

Following the public outcry and further in-depth studies that were being performed on CCA and the possibility of arsenic leaching into groundwater and soil, the US government decided to act.

In 2003 the EPA and many of the major organizations of the lumber industry reached an agreement on the issue of CCA. The manufactures of CCA lumber submitted voluntary cancellations relating to the proper uses listed on the manufacturers’ labels to the EPA. On December 31st, 2003 official statements were released from the EPA, and production of CCA-treated wood in certain applications became a violation of the manufacturers’ labels. This action halted the use and sale of CCA treated lumber for any residential use.

Alkaline copper quat (ACQ), and copper azole (CA-B) are two of the currently used to produce pressure treated lumber for residential use in the United States. Neither product contains arsenic, which was the source of the concern about CCA, and instead utilize copper. Both have been proven to be just as effective at protecting lumber from insects and ground fungi, and have been in use for many years now.

Alkaline Copper Quaternary is a water-based wood preservative that contains copper as a bactericide and fungicide. A quaternary ammonium compound, or quat, is used which acts as a biocide, increasing the tolerance of treated wood to copper-resistant bacteria and fungi, and also acts as an insecticide. ACQ has been widely used in other countries and is used for a wide variety of outdoor, high exposure fixtures. ACQ is believed to be safe, even though some studies have identified copper leaching into surrounding soil. ACQ does cause an increase in oxidation on metal fasteners, so the use of galvanized or other resistant fasteners is recommended.

Whether it is safe or not is a personal decision. All of the studies have shown that it is not harmful to humans to use the newer pressure treated lumber in garden beds. However, studies have also shown that the chemicals used can leach into the soil. So it is possible to get undesired and unwanted chemicals into your soil. So is it safe, yes, but its also not without drawbacks. If you do use any pressure treated lumber, you would want to use thick plastic or some other barrier between the soil and the wood to be on the safe side. A barrier would not only prevent the dirt from making contact with the lumber but also help extend the life of the lumber by reducing the water exposure.

So to make your decision, you are going to have to weigh the pros and cons of using it. For me, the availability of alternatives means that I would probably not use it. But let’s talk about some of the other options so you can make your own decision.

There are several different alternatives to using pressure treated lumber to build raised beds. Some have the same look and others are a different approach altogether.

Certain woods such as cedar, black locust, redwood, and cypress, are naturally less prone to rot due to the oils in the wood. These woods are often considered to be very ornamental as well, which is always a plus in any project. The downside here is that many of these woods have been significantly overharvested, which has driven prices quite high compared to other products. Because the woods are considered more valuable, they are often saved from demolitions. If you were to decide to use one of these types of wood be sure to check out your local reuse stores and ask about reclaimed wood.

There are several composite materials on the market that are starting to garner some attention. These materials combine plastic polymers with wood pulp or other matter and create a product that can be used in place of lumber. Trex, Azek, and BamDeck are three of the most popular. BamDeck stands out due to their use of fast-growing bamboo, which is technically a grass and not a wood. Azek will not scratch, dent, or scuff due to their unique blend of polymers.

No one says a raised bed has to be made out of wood. You can use masonry products such as brick or concrete block, or you can use natural stone. A raised bed built out of these materials would last almost indefinitely and have little to no maintenance.

What if I already have CCA?

If you already have raised beds that are built with CCA treated lumber, then your first instinct might be to rip it out, and I understand that. However, you may want to look into it first.

Most municipalities now treat pressure treated lumber as hazardous waste. This designation means that dispose of the wood you would have to go through your local processors hazardous waste disposal process, which in a lot of areas can be quite daunting, and possibly expensive.

The best course of action would be to install a barrier like thick plastic. This solution would also include you removing the old dirt and disposing of it as well since it could contain the leached chemical compounds.

When it comes down to it using pressure treated wood or not is really up to your personal feelings of its safety, the type of wood you want to use, your intent for the beds, and their design. However, I would like to say that this article is my opinion on the issue after a significant amount of research.  You may want to research on your own before making a decision about either using new wood or removing old wood.

The US Consumer Product Safety Commission is an excellent resource that has specific information on CCA; its use in outdoor structures such as decks and playground equipment, as well as the newer preservatives ACQ and CA-B.

For looking at health concerns, the US National Library of Medicine National Institutes of Health has a lot of compiled studies and research.

Finally, if you are concerned about the environmental impact or sourcing of different types of timber, The Forest Stewardship Council has a wealth of information.

I hope this article helps you understand the different types of pressure treated lumber and its use in gardening. Best of luck.

Born and raised in Kentucky, Steve grew up deep in the mountains on a family farm. After college, Steve spent over 15 years working in public service and has experience in Fire, EMS, and Law Enforcement. He has also worked with training and deploying search & rescue and service dogs for utilization in a variety of services.

Steve is also a Scout Leader with the Boy Scouts of America, and works to teach preparedness to the next generation. Steve has worked with and taught firearms and self-defense in multiple venues, from tactical applications to long range shooting, and also has extensive training in first aid and wilderness first aid.

An active prepper, Steve has devoted hundreds of hours to mastering and teaching skills and techniques for use in survival, homesteading, and general preparedness.

1 thought on “Is Treated Lumber Safe for Raised Beds?”