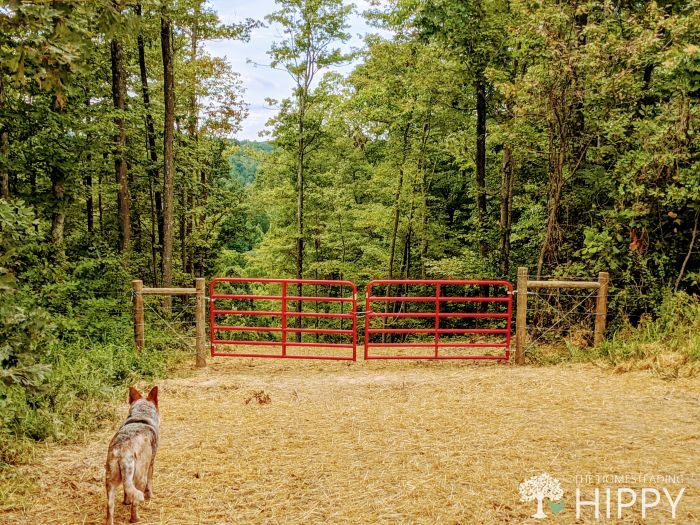 Hello Pack. It has been an incredibly busy week here on our survival homestead. The gas company pipeliners are now finally all done working across our land and using our farm road as a temporary access road.

The workers were all very respectful of our land, and waved at the grandkiddos every time we rode up near the worksite on the side-by-side so they could watch all of the heavy equipment in action.

The back half stretch across our upper pasture that was part of the existing gas company lease and was used again for the new pipeline project has been seeded and covered with straw, and will hopefully be growing robustly as soon as we get the rain we are supposed to this weekend.

Fencing and gates are back up on the sides of the property that had to be opened up for work and pretty new gates (shown in feature photo) block the temporary access road leading into the pasture.

That area was heavily wooded before but now we have both standing timber heading off the sawmill and firewood cut from the space as well as a nice new trail road for hiking, ATVs, and horses.

The pathway is still highly obscured by woods, and not accessible from the front part of the property, which is a huge OPSEC bonus.

Firewood splitting and stacking is going on in earnest now in preparation for colder weather that will unfortunately be here before we know it.

Canning and dehydrating the bounty from our garden, apothecary patch, and foraging also kept our tribe quite busy this week.

Now that the pipeline project through our land is over, we can finish hauling down the timber that was cut along the upper pasture, and use the funds from it to get Bobby’s new workshop built.

Hopefully, the concrete pad will go down next week, and once it has cured the three shipping containers will be placed in a “U” type shape.

Next, a roof will be built across the two side shipping containers so equipment can be driven up onto it for work outside of the weather.

A little porch will be built onto the front of each container, one will be used for blacksmithing and the other for pottery, as I believe I have mentioned before. A new reloading shed will also be a part of this ongoing project.