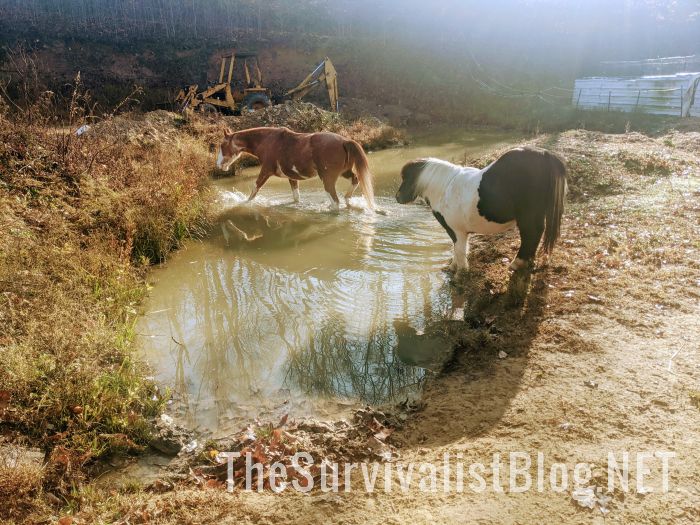 Hello Pack. I hope you all are weathering the political upheaval in our great nation well. Odds are we will be sitting on pins and needles possibly through at least the beginning of December.

Until all the legal challengers to uncover and prove election fraud are done, the presidential election results cannot be certified. Fingers crossed there is enough proof to bolster the legal challenges and enough Americans who actually love our country voted, and we will be saved from a disastrous fate.

We got a lot of prepping done this week with the continued good weather. This is the first time in several years I think we actually had more than a week of fall in our region. We had been going from summer almost straight into winter – with massive amounts of rain in between.

Expanding one of our ponds finally made it to the top of our survival homesteading “to do” chapter book of a list. My beautiful and willful mare, Ruby, loves to play in the water – as you can see in the feature photo.

The old backhoe in the back of the image is not a looker, but it runs more often than not, and I hope to have a deep and large pond between the barn and the chicken coop very soon.

We are blessed with natural water sources on our homestead, a must for a self-reliance minded family that does not want to be left at the mercy of municipal utilities during a long – or even a short, termed disaster.

We have the woodshed completely full, and a massive amount of chunks cut from trees the gas company cut down, all heaped by the splitter in front of the woodshed to replenish as we the firewood this winter.

The electric furnace was only two years old when we bought this place, and has only been turned on twice – once when the former owner put it in when prepping the place to sell and as a test and once by us for the same reason.

There are two wood stoves here and several wall mount gas heaters connected to the extra large tank we have filled twice a year. We do not have central air, and that thrills me. Living in air conditioning makes you soft.

The concrete floors, poured concrete walls, and the positioning of our house in-between the hills on two sides keeps it naturally cool even during the hottest months of the summer.

I have always preferred windows and doors open and fresh air flowing in to air conditioning – much better for your immune system too, I figure.

The butcher shop cleaning and organizing project is still underway. I will hopefully never have to hear again, “… somewhere in the butcher shop” when I ask where a needed supply is. We are finally almost done with all of the prepper inventories we started.

The “Stop The Tires” trucker strike is getting a lot of folks around here nervous about supplies, and hitting the store shelves pretty hard … but they all still support the efforts of the truckers to make an anti-Biden statement over fracking, oil prices, and insane regulations placed upon their industry.