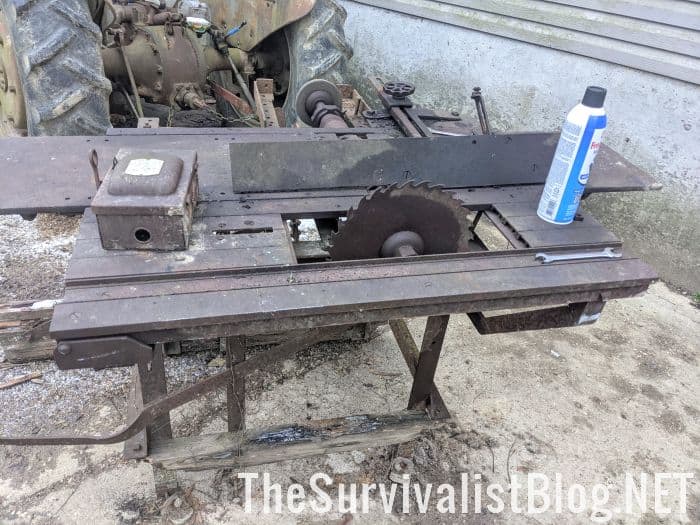 Hello Pack. I hope you all have stayed warm this week. We have had a constant ebb and flow of a little snow, freezing (Yeah – hard ground to walk upon!) and then mud – lots of mud.

During the winter we do not do a lot of outdoor prepping because the wood and hay have already been put up, and it is still too early to start seeds.

This time of year we are typically busy with fence maintenance and minor repairs to the barn and other buildings – and serving tractors and other equipment.

This time of the year we do a lot of self-reliance learning, shopping, and inventory checks. One of my beloved’s best and most recent prepping related purchases is an antique wood planer.

He and some of our tribe members are working on it right now. She is a rusty beauty from the late 1800s. This simple machinery will work as well as a modern version, but is both hardier and easier to work on.

The matching attachments from the same era that were also subsequently scored to go with the antique wood planer include a cutter, lathe, grinder, and the separate companion sawmill piece. We will be able to take trees from our land and make our own lumber – quite an awesome resource and prep.

There are still two big piles of logs, both hardwood and softwood, that the gas company cut down that we have not gotten to yet. Turning some of those into board’s will be a wonderful money-saving asset to use to build a new reloading shed – and a host of other projects.

I had the pleasure of chatting with GrammyPrepper on PrepperNet the other night. It was fun to run across a Pack member outside of our group of commenters here. PrepperNet has been a vastly growing online community of preppers across the country for about five years now. I think.

Initially, PrepperNet used regular social media platforms and MeetUp like a lot of other prepper groups. But now, PrepperNet has its own platform and even a mobile app! You can join groups from your state and region, prepper topic focused groups, and interact without mainstream media overlords.

Sure, there are rules about behaving decently and not doing illegal – common sense stuff and not politically correct micro-managed conversations. It is an online community for preppers by preppers and offers members the freedom to be themselves in a welcoming environment.

In other preps this week we are continuing to work on the Old School Survival Boot Camp event. This has become nearly a full time job, but this labor of love will be worth it.

When we created the tagline – “3 Days That Could Change Your Life” it wasn’t just a marketing ploy, it was an honest assessment of what attendees should expect from experiencing the hands-on training and mingling with like-minded people from Ohio and surrounding states.

The January special that runs through the end of the month offers military and first responder families – including veterans, Gold Star families, retirees, and volunteer firefighters, 50% off tickets by using the code: American Heroes at checkout.