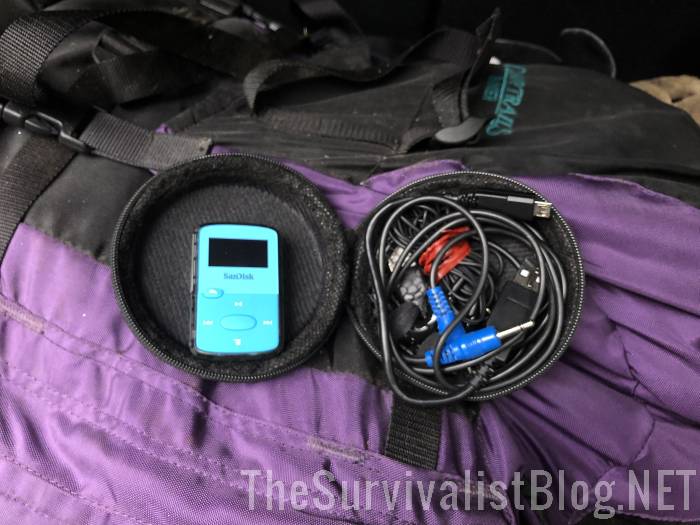 Hey, pack! Hope you had a safe and productive few weeks.

Time to talk about killing time. Or rather occupying your mind during the long boring hours.

The past six weeks have had a lot of body-busy time that has also been downtime for the noggin. That being said, I have a hard time with too much time in my own mind.

A good part of my 9-5 is pretty heavy thinking. In the off-hours, I do a bunch of writing (which I hope you appreciate my articles). This can also require a bit of thought.

The next largest portion of my day is driving. I spent about 3 hours a day commuting. On the weekends, especially at our off-grid place, I log a lot of hours mowing. On top of this daily cadence my work travel has found me in a car or flying… A lot.. 20 hours this week. Over 30 hours two weeks ago.

While these require concentration, we’re not talking Mensa-level thought.

This brings me around to survival situations. I know all the prepper books out there paint a fast-paced picture; I feel reality will be very different.

Survival is a lot of mundane, boring stuff. Cutting wood, hunting, etc. all require a lot of time. The question is. How do you pass that time?

As I said, I’m not so good during the quiet hours. I need something to keep the brain occupied.

I grew up listening to old-time radio. I’m not that old. I caught the second wave.

There is nothing like getting an education or disappearing into a fantasy world while your body is on autopilot. Audio books are even better. I once spent almost two years listening to the complete series for Game of Thrones, Harry Potter, and Steven King’s Dark Tower.

I’ve mentioned in more than a few articles that one of the most important preps in my BOB is an MP3 player and 1500 hours of old radio plays. I’ll have a long walk home if things come to a sudden stop and I plan to be occupied.

During emergencies, your brain can get going on questions that you just can’t answer. What is the family doing? Have I done enough to prepare them for this? I choose to have one earbud in keeping that part of the brain occupied and my blood pressure down.

It’s not all entertainment though. There’s a great deal to learn via audio. To fill my driving and mowing time, I listen to a lot of prepper podcasts. PrepperNet, Prepper Broadcasting Network (Hi James), Forward Observer, Survival Preppers, Prepping 2.0, Prepper Recon. And the list goes on.

So, think about how you will keep yourself entertained and occupied during the down hours of a crisis. For me it’s an audio activity and I have prepared accordingly!

Questions for you this week.

Thanks for joining me on this prepper’s journey. I hope to see you in the comments section!