This has been a long, long, week in a series of long weeks, fellow preppers. We have had tribe members and workers in the house all week as part of our “make the austere lodge look like a home” project.

I am counting this as a prep because even though they are cosmetic projects, we save a ton of money by using materials from our property – old barn wood, tin roofing, and scrap plywood to do all of the projects.

This photo of the bathroom poured concrete wall shows the covering of the cold and bare wall in progress. Trim boards will be placed on the top and bottom when that wall and the rest of the exterior walls in the house, are all covered in barnwood panels. 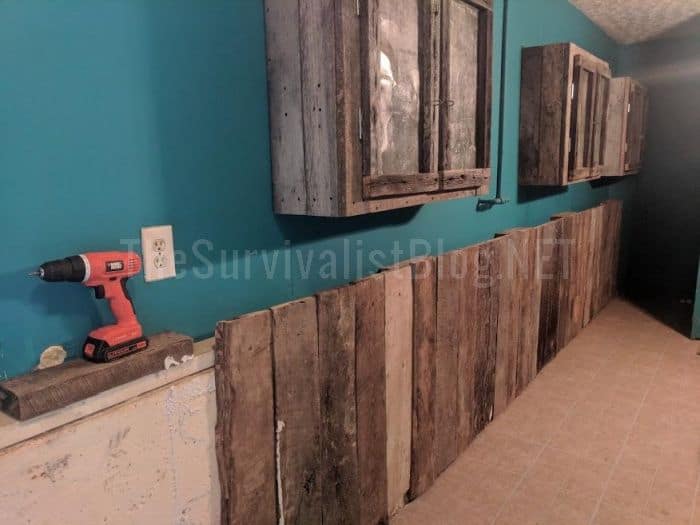 We ripped out the circa 1985 laminate faux butcher block countertops and have homemade ones now. I love how they turned out. The old dishwasher was yanked out as well to make room for more storage. The add-on lower cabinet will be made out of barn wood and plywood also and match my new microwave stand with ample storage.

With two grandkiddos having birthdays this week, that also required some time spend away from work and prepping. Crosley turned eight and Ariyah turned one year old.

At least two of my Buckeye chickens now have some vague idea they are supposed to fly. This morning one young rooster and one hen were sitting on top of their waterer and it as a bit too tall for them to have merely jumped up there.

We did a lot of winter livestock prep this week. Stall mucking and spreading out lime and then topping it all with straw to keep them warm on these super chilly nights we have been having was a must do, no matter what else happened this week. We didn’t have any more of a fall than we did a spring this year. We went from a horrible winter to summer and then straight back into winter again.

Our main garden and auxiliary growing plots got some winter prep this week as well. We are contemplating a winter cover crop for the primary garden. We haven’t quite decided yet what to plant, and are running out of time to do so.

My homesteading friend Sarah and I rendered lard yesterday – along with six kiddos who had not helped with the process before. I made Bobby a snack of BBQ cracklins for dinner that night – which kind of made of for my decision to take Crosley to this jumpy house family fun center place that was full of tons of kids making tons of noise.

One of Bobby’s childhood friends gave him some Jimmy Red heritage corn seeds that are extremely rare. We removed the kernels from the cobs and stored them away in a Mason jar to plant next year.

Those are really all the preps I was able to get to this week, besides some further education about elderberry medicinal uses.

I think my brain is too friend at this point to come up with any good questions to share, but here goes:

1. What seeds are you stockpiling for use in next year’s garden and in a survival stockpile?
2. Are you planting cover crops in your growing plots?
3. If you could teach one self-reliance skill to a child this month, what would it be and why?
4. And of course, how did y’all prep this week?