This has been an exciting week here on the homestead. Bobby sent me a text message saying that he bought two tractors. I thought he was joking and messing with because there was such a delay in my response to his question about whether or not I needed anything from Tractor Supply because he was going by there.

Well, about an hour later, Mickey, an ornery old local mechanic and tow truck business operator, pulled up our hill with two tractors. Some deal a buddy of Bobby’s had come across today somewhere, likely on one of the Facebook trading post pages.

I am in love with the smaller rusty beauty. That one has not been run in a year and needs a bit of work, but nothing major. I like it so much I might actually agree to learning how to drive a tractor. Bobby’s beloved huge old Massey Ferguson is forever going to be a no go, and the little Kubota is tippy, even on what passes for level ground around here.

At the very least, I am going to get a bucolic fall photo of all the grandkids on the rusty beauty while it is parked against our equally beautiful hillside. As of right now, Bobby is contemplating trading the tractor I have become enamored with for a piece of hay baling equipment we are apparently lacking.

On another note, I have been busy making Christmas and birthday presents from natural materials found here on our survival homesteading retreat, and with my embroidery machine.

Here is the Squid No More Dolly; that’s what she has been dubbed. Before she was stuffed Bobby said she looked like a squid, but finally agreed she was cute when I finished making her and her outfit for Ariyah for her first birthday. The onesies the doll is wearing roughly matches a jumper I made for Miss Mini Pretty as part of her gift.

I had never before made a baby doll in the hoop on my embroidery machine or had any clue how to install doll joints. I had really only made simple bendy dolls and flat felt dolls and their clothing – a twist on the old-fashioned paper dolls I loved as a little girl.

The wig I made was not quite adjusted properly in this photo – but it was about 1am and I was too exhausted to finish her until the following morning before the party. The second grandkiddo party I hosted in a single week. It was a fun but tiring week of festivities, to be sure.

I wanted to make a simple Waldorf-style doll before moving up to the far more complicated soft sculpting and needle felting version. It took me an hour to properly stuff this little doll’s head so it looked right and the eyes were even.

To help teach the little ones some homesteading skills, I let Colt and Auddie practice cutting the arms and legs out of the doll skin fabric and threading my embroidery – sewing machine. I also let them put in some of the hand sewn stitches required to add on Squid No More’s extremities.

Now I am working on making a natural play space for the boys to use to play with their little camping and hunting people and critter sets. They are helping to sand the wood, measure and make cutting lines, check to see if the support branches are level, and to be little engineers when figuring out the design for the different weights and diameter of cut log base pieces.

One of the young men in our tribe is honing is power tool skills by getting me all of the pieces I want to create the natural play space. When the wooden “playhouse” is finished, it will look something similar to the one below that is saved to one of my Pinterest boards.

My Buckeye chickens are all now flying…finally! They are odd birds, they really don’t seem much at all interested in flying. One of my ducks has an injured wing.

I tried to get a photo of four of the birds sitting on an old sawhorse I turned into a chicken run perch and swing holder, but as soon as they saw me coming they knew it was time for feed and flew down. Well, it was more like flopped down – they really are odd birds, but I prefer to think of them as unique.

This really is not prepping related, but who can’t use a little barnyard humor in their lives, right? This morning Whiskey, Pearl’s male goat kid, jumped out of the back of the Polaris Ranger when I was doing turn out.

I love Whiskey, (the goat and the Jack Daniel’s version on occasion, too) I am guilty of having a favorite goat kid – I admit it. He is a perfect goat intellectually, physically, and from a healthy perspective. He is quite lovable and will should provide some top quality offspring – that is why I decided not to band him and make him a wether.

Bobby banded Rooster for me, Whiskey and Sunshine’s big brother, and he almost immediately became a major pain in the backside, and appeared to lose both some brain cells and sense of purpose. 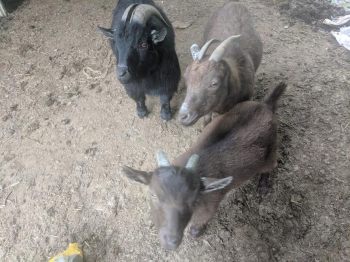 Alright, back to this morning. There were some jalapeno peppers plucked from the garden the night before still in the bed of the Ranger. I did not pick them or leave them there so I left them to try and drive home the fact I am not the wench of Dodrill Hill and everyone really needs to start picking up after their own selves! But, I digress again.

Whiskey was snooping around our snacks in the Ranger and noticed the peppers that I waved him away from, before he jumped. I was distracted for a moment by pony shenanigans and when I turned back around, I thought Whiskey had a pepper stuck to his belly.

I bent over and just grabbed the pepper with one hand to unstick it from my favorite goat’s belly. Well, Pack, it was not a long, thin, red pepper. I had inadvertently grabbed a hold of my favorite goat’s freakishly long maleness.

It was rather unpleasant experience for both of us.

1. What is the weirdest or most hilarious experience you’ve ever had with an animal?
2. If you live (or wish you did) on a survival homestead or prepper retreat large enough to need a tractor, what type would you want and why?
3. Are you making any homemade gifts or giving self-reliance related gifts for Christmas this year?
4. And, last but not least, how did y’all prep this week?