Whenever we worked on preps outside this week, we did so quickly in an effort to stay warm. Winter has already arrived in Appalachia. We had no spring because of the last winter that would never end. Going straight into summer thrilled me, I like it 95 degrees in the shade even when going chores. But, this only a few days of fall nonsense, and then straight into snowflake times just stinks.

We also put the goats to work and made sure the underbrush and hanging branches were cut back to avoid fire threats near the barn. The entire area along “Oh S**t” trail you can see off in the distance in this photo will soon be bush hogged to increase our pasture area.

I was hoping we would get to that this weekend, since a homesteading pal brought back the little bush hog and Bobby now has two smaller tractors, but the ground is so soft and muddy, I am doubting it can be done at the moment. Rain and mud are about all we have had in my region for the bulk of the year – except for some glorious weeks in the summer when we got a brief reprieve.

I know I have mentioned the ongoing pole barn clean out several times, but I think now it is finally almost 100 percent finished for real. The 20-something tribe members are down there finishing it up now. So, without inspecting what I told them to do (complete with physically pointing it out, writing it down and leaving a note with them, AND making then repeating the instructions back to me) I cannot attest to the exact level of completeness at this very moment.

Cleaning out the pole barn where Bobby had stored supplies and materials from the two garage and basement at our old house allowed us to create a complete inventory of the items stored there – and actually unearthed some buried treasure…or at least “junque.”

Come spring, Bobby will be able to build more than half of his reloading shed and new garage (existing attached one becomes a living room with sleeper sofas and built in cabinets for enhanced storage) from materials that were left in the pole barn by the previous owner, the old barn we tore down (awesome locust support beams and posts) because we finally got the pole barn cleaned out (or ‘redded’ out, as we say here in Appalachia) and the contents recorded onto a list.

Tour of the Pole Barn

The Rusty Beauty, which is what I call the 1937 Ford (Bobby and the male tribe members call it ‘The 9 but I have no clue why and haven’t been interested enough to ask) is running as good as she looks. Thanks to the pole barn clean out, all of the tractors and most of the farm implements are under roof for the winter. 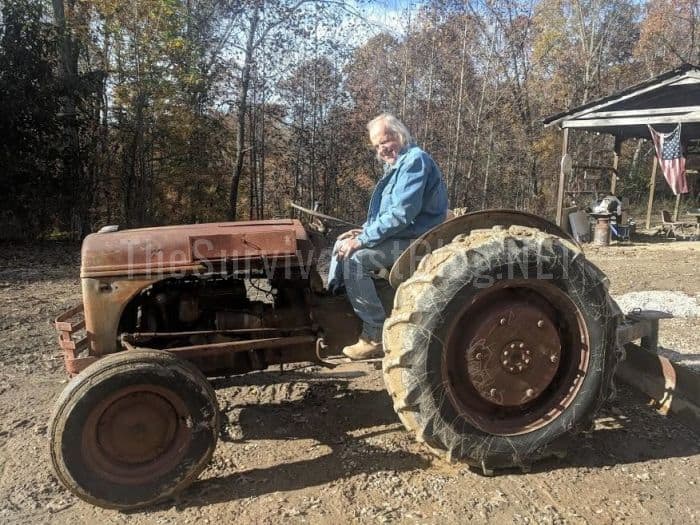 There was a clutch issue earlier today, but that was a quick and simple fix by one of the 20-something tribe members.

A clutch in the tractor Engine

The Rusty Beauty had not been run in at least a year and was really being sold as a parts donor, but she was apparently not ready for the junk heap yet.

up close of a tractor's engine running

Bobby is going to clear coat “The 9” instead of destroying her vintage patina with new paint.

These two new old Ford tractor additions are the only tractors on our survival homesteading retreat that came with both functional breaks and lights. Living so far up on this huge hill, breaks are a super good thing to have. I simply do not agree with Bobby that a bucket on the front of a tractor can suffice. The only downside to the tractors that I can see is that they run on gas and not diesel – and I fully plan on making our own biodiesel during a long-term disaster.

Because we have four functional tractors now, Bobby can leave frequently used attachments on each of them. In the photo below, he is getting ready to spread the last of a gravel pile. Hill maintenance is a constant chore, just like weeding the garden or getting firewood…except hill work isn’t a one or two season chore.

The empty stall we turned into a storage shed now houses the gardening supplies and the hay baler.

We also now have a huge open spot for even more round bales of hay to arrive. The 20-somethings did a great job cutting down the spindly trees, but their previous attempts at cleanup left a lot to be desired. Now though, the entire area is clear and the fencing around it tightened, so hopefully the mini donkeys and the pony cannot poke through along the hillside grade and help themselves to bites from each bale of hay along that side.

On the homesteading front, my weirdo Buckeye chickens are still struggling with the whole flying thing. But at least they are not making as many crash landings coming off of the old sawhorse I turned into a perch and swing.

My goat family is thriving, and pulling their own weight around our survival retreat. Rooster tries my patience and lacks some big brother skills once in a while, but all in all, the growing herd gets along well.

tara's goats have been growing

I did some homesteading crafting to keep up with my homemade Christmas present schedule during the evening hours this past week. In the photos below I am using clearance scrap material I bought for next to nothing to make baby doll clothes and turning an old bathroom cabinet that came with the house into a princess castle.

Because Auddie and Ariyah are both so young, I was able to use more bundles of the small scrap material to make each of them a dress to match a dress for their baby doll.

I get almost all of my sewing patterns on Craftsy. At this point, I probably have a library of a few hundred sewing patterns that I have downloaded and printed of and only had to pay for maybe three of them. Craftsy has literally hundreds and hundreds of free patterns, and even the ones that you can opt to buy, rarely ever cost more than at most, $7 each.

I have been using the same piece of chalk to trace patterns since I taught myself to sew three years ago. I figure it might have another 12 months in it before there is nothing left.

The castle now has pink paint on the inset area on the doors inside and out. I thought the castle would look adorable all pink, but Auddie’s favorite color is purple and it will be her gift. We added another shelf inside to give her three tiers to play on with her Playmobil princess figures and the homemade Waldorf style bendy fairy dolls with wood heads that I also made. The shelves serving as floors are purple with pink little throw rugs made out of felt and the interior back of the cabinet is pink.

We also got out the manual wheat mill and ground some acorns into flour this week.

1. Are you making any homemade Christmas presents
2. If you had to make a Thanksgiving meal without modern conveniences, how would you do it? Fingers crossed for some awesome recipe sharing here too!
3. If you were handed $500 to build or buy a new prep, what would it be?
4. And of course, how did y’all prep this week?