Dan’s Note: sorry everyone, I completely forgot Tara sent this one last week…

Well, it has been another week of dealing with rain and mud here on our survival homestead. The weather for the past year and a half has been unreal. The only good thing to come out of it is the massive learning experience from a gardening and livestock perspective.

We had only two seasons this year, summer and winter – then back again. The impact the long and unseasonably cold and wet winter which stretched dang near up to May, had on starting plants and getting the garden ready.

Thinking we were golden after finally getting plants in the garden and cleaning up the mess from keeping them inside so long was decidedly short-lived. Next came the intense heat and humidity that lasted all summer – with hardly any rain at all.

Usually we get far too many wild blackberries than our tribe could ever pick and preserve. This year I didn’t even get enough to make more than two jars of jam. Our young fruit trees barely made it through the summer season alive. Our apple crop was decidedly low and we didn’t get a single peach this year.

After the long hot summer, we had maybe a week of typical fall temperatures, and then the rains came back heavily – along with winter like temperatures. The ridiculous weather also wreaked havoc on the hay fields. The yields around the region (tri-state area, really) low and many folks only getting two and not three cuts.

We did not get enough hay to put up for the winter because of the rain and had to buy about 10 round bales. The farmer down the road the road we bought from before we had our own second hand baling equipment, didn’t have any left to sell long before the usual hay hunting time of year.

Because of the weather, he was 70 bales short this year, and a man from Kentucky drove all the way up here to buy him out and pre-pay by the end of July. We also tried one of Bobby’s fellow firefighters who bales square to get some more to put up. A man from out of state also bought him out, as well. As bad as the weather was here, it was apparently worse in both Kentucky and West Virginia. It was almost impossible to find enough days in a row when it did not rain to cut and rake the hay to dry it before baling.

We finally found some extra bales but the quality is not something I am happy with and am worrying it was not dried enough and won’t be safe for horse consumption much longer. Because last winter seemed to go on forever, the grass in our pastures came back extremely late, causing us to go through a lot more hay than normal. The year prior, our various herds were out in the pasture feeding themselves by February.

This weird weather pattern caused extra expense, time, and stress – things we can deal with now, but would not be able to during a SHTF long-term disaster.

So, it was a learning year on our survival homesteading retreat. Once we get past Christmas, we will be devoting a lot of energy into putting up a larger greenhouse with a drip water irrigation system, growing more dwarf fruit trees, and maybe even putting in a walipini. Our evolving plans will aim to increase our growing output as much as is feasible regardless of how long winter wants to last or how intense the sun can get in the summer.

Until then, in between finishing homemade Christmas presents – including self-reliance themed ones for non-prepping loved ones, we will be buying more gravel to put on our washing out curby ½ dirt driveway, fixing T-posts that are getting wobbly from all the soft mud that surrounds them, and dragging our roads so it at least remains passable by 4-wheel drive vehicles. 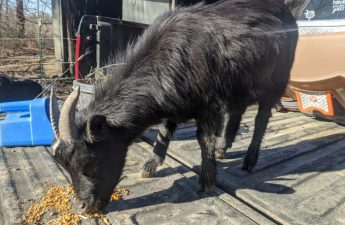