Hello again, all of my new virtual prepping pals! I am so glad everyone is reconnecting and welcoming new members to the online survival community.

This week we made a major prepping purchase – a new to us hay baler. Last year we cut the fields with a bush hog attachment to my husband’s beloved old Massey Ferguson tractor and then went the old-fashioned route and used pitchforks to load it onto the hay wagon after it had been raked.

It was back-breaking work but we got it done and actually, like most work details with our tribe members, was actually a lot of fun…when it was done and we had our feet propped up in the shetler with an adult beverage in hand, of course.

I pulled back onto our survival retreat after taking my mother out for an afternoon or errand running (we spent 2 whole hours in the store from hell A.K.A Walmart) and was overjoyed to see the hay baler sitting in our bottom field. 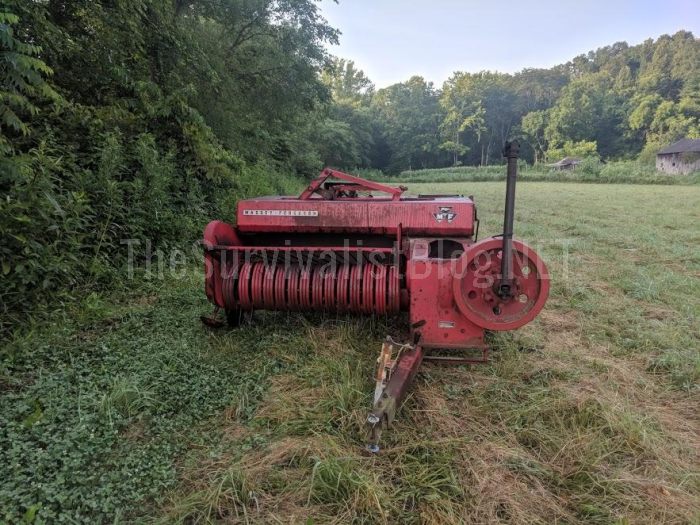 Bobby and a mechanic friend had gone to look at two different square balers and had decided on one and hauled it home. We had debated about the pros and cons of round versus square balers for quite a while.

He prefers round bales because they can be stored outside without getting ruined and can be moved easily with his tractor. But, last winter, the worst we have had in well over a decade, the tractor was down just as much as it was up and running and we had to push the round bales where they needed to go – that was so not fun, especially after they rolled through fresh manure you were forced to lean against to continue pressing your body against while pushing it 20 feet or so.

The first baler Bobby looked at made 75-pound square bales and was a bit higher and in a bit better shape than the one he bought. Our mechanic friend looked over the less expensive one that makes 50-pound bales and figured it to be a fairly easy fix.

That was a relief, I can load and move and feed 50-pound bales without a problem but couldn’t handle doing the same with a 75-pound square bale on my own. Sure, Bobby could do the 75-pounders on his own, but his back wouldn’t like it one bit.

We also did a lot of wild blackberry picking this week. My homemade blackberry jam simply rocks. It was the first jam I learned how to make. Unfortunately, I won’t be making more jam today because Colt and Auddie helped me pick berries and by the time we drove back to the house in the Ranger, they had helped themselves to most of what was in our bucket.

I told the grandkiddos they had just consumed bird poop and goat slobbers since I wasn’t granted the chance to wash the berries first, but their sticky-faced grins indicated they didn’t mind the wild additives the least little bit. The little stinkweeds also just now polished off the last of my blackberry jam that was in the house. I am going to have to go out to our butcher shop and break into the stash.

Did I mention our survival homesteading retreat came with a butcher shop and all the equipment to operate it – the seller even left us scads of meat wrap and some semi-blood stained aprons. We do not operate it commercially, just for tribe use.

My garlic bulbs for planting finally arrived in the mail, so I will be doing some more apothecary patch work this afternoon before Bobby gets home and we get busy with the hay baling again.

Our daughter really wants to become a goat farmer and add to our herd. In theory, I have no problem with this, but she has to be willing to either sell the kids, eat the kids when they mature during a SHTF situation – or both.

The two standard goats just are not good with Pearl’s twins at all, especially not the male. I love the girlie boys, but they are quite the handful. They are great at clearing brush, but want to be lap goats and being wethers will not help Brea start a profitable goat herd for meat, cheese, raw milk, or soap making ingredients.

The girlie boys and Rooster, Pearl’s first kid, are taking some sun outside of our back door. Just like a loyal dog, they follow me around and wait for me to emerge from the house – wreaking havoc in the shelter house while the wait more often than not. They think our “barn” is way cooler than their own and attempt to move in whenever someone leave the garage door open.

Our tribe member Sarah might be interested in taking the girlie boys home with her, and I could probably live with that – except they would no longer be free. They would share a really nice pen with some sheep and get out to exercise daily. I think they could learn to free range at Sarah’s but she has less acreage and neighbors on the lower portion of her hill that have dogs that would attack them, so pen life it would be if I decide to part with them.

If you would like to learn about more about our first foray into goats and Pearl’s miraculous journey to health after her own dog attack, you can read about it here, this is the first article I wrote about the attack but did several follow ups with photos and how we treated Pearl to prevent infection with natural ingredients and Penicillin shots.

Don’t forget to check out the post about the first interactive interview we will be doing here on The Survivalist Blog so you can tap into Grannie Pam Peter’s knowledge about growing, cooking, and preserving food in preparation for a long-term disaster. Just leave you question in the comments section so I can share it with Pam during the interview and she can respond to you.

Our second chat with an expert guest will be Rick Austin, the Survivalist Gardener. Here is a link to an interview I did with Rick on my old radio show.

So, y’all, what did you do to prep this week?