Good morning Pack. It has been a week or so of dealing with flood water – with temperatures ranging from a high of 73 degrees all the way back down to 30 degrees. The ground is simply saturated and still frozen solid more than a few inches down from the surface. Mother Nature has given us a run for our money this year…and it’s only February.

We were flooded several days in a row more than twice twice this month. On a multitude of other days both our road and our creek were either impassible entirely or feasible to drive upon only by those brave at heart and still possessing ample youthful bravado – who also had either a 4-wheel drive or 6-wheel drive vehicle.

The creek is now more than twice as wide as what it was. We are now in the midst of fence mending. Untangling barbed wire wrapped around downed trees after the bank caved in took hours over the course of several days. Doing chores together often serves as date night around here – something I USUALLY enjoy. 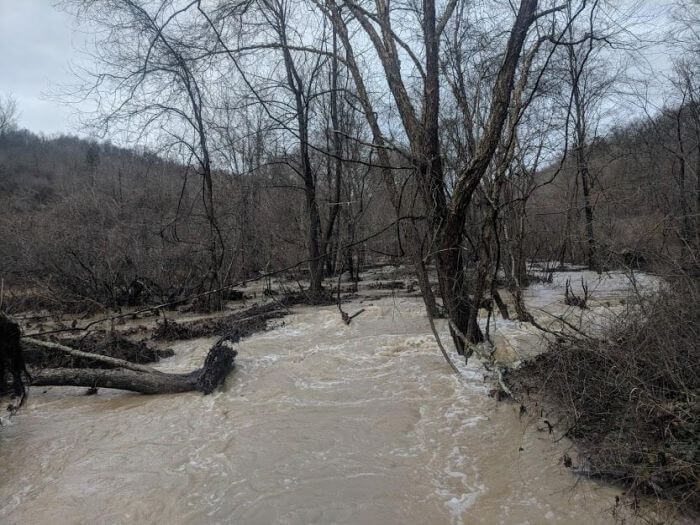 Within the course of just about three hours, the largest storm of 2019 so far, totally changed the landscape of our property. Because the creek is in the bottom portion of the property, near the beginning of our one-fourth of a mile farm road, it is always an adventure driving down bottom to see just how badly our creek misbehaved… this time.

Local and short-term natural disasters should always be in the forefront of your mind, not just the long-term TEOTWAWKI SHTF type of events. Even the most diligent preppers can get a tad unfocused on the mundane seasonal mishaps because we come to expect them to behave exactly as they always. That is so not always the case.

We were prepared for this most recent round of flooding as far as food and immediate needs go. Some tribe members did climb out on a felled tree and we worked some extra comfort provisions across using a rope, cooler, and duct tape. We surely could have done without the extra items, but it was nice to have them – especially the chocolate.

Having the tribe members come over also allowed us to get a report about what our property looked like on the other side of the creek, since we couldn’t see how far the flood water had gotten into the hay fields.

But man, I was not exactly ready for the workload that came next. There is no waiting around for better weather or when you are not so tired when it comes to livestock and fencing. If a horse would have walked to that section of fencing to get a drink or tried to walk through the creek where the grass was literally greener, they would have gotten tangled in the barbed wire – which can kill a panicked horse.

If the horses had gone into that hayfield undetected, they also could have been caught on the wrong side of the creek if the water came up again – which it did about two hours after we finished mending the fence.

The hay field is not fenced in, so if they wanted to go walkabout on the road, which happened once last year due to a young tribe member having no clue how to shut a dang gate, I would not have been able to get them. Our tribe members who brought us morale boosters could have in theory, but getting a horse trailer off their hill and back up it even once, let alone multiple times to transport the entire herd of critters, is not a realistic backup plan.

The water in the creek was moving fast. I doubt our mini donkeys and pony would have made it across safely if they had tried to get back – the horses probably would not have either.

Dealing with the aftermath of the flood and once again working on turning our road into something that actually resembled a road, mostly rounded out or preps for the week. We also dealt with a sick Cowgirl and her puppies. She went off alone in the woods three times, we found her twice and brought her back to her bed in the garage, but the third time we felt that she had passed away.

She was drinking but not eating for nearly two days. Yet, she showed back up the following morning. Cowgirl is our daughter’s dog and lives next door in her cabin, but we have kept her and the puppies in our warm garage for a few weeks since Brea is space limited and eight puppies, even in a cage most of the day, can make a lot of mess.

Cowgirl had worms and we were flooded in with no extra worm medicines. I am not a fan of commercially manufactured animal medications anymore than I am most human medicines. I prefer to preventatively treat potential health issues naturally. Bobby buys manufactured worm and flea medicine for his dog, but I treat mine naturally. Jovie and Ruger just turned three on Valentine’s Day and she has been healthy and worm free, while Ruger has bouts with lethargy and stomach aches.

Bobby shakes his head a lot at my natural remedies, but has had to growing admit they work – without harmful side effects. You know, all those things the announcer guy in medicine commercials ticks off faster than an auctioneer at the end of the commercial?

We gave Cowgirl and her pups garlic and apple cider vinegar in their water. Dogs so do not like the smell or taste of garlic, but we managed to get it down them. By morning, all of the dogs had expelled the largest round worms I had ever seen and were eating heartily again and wagging their tails. The apple cider vinegar makes the environment inside the body too alkaline for the worms to survive. Garlic is a natural anti-toxin.

1. If flooding is a possible problem in your area, how are you prepping for it or dealing with such a natural disaster?
2. What morale booster items do you stockpile or would miss most if you did not have them even in the short term?
3. What home remedies do you use to treat your domestic pets and/or livestock?
4. How did you prep this week?