It has been a very sad week on our survival homesteading retreat. We suddenly, and without warning, tragically lost a member of our tribe – a man everyone would probably agree was the most valuable member.

My husband’s childhood buddy Mark, although everyone called him Matty (and I never really grasped why) or Mad Dog, collapsed at the local pharmacy a few moments after dropping Bobby off at the tire shop.

He was doctoring for a few things, none of which were the cause of his death. Matty seemed indestructible, we are all still in complete shock. Even though his funeral was held yesterday, and we all saw him with a well manicured beard for the very first time, it still doesn’t seem real.

You simply cannot look around a spot on our 56-acre retreat an not see a spot that Matty had not tended to, something he built, dug, repaired, or butted heads with me over at one point or another.

Bobby usually got a kick out of watching two extremely hard-headed, outspoken, and blunt people saying their piece when Matty and I didn’t see things the same way – fortunately for my Bobby, we agreed on most things,

Matty taught us all a whole lot. Even though he could be a gruff mountain man sort, his heart was as large as the great outdoors that he loved so much. He could track, hunt, butcher, garden, can, drive heavy equipment, and identify anything he came across in the woods.

He has been training our son-in-law how to smoke meat and make jerky and a tribe member’s teenage son how to butcher. Both were inspired by their teacher and what they learned, and have stated they are going to step up and make sure they keep learning and increase their skill-sets.

We had tragedy strike in the barnyard as well. We lost one duck and another is seriously injured and still hanging on. Something, and I am thinking it was a coon (could sure use Matty’s help figuring it out) got into Pearl’s nursing stall, where the ducks decided they wanted to spend the night for the first time in more than a month, and killed my breeder drake.

The female Pekin duck had about half of her feathers pulled off of her back and has injured a foot or leg – or both. I am glad her leg and foot are not broken. There are no signs of distortion, but she can’t really put any weight on it right now – or won’t because it hurts.

If her leg is not broken and since she survived the first night and did not get shock, she has a chance. I believe I can prevent infection from setting in using medicinal remedies, but can’t fix a broken leg. She doesn’t seem to be in enough pain to have something broken, just hurting and still upset over her ordeal.

Bobby said if the predator had not gotten the ducks it would have likely killed Pearl’s kids, and I am sure that he was right. It had had to be a predator that could climb fairly high to get into the nursing stall.

Pearl and her kids are temporarily living in the chicken run, the dog box she lived in before she lived here is inside the run, so that made her feel comfortable after the sudden change of location. The Pekin is inside the brooder and is alone, but can see Pearl and the kids a few feet away and the other members of the barnyard, so at least she hasn’t been completely removed from her familiar surroundings. The duck does not seem to be eating much, but is drinking well – time will tell, I guess. 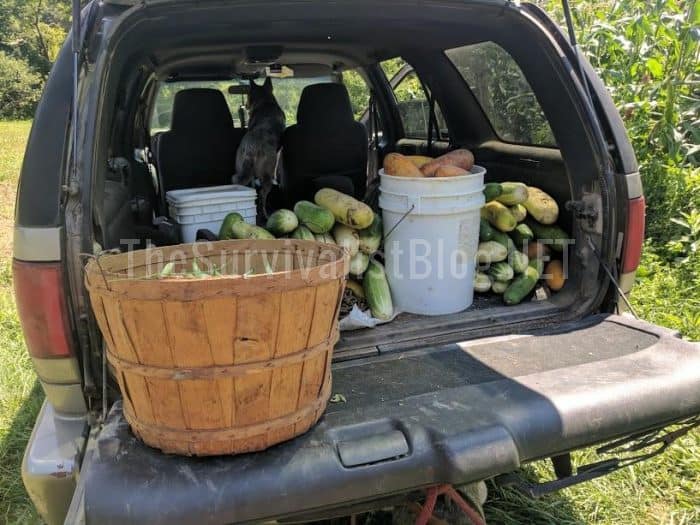 The garden is starting to produce, but not as good as last year. Bobby and Matty both spent several weeks being down sick with some virus that was going around, and that was when the Japanese beetles I have been battling decided to hit.

The stinkweeds are surely enjoying all of the berries I do get picked. This is their “who me?” look after turning around and asking if they had been eating the berries…again.

Our wild blackberries are not producing as well this year either. So many of them just got fried in this heat, we are going to have to go deeper into our woods to find enough to make my delicious jelly this year.

The only other prepping we were able to get accomplished this week was making some more colloidal silver. We have been taking it when we get sick, and Bobby small doses daily, for several years now and make our own.

This recent bout with a virus aside, Bobby has not gotten sick in all that time and used to get a bad cold at least twice each winter and usually once in the summer.

I hope y’all had a better we than we did here on Serendipity Acres. How did you prep this week?