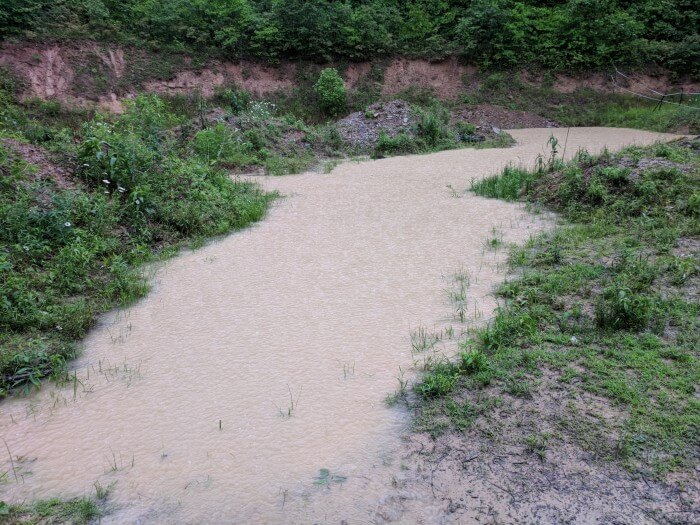 Hey Pack. This week’s preps involved a massive learning lesson. We. Are. Not. Flood. Ready. Living on top of a huge hill – I mean a hill so tall you could hit a helicopter with a handgun if it was attacking kinda tall, you would not think flooding would be an issue. But it sure was today, fellow preppers.

We have dealt with being flooded many, many times in the past. We are prepped to be “stuck” on our hill for months – or years if need be. In that regard, we are prepared for flooding. A flash flood warning always just alerted us to the fact that we were not going to be getting out that day…or perhaps the next. Until now.

I will begin at the beginning. That is always a great place to start.

Our survival homestead is a 4-tiered property. The low area at the bottom is about 7 acres and includes a traditional garden and hayfield.. You have to cross a creek, and come up a winding dirt and gravel road to reach the second tier, which has pasture on either side.

Up the hill to the third tier are our house, pond, a ravine with a natural spring, and barn. The fourth tier is the upper hayfield. Each tier takes you up higher, but all of it is surrounded by tall hills on three sides. The driveway is half a mile long. You can see photos and a short video tour of our prepper retreat on Survival Sullivan.

On my way out to the barn to do turnout and pack down two bags of feed, I discovered a flat tire on the Polaris Ranger. Not wanting to pack the feed on my shoulders for nearly a quarter mile down to the barn, I loaded it up into the truck. I both smelled and felt like rain, but the sky did not look like a storm was brewing.

Well folks, I waited about 10 minutes too long to head down to do turn out. Before I made it the short distance to the new chicken coop, the skies opened up with a blowing downpour of epic proportions, followed just a few seconds later by thunder, lightening, and dime-sized hail.

My ducks refused to go back into their coop after spotting me, knowing that feed was on its way. How they withstood getting pinged hard by all that hail I have absolutely no idea. I sat in the truck until it stopped – about 15 minutes later.

When the storm slacked off to a medium rain, I opened the truck door to jump down, and the small puddle I had parked over suddenly came up to the top of my muck boots.

After getting the flock taken care of, I kicked my Dodge truck into 4-wheel drive, and went the rest of the way to the barn. Wow, it was like Niagra Falls coming off two adjacent parts of the hillside.

I was literally worried about my Jovie getting swept away down into the steep ravine beside the barn when she walked over to investigate the noise and water. The noise of rapidly pouring water was so very loud.

During a bad storm water runs off our hill in various places, but never with the power it exhibited today. By the time I got back to the house, I had been gone for about 25 minutes, a half an hour at the most.

I parked in front, and walked in through the garage because the ground by the back door where I usually park is still soft after the septic tank and leach bed repair project. At this point, the still hardening ground was a massive sinkhole.

As I got about halfway through the garage, I was met with water coming from the inside of the house. My first thought was “great, the septic backed up or the commode chain fix came undone again for the first time in a long time.” I didn’t get that lucky.

The water was flowing from the back door all through the living room, kitchen, and bathroom. I called my Bobby immediately. He sounded so chipper when he answered, I hated to deliver bad news. I asked him how far away he was from home. He was at least 30 minutes away, but he was rushing home as fast as he could to help.

He ran into flash flood water on the road in several spots, but got through. At least until he pulled onto our driveway. The creek was higher than it had ever been, and was running so hard that the large debris was swirling like a twig in a hurricane under the current. There was no way my Bobby was going to get across it to come home and help.

Hiking into our property through the woods can be done, but it’s nearly a two hour hike when you are not dealing with inclement weather. There was no sense in trying the hike when it was a mess we were dealing with and not a medical emergency. Bobby had trained me well, I knew a trench had to be dug to diver the water.

I did not get the chance to take any pics of the initial 2 inches of water throughout the kitchen, living room, and bathroom area. It was still pouring in through the back door. But here are a couple from the middle of the clean up. I think our daughter’s husband had to dump the large shop vac 26 times before all of the water was finally gone.

This is a photo of the kitchen area about half way through sucking up the water:

Here is what the living room looked like in the middle of clean up after moving furniture out of the bulk of the water:

While Justin was running the shop vac, I was out back digging a trench to divert the water from the back door. He offered several times to do the shoveling, but I already looked like I had gone swimming in the cute sundress I had on, basically resembled a drowned rate – and I hate doing shop vac work.

Run off from the hill behind our house has caused water to pool some around the back door, but only slightly and a couple times in the years we have lived here. This time, the runoff was coming from three different directions into the low lying area in the back of the house.

We have livestock feed bags saved to fill with dirt or sand, but didn’t have any ready to go – and at the moment, no dry dirt to put in them. Those bags were kept handy more to block out road before the narrow creek crossing and for other OPSEC uses than flood bags. But, they will soon be filled just in case the runoff starts to give us a big problem ever again.

Several logs had rolled into the ditch that runs behind the house and they were causing a problem with drainage from the trench I had dug, so Brea and I got those muscled out.

Now, all I am left with are muddy floors to mop – it sure would have been nice if the flooding had happened yesterday morning BEFORE the house was cleaned. But, the odd turn of the weather and the diversion from the normal pattern the hill runof took, alerted us to holes in our prepping plan.

Short-term disasters sure do turn into great survival plan test runs. While I never want more than the narrow rock culvert that runs across our creek to serve as a vehicle “bridge” the wooden foot bridge wide enough to get a horse or our Ranger through, it just went to the tip top of our to do list!