It is harvest time here on our survival homesteading retreat. We picked and then began processing, about 620 ears of corn on Monday. I was so tired I lost count, even though I was tasked with keeping it.

We ended up giving a good bit of corn away to tribe members and then cheated a little bit – at my sleepy eyed insistence and froze some whole ears. They will still taste great, the only side to that method is the amount of space whole ears take up in the freezer, but thanks to the on-site butcher shop, space is not really an issue.

Our corn did a lot better than last year, thanks to my companion planting and natural DIY earworm protection methods – at least in my humble opinion. But, the Japanese beetles and this wildly unpredictable weather with intense humidity followed by torrential rains, wreaked havoc on our green beans and cucumbers.

Keeping in step with the training them up as you want them to go mantra, Colt and Auddie got dirty and sweating with the grown-ups during the weekend harvesting. Colt helped to plant and raise the corn and I thought it would be highly valuable for him to be a part of the picking and preserving process as well.

Auddie was the potato picker helper. “There’s one!” she would yell with great excitement each and every single time she saw a potato…I think she thought it was an Easter egg hunt! She called the tiny potatoes that will be used for seed next year, “babies” and the bigger potatoes “momma ‘taters” it was beyond adorable.

She and her Papaw would sing, “Pickin’ up ‘taters and puttin’ them in the basket” during the great potato hunt of 2018. I was not in a singing mood. I had been standing on this hook-like tractor attachment thing that was not working properly to dig down into the dirt enough to scoop the potatoes out of the ground.

No clue what this little attachment is called. But I can say with absolute clarity that it is extremely difficult to stand on it with both feet while it is digging and sometimes hits a rocky area hard and bounces you nearly into the air and then suddenly goes down super deep in the ground and almost getting stuck.

I stood on the moving farm implement while holding onto the roll bar on Matty’s tractor. Bobby recently bought Matty’s tractor, I’m sure it remaining “on the hill” makes him happy. After nearly falling through the metal bars that surrounded the digging implement from hell a few times, Bobby decided it was time I learn how to drive the little diesel tractor.

I am short, so reaching and holding onto the roll bar was a tad bit interesting. Guess I at least got a decent workout during my ride along. We have an old-fashioned push potato digger farm implement – yep, not sure what that is called either, but perhaps I will do better using it!

After killing the tractor a few times, back up on the digging hook thingy I went. In the end, we got the potatoes dug, no injuries occurred, and the problem, whatever it was, is not fixed.

My tomatoes did superbly though. I am so proud of my Thomas Jefferson tomatoes, hopefully my favorite president would be too! They produced far more than 50 pounds per plant! Bobby loves using cages and I prefer staking – but we had to do a little bit of both to keep the Thomas Jefferson plants from folding over onto the ground.

These are average Thomas Jefferson tomatoes. I placed my laptop mouse next to them so you could get a better idea of their true dimensions. They are simply delicious, and not just because they are the great, great, great “grandseeds” of seeds planted by a Founding Father. They are probably the juiciest and easiest to raise tomatoes I have ever come across.

I ordered the seeds from the Monticello gift shop (very nominally priced) and started them indoors late – too late according to my beloved Bobby….and yes, I loved proving him wrong.

My other preps this week included more sorting of Bobby’s junk pile for possible usable materials (his sheet metal collection is now fairly enormous) and working with Jovie and the horses. She wants to herd and when I would prefer she did not, which prompts the herd to run every time they see her walking in their direction – except for one stubborn mare. Well, when they horses run, Jovie gives chase and complete chaos results for a few brief but intense seconds until the barnyard queen (that would be yours truly) commands calm. 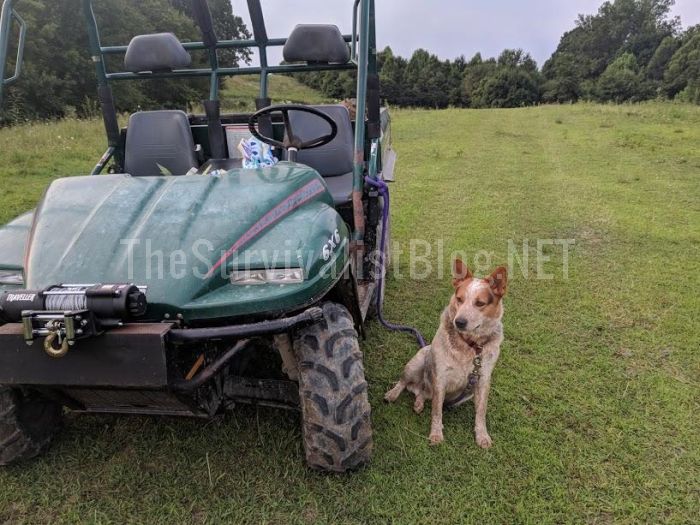 It took a few weeks of practice, but the horses now understand that when I part the Ranger or the 4-wheeler I will tie the spunky beast to it while I do what I need to do with them or in their vicinity. The herd also can now grasp that part of the routine will be letting Jovie loose – in an ultra calm state, to walk about kinda near them before I turn the key in the ignition.

I need for the herd of horses and other livestock, though Jovie really only chases the horses, to understand that if Jovie is herding them to the barn or anywhere else it is for their safety and they must comply quickly. Having a pair of quality herd dogs as well as a pair of top-notch livestock guardian dogs is useful now and can mean the difference between life and death, during a long-term doomsday disaster.

I am still a novice at canning on anything other than a traditional oven. One of my prepping goals this summer was to learn how to can over an open flame, on the wood burner, and on the most exciting addition to any homestead – a wood cook stove. 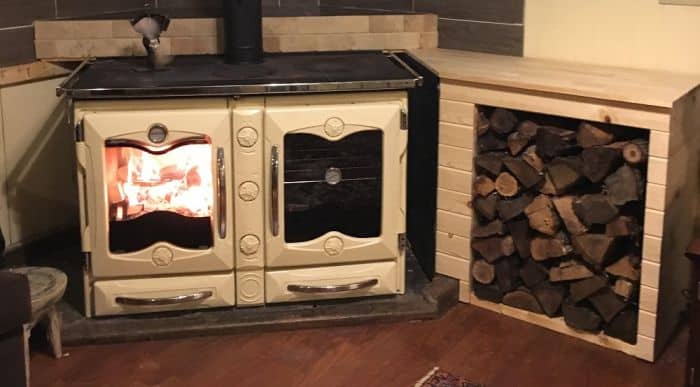 I think wood cook stoves are a perfect combination of functionality, and efficiency. With one of these beauties you get the benefits of both a wood burner and a stove/oven combo. Relying on the power grid, or even a fireplace, to keep you warm and allow you to cook and purify water is a recipe for well..disaster, during a long-term disaster. Photo courtesy of WoodCookStove.com

It was my prepping pal, Melissa Norris, who first made using a wood cook stove seem like a not just a feasible, but reliable idea to me. It takes practice, but the learning time is well worth the effort. The key to cooking anything, let alone canning, on a wood cook stove is to start with an established fire. The stove’s surace must have a steady heat going in order to boil water or to prepared something thick, like meat.

For the past three years I have used cast iron cookware exclusively, even with my traditional stove and oven. You definitely need to use cast iron on a wood cook stove, it retains heat incredibly well and is ultra durable. You can’t ruin cast iron no matter how hard your try – you only have to use baking soda or cornstarch to remove light rust or sand away heavy rust, and reseason to prepare poorly maintained cast iron (or cast iron used to can with a recipe that contains vinegar) to be ready to hit the stove again.

If you have an established fire going, it really won’t take any longer to fry meat or boil water on a wood cook stove than a regular stove. But, it will take a lot longer to fully cook a meal, much like when you use a crock pot.
The only other prepping we did this week, besides a little shooting practice, involved dealing with Pearls’ high-energy kids.

animals free ranging on the homestead

They are putting on weight far more slowly that Rooster, Pearl’s first kid, did. I am going to add some molasses and coconut oil to their diet – they are eating a little bit of grain and hay, to see if that will help. Until they get past hawk bait weight, they cannot free range with the rest of the goat herd.

This week’s questions to the Pack:

1. How did your garden grow?
2. Do you prep alone, with extended family, or a tribe – and why?
3. Do you set weekly, monthly, or seasonal prepping goals…and regularly achieve them?