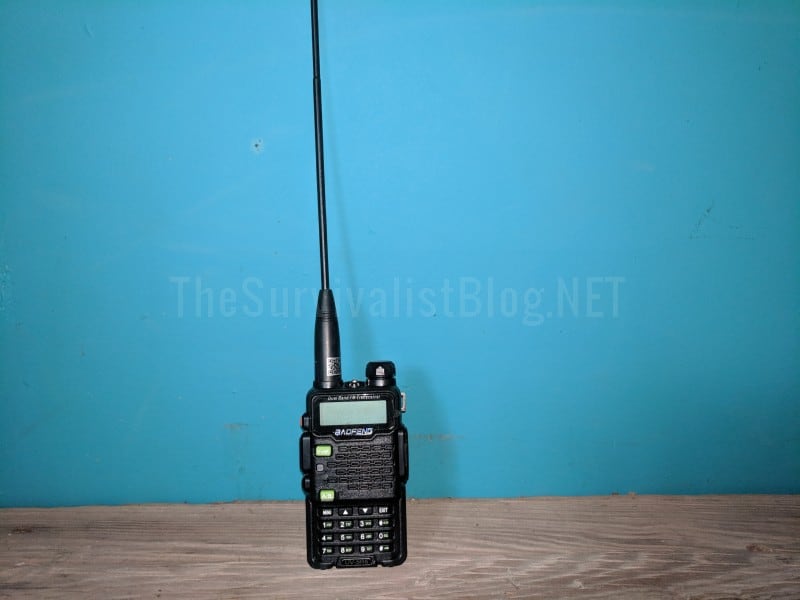 Hello Pack! Happy New Year and new decade! I hope you are all keeping warm and spending plenty of time working on perfecting your survival plan and preps. Because winter is such a long semi-down time on the survival homestead, we call this our “planning season” and have so much fun planning for the spring and summer … before all the hard yet fun outdoor work begins anew.

I am about to start taking HAM radio classes. My Bobby got me a HAM radio for Christmas, and I am excited to learn how to use and and connect with others. My beloved purchased an antenna called a “whip antenna” that is super durable and extremely tall to help ensure better reception on and around our wooded homestead.

I am sure there are copious amounts of preppers out there on the radio waves. Of course, when the SHTF possessing a license will not be a priority, but as of now, it is.

Bobby got me a HAM radio that is compatible with all the other Baofeng radios our tribe already uses. We are constantly on the lookout for bargains to add to our radio stash, and the online auction I mentioned previously has been an awesome find for doing just that.

The radios are hardy, but we use them daily around our 56-acre survival homestead because cell service is non-existent in most spots – which suits me just fine. We keep several boxes of new radios properly houses inside of a Faraday cage at all times, along with space parts to do repairs.

In other exciting news, Bobby is now officially semi-retired and will be working from home instead of his office in town – which we sold along with our last rental house. Y’all can’t see it through the computer, but I am doing cartwheels over both exciting pieces of news.

I have long looked forward to Bobby working from a home office, and being able to spend more time on our survival retreat. He will still be on the road in the tri-county area doing real estate appraisals, but only a few days a week now, and no more Saturday inspections or reports writing!

He will still need to run to town for coffee with his dad each morning, that is too valuable of a daily meeting to skip, but other than that he can finally enjoy as much tractor and gardening time as his lower back can stand.

The trip to town is roughly six minutes, so he won’t be gone long or can easily walk home or wait for me to arrive on horseback with his horse in tow, if the SHTF while he is gone.

The male baby kid we kept from Pearl’s last kidding in shaping up to be a fine goat. I think he is going to have the best of both is parent’s character and physical traits and should be a breeder of champion goats once he matures.

Hooper – named so after Burt Reynold’s character in that fun old movie because his antics cause us to think of his as a “stunt goat” will likely become a breeder division 4-H project for a tribe member’s child.

If you have children or grandchildren in your prepping tribe, 4-H is absolutely a great way to teach them homesteading, survival, and self-reliance skills – I simply cannot recommend in becoming involved with the organization too highly.

In other preps this week, we are still working on our annual end of the year – beginning of the year complete inventories of all our survival homesteading preps both large and small, livestock worming, and prepping projects for the year planning.

I am keenly focused on the spring garden at the moment and have already added to our indoor growing and seed starting operation now that the Christmas tree is down and I can set up another table and more grow lights.

As you probably know, The Ohio Prepper passed away on New Year’s Eve… One of the most treasured member of the Pack, someone who’s always had useful insights about all aspects of prepping and politics – a beacon not just of knowledge but of experience.

I thought it’d be a nice gesture to copy-paste his last reply on this website from a couple of days before the event:

i heard about a couple shootings on public radio this morning, the first was about a church in texas where a man in a trench coat pulled out a rifle and started shooting, only to be quickly shot down by volunteer security

Public radio? I’m surprised they even covered such an event.
Actually the guy who started it was using a shotgun and did get off shots killing 2 parishioners at the West Freeway Church of Christ in White Settlement, TX near Fort Worth.
Texas legislators passed the law allowing concealed carry in churches after 26 people were killed in an attack at First Baptist Church in Sutherland Springs outside San Antonio about 2 years ago. Joe Biden criticized Texas politicians when that law was passed, which IMHO makes him not only corrupt, senile and stupid; but, dangerous.
Ohio already has provisions for carrying in churches, with permission of the management.
The attack on the kosher grocery in NYC was only one incident, with the most recent a machete attack on a group at the home of a Rabbi. People at that gathering tried to fend off the attacker with chairs and other items, since NYC only allows police and the politically connected to have firearms, making the city quite safe, at least for criminals.
I have been very heartened to see interviews with law enforcement from all stripes and regions discussing the Texas shooting & response, repeat something many of us have often said: ”It takes a good guy with a gun to stop a bad guy with a gun.”
Another of my favorites concerns self defense vs. calling 911 and hoping for help.
”If you call 911, remember. When seconds count, help is only minutes away.”

Rest in peace, TOP… everyone will miss you 🙁