This has been an exciting week on our survival homesteading retreat. At first, it looked like Murphy’s Law was going to stick around, but thankfully it did not.

At the beginning of the week, Harley suddenly began suffering from the same right leg – shoulder trouble as Ruby. It is just so strange. I doctored Harley, also a high-strung mare, the same way that I did with Ruby. It is taking Harley longer to heal than Ruby. He refused to even leave the barn for days, but is finally on the mend.

Neither is lame, sick, or have a food consumption related issue. Either it was complete coincidence (and I rarely believe in those) or they both found a rut or hole in the herd’s typical roaming paths around our survival homestead. I have searched and found nothing but the out of the usual, but we have 56 acres, so I will likely never find the hole or rut that gave them trouble unless I trip over it myself.

Harley is the white horse in the photo. We are in the process of teaching all of our horses, ponies, and miniature donkeys to cart. During (and after) a long-term disaster I fully believe horses will once again emerge as a primary mode of transportation.

We had planned to do a girls only trail ride this weekend while the men tended to the smoker after a work detail, but with Ruby and Harley not being ready to ride, I doubt that will happen. Maybe we will do a girls only hike or ATV ride instead. Bonding time is very important for tribes. I am just really looking forward to a ladies only multi-generational outing of some sort.

Something really great happened this week. I finally got Buckeye chickens! I have been looking for some for two years. I could have ordered some from California, Texas, and a few other states, but I wanted Buckeye chickens that were actually from Ohio.

They are the only breed of chickens in the entire history of America that were created by a woman. Nettie Metcalf developed them in1896 less than 50 miles from where I live. She wanted birds that were dual purpose (both meat and eggs) and hardy enough to easily withstand an Ohio winter.

Buckeye chickens area heritage breed. It makes me proud to play a small part in bringing them back. In 2003, there were only 27 known breeding birds in the United States, now there are 2,700.

This breed was once an extremely popular backyard chicken, but as small farms began to disappear and small town folks nearly stopped keeping chickens in their backyards, the populations dwindled to near extinction levels. Buckeye chickens are not suited at all for factory farm environments. They are country chickens and are both astute and active free range birds. Living an indoor life at commercial farms is largely blamed for their near demise.

Buckeye roosters weigh about nine pounds when mature and developed hens can weigh nearly seven pounds. They lay about 150 to 200 medium brown eggs annually. The birds have a very small pea comb, which may very well be why they are so winter hardy.

This chicken breed is so great at killing mice, it has often been compared to cats in that regard. Roosters are decidedly docile. Neither hens nor roosters seem to possess the tendency to pick each-other’s feathers. Roosters make their own unique brand of sounds, far more so than males of other poultry breeds, Their most dominant noise mimics a dinosaur roar. Our younger grandson is going to love that, he has been enamored with dinosaurs since he was about four months old.

Chefs are one of the biggest fans of Buckeye chickens. Their meat is supposed to be incredibly tender an is best cooked low and slow in a smoker or crock pot.

The chicks came from Meyer Hatchery and all arrived healthy and alive. I was very nervous about their arrival because the renowned hatchery ships via the United States Post Office and not FedEx or UPS. The Post Office tracking was way off. They arrived a day before predicted only a few minutes before the office closed, so they had to spend an extra night in the box without food or water.

Being a small town post office, they brought the chicks to the address marked on the label only a few blocks away, but that is Bobby’s office and he was already home. I knew Meyer would replace and chicks that died within 48 hours of arrival, but I still did not want to see any of these rare chicks die.

Two of our grandchildren ran over to our house in their pajamas to see what surprise I had just carried inside in a box. Before they can walk we teach all of the children in our tribe about animal care and safe handling. Colt and Auddie are now pros at egg collection, turning on the barn spigot to fill waters, and packing the scoop from the feed tubs to the feeders.

I also discovered an incredible herbalist while researching the Buckeye chicken breed before their arrival. I am still astonished I knew nothing about her until now. She is to natural medicine what Bill Forstchen is to prepping. Some of you (most likely Livin’ The Dream, since she is our online community resident herbalist, if I am recalling the name on so many wonderful posts correctly) may already be well-acquainted with Juliette de Bairacli Levy, the “gypsy herbalist’s” work.

After reading a natural chicken remedy in one of my research articles I learned about the “grandmother of herbs.” She was born into a wealthy family in England in 1912, growing up with maids and a governess. She loved nature and especially dogs, as a little girl. When her grandfather would visit from Turkey every year, he would bring her sisters gold bangle bracelets but brought her a puppy (that never seemed to live very long).

Juliette became determined to become a veterinarian – not an easy task for a woman of that era. Modern medicine, vaccines in particular, began replacing traditional natural treatments during the 1930s when she was in vet school. After two years of classes, she abruptly left the university to not just learn, but preserve the natural old-fashioned herbal remedies still used successfully by gypsies, peasants, and farmers around the world.

Juliette de Bairacli Levy learned about the benefits of herbs, roots, fasting, and a natural diet during her journeys around the globe – and far more about the human condition, in the process. She is credited with saving hundreds of dogs during a distemper outbreak in London ,as well as saving hundreds of thousands of sheep stricken with deadly black scour several years later.

She bucked not only gender stereotypes of the era, but conventional medicine in an inspiring way. I couldn’t wait to see the search results when looking for her books online. I ordered both The Complete Herbal Book for Farm and Stable and Common Herbs for Natural Health (Herbals of Our Foremothers) and fought the urge to pay for overnight shipping instead of using the 2-day prime option. Once that package arrives I will be digging into the books and the our soil to cultivate any herbs, flowers, etc. that Juliette of the herbs, recommends.

Our other preps for the week included ordering another dehydrator, some 3-tiered multiple pot growing containers so I could grow more herbs inside during the fall (I am so glad I made that purchase in triplicate now that my new books are on the way) sorting through Bobby’s metal, PVC pipe, sheet metal, and scrap wood piles to organize and inventory them, and yet more putting up of logs for the winter.

Oh, I did take three of our grandchildren on a bear hunt. Ok, not a real bear hunt, but a self-reliance skill activity anyway. We rode the Polaris Ranger out the back end of Mad Dog drop and then I announced we were going on a bear hunt. I wanted to teach them the importance of staying quiet in the woods when tracking (or being tracked) and watching not only where you are walking but the sides of the trail where evidence of what you are tracking, could exist.

Thanks to a recent rain, the ground was soft enough to see deer and dog prints, so we worked together to determine what made the prints, noting it was not a bear. The children were in charge of leading the way to the rock formation and back to the Ranger on our bear hunt to help them learn the trails and to pay attention to their surroundings. It was both a memory making and learning experience that went very well. 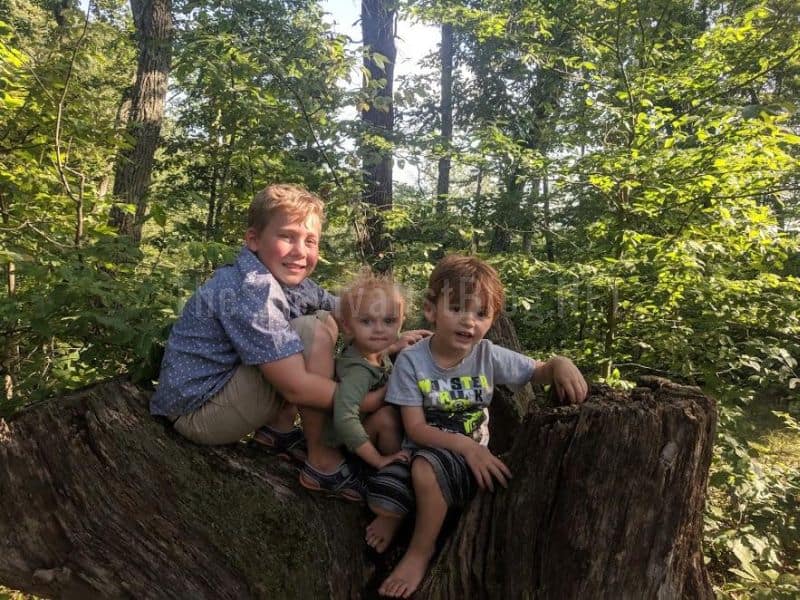 Crosley, Auddie, and Colt relaxing on “the stump” at the end of our bear hunt. Please, no one tell my mother I let Colt and Auddie hike barefoot in the wood… again!

On a non-prepping note, a really cool article I wrote for publication on the New Life on the Homestead blog should be published soon. The focus was on using the entire corn plant. It details how to make cornsilk tea and why you should and shows how to make not just corn husk dolls, but a whole rustic scene out of them and other natural materials I found around our survival homesteading retreat. I made the scene for my mother-in-law’s 86th birthday celebration this week, along with a grapevine, wild flower, and corn husk wreath which also makes an appearance in the same article.

Lots of time goes into making homemade gifts and I enjoy using the homemade gifts to push frugality, natural living, and prepping concepts onto my loved ones. I never want to let a possible teachable moment to pass by without taking advantage of it!

1. What breed of chickens are you raising (would like to raise) and why?
2. Do you stockpile and inventory raw materials or “junk” for SHTF use and how do you plant to use it?
3. Have a natural remedy that has worked well for your animals or the humans you love? Please share it so we all can add it to our medical preps.