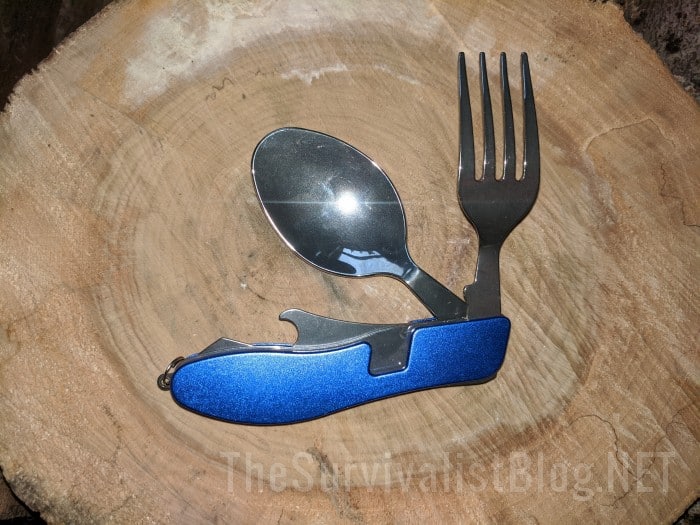 Hello Pack, I hope you are not dealing with the same amount of rain and mud that we still are around here. The constant rain and mud have truly curtailed some of our outdoors prepping plans. So it goes in Ohio in January.

The grandkiddos really love helping find the proper trees and setting up the taps – which I consider great self-reliance training.

Shown in the feature photo is one of the many bargain preps I own on that online auction I keep urging y’all to check out. The Swiss army knife style cutlery set is very durable and includes a fork, spoon, and bottle opener.

I won a dozen of them for $.05 each. The little set they came in also included a small emergency blanket. I consider them quite the bargain. This week I also won a mikhouse heat and more toys to put back for birthdays and Christmas.

I paid half price for a big Lego set but all the rest of my finds were 75 to 90 percent off list. I still think of these purchases as a prep because getting the quality toys for such a bargain price I will spend far less on special occasions gifts and can funnel the money I would have spent back into our survival homestead.

My indoor garden is thriving, except for some pear seeds we planted that a fellow survival homestead gave to us. They developed damping off disease and got really tall and spindly, so I am in the midst of attempting to remedy that issue now, and save as many as I can.

Our young goji bushes are coming along fine, and should be a nice robust size by the time we need to harden them off to relocate outside. I am still not having much luck with dwarf moringa trees.

I have done a good bit of research to troubleshoot the dying off that happens and apparently that is common and these little versions of the “tree of life” are hard to get started.

Moringa trees in general are very sensitive to fluctuations in temperature, and have ultra specific humidity requirements. I may start some outside this summer or late spring and see if that helps, instead of starting them indoors during the winter months.

The walnut and pecan trees we started indoors during the early fall are also coming along – well all except the ones that one of our dogs dumped over – and cause a significant amount of cursing.

My Jovie is finally “with puppy.” She and her nephew, Henry, mated over the weekend. She was not initially pleased … at all. They quickly became dog knotted and Jovie kept trying to kill Henry the entire time.

I had to hold my spunky beast to keep her head away from Henry while they were stuck together and Bobby had to keep a hold of Henry (who is not nearly as large or strong as Jovie) to protect him from her wrath, and being drug across the floor as she tried to get free of him.

It felt like they were going to be stuck together forever. It was quite a workout trying to prevent Jovie from slaying poor Henry.

I am going to keep one of the Blue Heeler and Australian Heeler mix puppies and sell the rest as part of our farm business as we have in the past with Ruger’s pups – Jovie’s brother and Henry’s daddy.

Ruger keeps trying to mate with his sister but she violently warns him that attempting to mount her will be a very bad proposition for her. After she finishes nursing her puppies I am going to get her fixed. I never ever want to go through another season in heat with her again.

A friend that owns a local gun range who spearheaded the Second Amendment Sanctuary measure, our county’s board of commissioner’s just passed, is going to host a gun safety and archery training for homeschooled children in our tri-county region for me in a few weeks.

The kids and the moms and grandma’s who will be taking them are equally excited. I love being able to either teach or organize self-reliance prepping training for the youth in our community and not just our survival tribe.

Many of the kids age 10 and up are already squirrel and deer hunters so they will be participating in a more advanced gun safety and shooting course during the event.

Leave a Reply to Almost There Cancel reply