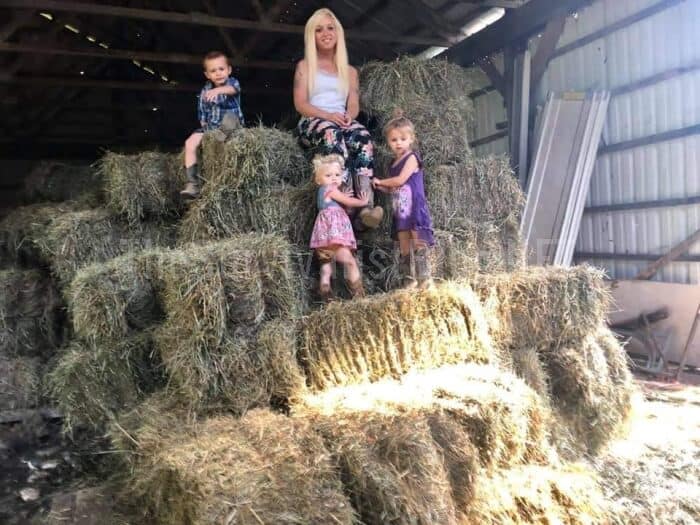 Hello Pack. We have been soaking up a lot of sunshine this week, since the rain that felt like it was never going to end after months of living on a mud farm.

For most of the week here, it has been sunny and 81 or hotter. If the forecast for next week is accurate, we will be spending the bulk of our waking hours baling and putting up the first cut of hay.

Every tribe member, even our youngest grandchildren (featured so cutely in the photo above) are tasked with the hay baling chore at least twice a year from start to finish.

Our daughter, Brea, just shot and butchered her hog for the first time, so there will be a nice meal in the smoker for the work crew after the work of the first cutting is done.

I hope you all had a wonderful and reflective Memorial Day. It just did not feel like Memorial Day here without any formal services, or a parade highlighting our veterans.

A group of us gathered informally (without any dang mask) at the local cemetery where services usually conclude, and did a short remembrance and prayer for those who served, are still serving, and the folks who loved them.

The local police chief arrived in uniform and in his cruiser, not to check how far apart we were standing, or to tell us more than 10 people cannot gather together in public, but to join in and show respect for the fallen, as well.

I so love where we live. I spent all of my life but the last 15 years in the adjoining county, but it was a whole different world there.

We had an unwanted overnight guest this week… a chipmunk. It was running away from one of the blue heelers when the Ruger, the heeler in front, jumped on our back door and knocked it open.

I have told everyone at least a few thousand times to give that door a hard pull, or it does not shut properly. Anyway, the chipmunk was stealthy and spent the night inside without being eaten by any of our three blue heelers.

The next morning I saw it running back and forth across the wood rail around the living room. That little thing was fast, but our future son-in-law was finally able to catch it. The unwanted visitor was released outdoors to rejoin its colony unharmed.