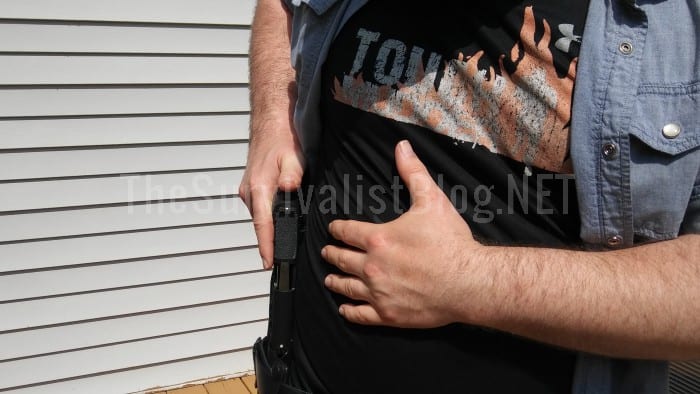 If you have made the choice to utilize a gun for self-defense, you have likely at least thought over the ethics and consequences of using it in defense of your life, or someone else’s. Guns inflict serious and life-altering wounds, wounds that are often fatal.

If you or another innocent are attacked with lethal force, it is inarguably ethical to respond with lethal force to protect innocent life. In the wake of such an event, questions will arise: except in the rarest of instances, the law will of course see you have your day in court to be judged at leisure.

***DISCLAIMER: This article is not to be treated as legal advice. The author is not an attorney. Neither thesurvivalistblog.net, its principals, owners, operators, contractors or employees, or the author of this article, claim any criminal or civil liability resulting from injury, death or legal action resulting from the use or misuse of the information contained in this article. Any comprehensive self defense plan will include preparing for the legal aftermath of any self-defense encounter. The reader should hire and consult with a competent attorney as part of your preparations. ***

A decision you made in a millisecond will be judged at ease and leisure by a jury. Your actions, words and intent will be scrutinized with hair-splitting intricacy. It is here that you will begin sweating in earnest.

Questions will not only come from servants of the law; you yourself may begin to question what you did, even if it was ruled a clean shoot. “Maybe if” will be a common refrain and constant thought.

To preclude falling victim to either of those outcomes, it pays to go deeper on the topic of lethal force. Sound judgment and training on use of lethal force will bolster your position as the victim and prevent you from shooting and possibly taking a life when the situation was avoidable.

In this article, I will present some ideas and concepts which are worth thinking about. All of them when incorporated into your training and mindset will not only make for better, more well-rounded defensive skillsets, but also improve your confidence if push comes to shove comes to gun.

Don’t Get Sucked In

It goes without saying that the best fight is one you do not have to fight, and the easiest way to shirk a fight is by avoiding it entirely. I am not advocating for any kind of passivity or submission in the face of imminent or unavoidable violence. I am advocating for avoiding confrontations that have not yet escalated into a standoff or fight.

Verbal altercations are just that, until they aren’t. Don’t let ego, anger or pride compel you to answer insults with zippy comebacks or insult in kind. As much as it may rile you, deescalate, apologize and let the other person go, or withdraw if you reasonably can.

Remember: you are carrying a gun. Even if a spat turns to “just” a fist fight, that gun does not belong to you- it belongs to whoever wants it the most.

You have no idea what will happen when the fight is on, or what your foe is capable of. Don’t introduce a gun, even passively, into any situation where violence is a likely outcome if you have any other choice. Part of this ethos is avoiding known locales and venues where fights are frequent and rabble-rousing common.

Any fight that starts out empty-hand may escalate to weapons coming out. Is that a good outcome? What about a fistfight where you are the victim, but upon you getting the better of your assailant he pulls a weapon? Or a fight where another person jumps in to aid them.

Now disparity of force is an issue. Do you pull your gun? Do you shoot one, the other or both? Not so easy, and harder still if the whole fracas could have been avoided…

Awareness Will Save the Day (Sometimes)

Full disclosure: you cannot avoid every single attack no matter how aware you think you are. And don’t believe anyone who claims they are 100% switched-on high-alert at all times, brah.

If you live a normal, civilian life, there are dozens and dozens of daily tasks that require your focused attention to complete. You could be waylaid in any one of them if you want to start getting down to brass tacks.

Go watch videos of actual incidents on YouTube and elsewhere. You will find plenty where a person was jumped or taken by surprise in a very short time frame.

The fact of the matter though is that awareness of your environment and the people around you will keep you from being caught unaware or targeted by scumbags much of the time; most classes of criminal are looking for an easy meal, and someone who is paying attention and confident is not typically in that class.

Make eye contact with people. Don’t mad-dog them, and don’t stare long enough to provoke a dominance challenge. Just a look long enough to let them know you are paying attention and know they are there.

Read the baseline on the occupants of a room or store before you walk in. Are people behaving normally? It will be fairly obvious if there is a problem waiting inside. Any obvious sign or symptom of unrest or agitation should get the brakes applied immediately.

Don’t misunderstand, sometimes you get chosen and the fight will ensue no matter what you do, but you can stay out of someone else’s sights much of the time by getting your head up and out of your phone and stopping your day-dreaming.

The Gun Should Not Be Your Only Problem-Solver

A gun is always lethal force in the eyes of the law. If you shoot someone, even in the toe, it is lethal force, and will be treated accordingly. If the only solution you have for threats or use of force against you is a firearm, you are playing checkers when you should be playing chess. Not every threat requires gunfire, even if you could articulate a reasonable, rational fear for your life.

You should be proficient with verbal de-escalation and conflict avoidance techniques, hand-to-hand skills, intermediate force options (e.g. pepper spray) and a firearm. Some people may be motivated to engage in social violence over a real or imagined slight, or simply because they are in an emotionally volatile state.

Good verbal skills can defuse a simmering situation before it erupts. If it does not, a few well-placed strikes may convince them to give up their errant ways while minimizing danger to yourself. It pays to be well rounded and have multiple tools in the ol’ defensive toolbox. Either of the above skills used judiciously can prevent a shooting.

This is not a call for vigilantism or adoption of anything like a police officer’s adherence to a use-of-force continuum for citizens. Instead, it is a call for you to equip yourself with options to meet any aggressor with an appropriate use of force in turn.

Here’s a good for instance: let’s say your attacker, Gronk, is erroneously convinced you are the self-same SOB that made a pass at his lady’s goodies, and is now determined to get his pound of flesh in reprisal according to the inviolable Code of the Meat-Heads. Gronk has about 9” and 50lbs of muscle on you.

Despite your best efforts to absolve yourself of this hideous violation, Gronk is closing fast, and the scars on his knuckles speak volumes about his proficiency at turning lesser mortals into wheelchair drivers.

Barring a bunch of black belts verified in actual street fights I don’t know about, let’s say your options are 1.) Endure vicious mauling that may cripple or kill you, or 2.) Pull your pistol and shoot Gronk.

It’s a tough call: disparity of force is an issue, but if you shoot Gronk without him having a weapon you might not fare well in court. You cannot wait for the beating to start, as a single blow from a monster like him could have life-changing consequences, and trying to draw at that close a range is fraught with peril. He might stuff your draw or take your gun.

How about option 3.) Hose him good with pepper spray. What? You don’t carry pepper spray? That’s too bad, as pepper spray is ounce for ounce one of the most effective less-lethal tools available to cop or citizen, and one of the only effective, ranged uses of force between fists and knives or guns.

Pepper spray usage has been detailed extensively elsewhere, so I won’t derail our article talking about it at length here, but let it be known that a good hit of pepper spray is effective against most people, most of the time, and will usually dissuade an enraged attacker from continuing his assault.

On the chance that they do, their senses will often be significantly degraded thanks to the effect of the delicious searing pepper solution making your fight or escape easier.

Again, it is not foolproof (what is?) and you must have a Plan B and Plan C ready to go in case it is ineffective or takes time to get to the recipient.

Despite that, it is too versatile an option to omit from daily carry, and unlike a gun, barring the target suffers a bad reaction or accident from blind stumbling, leaves no permanent injury. Get a good can from a good maker, and get training in its use.

You Must Be Proficient

Discharging your firearm in a life or death encounter, especially in a public or residential setting is a huge responsibility fraught with liability. You are legally and ethically responsible for each and every projectile you launch.

If one of them should strike someone that did not deserve one, you will be facing a bad ride through court. Doubly so if they die.

If you are forced to fire in a desperate bid to save your life, but in your understandable haste to fire miss the bad guy and that bullet strikes a bystander down the block or across the street you are responsible.

You have a mandate to not just be prepared but be good with your handgun. Handgun bullets will rarely overpenetrate a human and retain lethal velocity, but a miss is a miss, with all the danger that entails.

I’ll be honest with you, I sure don’t want some untrained, unmotivated, lackluster shooter who carries a pistol as a good luck charm touching off a pistol anywhere near me or my family no matter what the case.

I am sure you don’t either. If you know your pistol skills are lacking, it is time to drop the delusion and rationalizations as to why that isn’t or will not be a problem in your case.

Get trained. Practice. Endeavor to not suck. That’s an order.

Lethal force may be required to reduce or eliminate a lethal threat against yourself or some other innocent. While it may be unavoidable, any errors in judgment or application will not pass scrutiny in the eyes of the law, or ethically.

Taking a life or grievously wounding someone when you did not have to is a terrible thing to live with, and can will legally and socially alter your own life for worse. Take the time to develop your skills and options so that your first and only option in a confrontation need not be a bullet.