Scout rifles are an interesting concept, and greatly adored by a certain segment of rifle enthusiasts. As a concept, scout rifles were first codified by the great Col. Jeff Cooper, founder of Gunsite and father of the modern technique of the handgun. Cooper laid out a set of design criteria that he believed would result in a handy, light, powerful rifle, one that could do many things well.

This generalist’s rifle would be at home during extended forays into wild and isolated territory, carried by lone men or men in a small group, and able to perform nearly any task asked of it, be it harvesting large, heavy game or defense against fellow humans.

More than a few manufacturers have turned out production iterations that adhered more or less to Cooper’s vision, among them Steyr and Savage. In 2011, Ruger tried their hand at the scout rifle concept, and unveiled the Gunsite Scout Rifle, developed with the input of that legendary and celebrated school that Jeff Cooper founded.

The result is a rifle that closely follows the dictums set down by Cooper, and does so at an affordable price. This article will serve as a primer on the scout rifle concept, and examine Ruger’s more recent bolt action offering.

What is a Scout Rifle?

A scout rifle is best quantified as a design ethos. Cooper laid out a detailed and lengthy description of what the rifles should be, along with the feature sets he thought would best suit that end. Thusly, there is no One True Scout Rifle, though Steyr’s version came the closest according to Cooper by the time of his death.

Purists argue endlessly about what a “true” scout rifle is or isn’t based on the inclusion or absence of certain features. Cooper himself reworked or altered the elements over time, but always kept in mind his end-state he had in mind. A few of them are listed below.

Action- Cooper always advocated the bolt action as standard, though was he did not disqualify any autoloading action that otherwise met his criteria out of hand. He proscribed an action with smooth operation and round bolt knob. Today, scout rifles (commercial offerings, anyway) are all bolt action.

Weight and Length- One of the defining characteristics of a scout rifle. Cooper mandated that his ideal rifle would weigh no more than 7.7lbs unloaded with all accessories, meaning sling and optic, and a maximum length of 39 inches from crown to heel. A light, handy rifle to be sure.

Controls- Cooper insisted on a good trigger with a release of approximately 3 lbs. The safety as specified should disconnect the trigger (vs. a trigger-blocking arrangement) and allow the running of the bolt while engaged or not depending on its position. Cooper specified a three-position arrangement for the purpose. Scout rifles were intended to make use of a magazine cutoff function that would allow the shooter to single load rounds without chambering a round from the magazine.

Chambering- Here, there was much variation and alteration depending on the “class” of scout rifle the subject gun was in. Cooper declared the .308 Winchester as the de facto standard but advocated for other cartridges like the .350 Remington Magnum and 7mm-08. The use of a full power cartridge ensured the rifle was capable against all but the largest game and certainly adequate for defense against humans.

Optics and Sights- The iconic and instantly recognizable hallmark of a scout rifle, a “scout” mounted scope: a low power, long eye-relief scope mounted ahead of the action over the barrel, allowing the rifle to be loaded through the ejection port with loose rounds or with stripper clips. Backup ghost ring sights should be standard in case of optic failure.

Stock- Cooper desired a synthetic rather than wood stock for its superior environmental resilience and resistance to warping. He also wanted storage in the stock for a spare magazine and a bipod that would retract into the stock when not being used.

Accuracy Potential- A scout rifle should be capable of 2MOA accuracy.

There are other features described in detail in Cooper’s manuscripts, but the above are the most salient features. Custom builders and big manufacturers have held or deviated from Cooper’s proscription to greater or lesser degrees over the years and as I mentioned above this leads to much argument and gnashing of teeth among scout rifle purists but most commercial offerings will fulfill the mission of a scout rifle if not the exact configuration.

So how well does Ruger’s version of this classic concept live up to Cooper’s vision? How well does it compare to competitors? 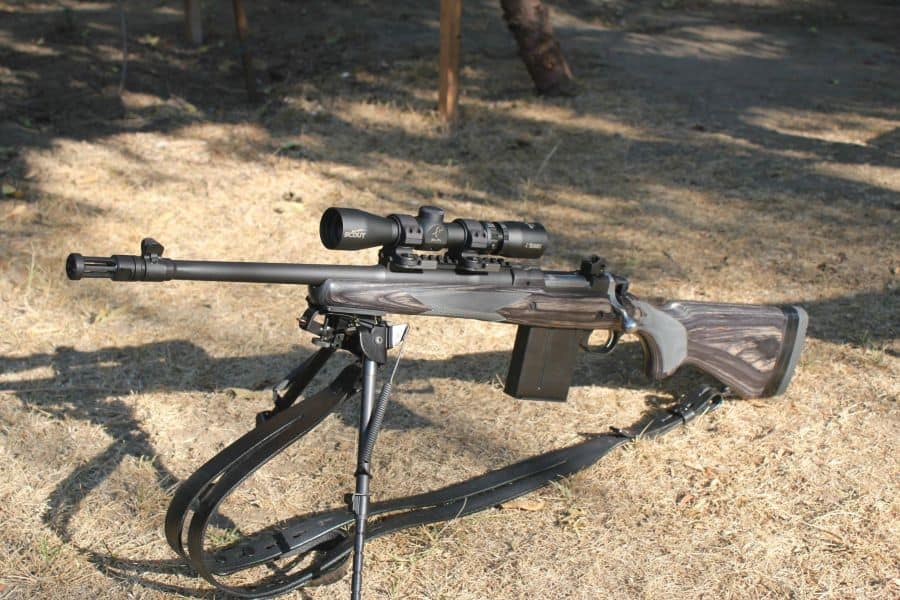 The Ruger Gunsite Scout in .308 Winchester is based on the company’s own successful and popular M77 action, which is itself a modified Mauser 98 action, and a few features lifted from the Mini-14. It retains the two-lugged bolt and large extractor claw of that rifle, but makes changes to the configuration of the ejector, which is plunger-type. The safety, which is 3 position per Cooper’s requirements, is mounted on the tang of the receiver.

The action itself beds to the laminated wood or synthetic stock by way of the trademark angled screw found on M77s. The stock accepts included spacers to adjust length of pull and is nicely checkered at the wrist and forend. The rifle is notably available in left-or right-handed versions. The one-piece bolt features a bolt knob that is round and large for sure manipulation. The receiver is machined to accept Ruger’s proprietary scope rings as an alternative to mounting an extended eye-relief scope over the barrel on the affixed Picatinny rail.

The Gunsite Scout is fed by detachable box magazines that are Accuracy International pattern, 5 or 10 rounds, and released by a Mini-14 type lever just behind the magazine well. The design of the AI magazine lips precludes single loading through the ejection port. The trigger is in essence a refined M77 design, but noticeably nicer than legacy M77 rifles. The triggerguard assembly is polymer.

The barrel is 19” with the included, removable Mini-14 style flash hider. The front sight is also inspired by later production Mini-14’s and accompanied by a winged adjustable aperture at the rear of the receiver to serve as a backup or primary sighting system.

Where Does the Ruger Gunsite Scout Excel?

There’s the trick: scout rifles as a class, and this includes Ruger’s spin, are generalist’s rifles. Modern shooters are accustomed to selecting the one perfect gun for the job, not making due with one rifle for all seasons. As far as performance is concerned, the Ruger is a fine rifle made with modern technology and standards.

Manipulation is easy and feeding is positive, though not quite as confident as a true controlled-feed action. The included iron sights are entirely adequate as a primary sighting system, but the rifle will be best equipped with an optic of some type, whether a scout scope or traditional rifle scope. If you could stand the sacrilege, a red dot sight would be a fine choice for close-in hunting or other general purpose work.

The rifle is ruggedly made per custom with Ruger offerings, though a tad heavier than Cooper would have liked at 7lbs empty sans optic. Its short overall length combined with modest weight makes for a fairly nimble handling bolt gun, and in .308 is capable of felling most game on the North American continent with ease at long range.

The Gunsite Scout meets the accuracy criteria of scout rifles with quality ammunition typically yielding groups under 2MOA. Bear in mind Cooper’s accuracy standard was a byproduct of his time: we take for granted rifles that can meet this seemingly common standard, and real accuracy buffs don’t lift an eyebrow at any rifle that will not print groups under 1 MOA. For all practical purposes, 2MOA will do everything you need a field rifle to out to 400 yards and beyond, and more than a few shooters cannot even meet the rifle’s capability.

The Gunsite Scouts biggest strength is its versatility out of the box. It is rugged and reliable. It is ready to shoot with good iron sights, somewhat uncommon on modern bolt actions. A detachable magazine makes for easy loading and unloading. It can accept and make use of a wide variety of optics, and has a nice enough trigger and the inherent accuracy to help a shooter make his shots easily.

All in all, it is hard to find fault with the concept in general, and Ruger’s version in particular. It meets all essential criteria of a hard-use rifle: accurate, rugged, reliable. The weight is not punishing. It shows good design and human engineering. What’s not to like?

Where the Scout Falls Short

The same place where it excels: it is a jack of all trades but a master of none. For hunting, other rifles can be had that are lighter and more accurate even with the scope attached. For defense, while certainly powerful enough, a bolt action is obsolescent and offers no benefits over a semi-auto, certainly.

As rifles go, scout rifles often suffer from ungainly balance in the shoulder thanks to forward-biased weight distribution. Extended eye-relief scopes offer poor field of view and typically lack power compared to their more traditional cousins, and take some practice to make the most of. The Gunsite Scout ameliorates this somewhat by allowing use of a traditional scope in its place, or an RDS, but if that is your intent for the gun it begs the question why you are choosing a scout configuration at all.

This sounds nitpicky, but a hunter would be better off choosing a more refined and specialized hunting rifle and scope. A shooter who is seeking a defense or general purpose rifle is best advised to choose a semi-auto rifle. A scout rifle can certainly do both, but is not ideal for either if raw efficiency is what you are seeking.

The romantic vision of the lone, rugged individual, a frontiersman who is on his own in hostile, wild country and relying on his one rifle to keep him fed and safe is compelling, but really does not describe anyone in America today, and probably not too many in the world. That is the theoretical person the scout rifle is intended for; it is not a battle rifle, not a sniper rifle and not a hunting rifle, whatever qualities fans might ascribe to it, though it is tough, accurate and potent.

The Ruger Gunsite Scout Rifle is largely faithful to Jeff Cooper’s concept, and a well-made gun. It can serve admirably in variety of roles, but will not fare well in head-to-head comparison against more specialized rifles. If you have need of an all-around rifle, you can do a lot worse. The Ruger Gunsite Scout Rifle is not the most faithful adaptation of a scout rifle, but it is definitely one of the nicest iterations on the market, and definitely nails a sweet spot between price and performance.

For all its quirks, the scout rifle concept is firmly enshrined in American gun lore, and shows no sign of disappearing. Ruger’s Gunsite Scout Rifle is a worthy heir to the name of both the company that has a reputation for turning out rugged rifles, and the legendary, venerated school founded by one of the American masters of the gun.

What do you think of scout rifles? If you could have only one rifle would you choose a scout rifle, or something else? Let us know in the comments!

9 thoughts on “Overview of the Ruger Gunsite Scout Rifle”