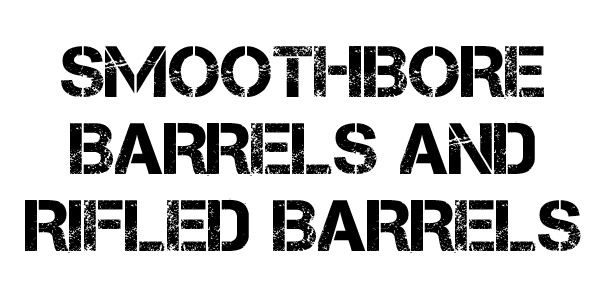 The barrel is the heart of any firearm. All other components that comprise a gun exist to fire ammunition through the barrel. It is the barrel that holds the projectile, and contains the gasses produced by the combusting powder that accelerate it along the interior, called the bore.

The accuracy, range and power we take for granted with modern firearms has been made possible by the invention of the rifled barrel; a barrel with rifling. Prior to this, all firearms had smoothbore barrels; a barrel without rifling. Rifling made it possible to fire projectiles more accurately and with higher velocity than previously possible, and though it took some time this later revolutionized the design of both ammunition and guns themselves; everything from handguns and long guns all the way up to cannons and other ordnance.

In the context of small arms, both rifled and smoothbore barrels are common today, with the huge majority of all firearms possessing a rifled barrel except shotguns, which are typically smoothbore. This article will serve as an introduction to characteristics, features and purposes of both types of barrels for newer shooters.

What is a Smoothbore Barrel?

The majority of guns through history, of any size and class, have been smoothbore. A smoothbore gun lacks rifling to spin the projectile. Early, more primitive muzzle-loading guns featured bores slightly oversized to their projectiles to allow them to fit and be rammed home for loading. This lack of precise fit caused a loss of potential velocity from propellant gases leaking past the projectile, typically a round ball at this point in history, and hampered accuracy by allowing the ball to wobble or bounce down the bore as it was fired.

Accuracy and velocity could be improved by fitting the projectile to the bore as tightly as possible while still allowing it to be seated, using an oblong, conical projectile, or by utilizing multiple, smaller projectiles at once, called shot, to increase the hit probability. Early smoothbore long guns, muskets, would typically fire a single large ball. The primitive smoothbore ancestor of shotguns, the blunderbuss, would fire a charge of shot.

It would take the invention of rifling in the early to mid 16th century for what we today would recognize as the true potential of a firearm to be realized. The advent of the conical bullet further increased performance and accuracy, but it would be another couple of hundred years more before rifling became so common as to be considered a standard feature of most classes of gun, making smoothbore barrels obsolete in modern small arms, save for shotguns.

Rifling is simply the pattern of grooves formed on the bore. Rifling is made with a characteristic spiral, or twist that gives it its name. The rifling will grip and rotate, or spin the bullet around its long axis, imparting a considerable amount of stability to it in flight to the target. Rifling also allows a better seal between the surfaces of the bore and bullet. This improved seal lets less gas from the powder charge leak past the bullet, yielding increased velocity.

Traditional rifling itself consists of raised portions, called lands, and recessed portions, or grooves. The essential diameter of land to land or groove to groove determines the gun’s caliber. Note here that the difference between the actual caliber of the barrel, and the caliber of the cartridge the gun chambers can vary significantly; this is due to a host of factors and irregularities in measurement, tradition and naming convention. What is important is to ensure you load only cartridges that match the caliber marking on your gun.

One of the other prime characteristics of rifling is the rate of twist it imparts to the bullet as it travels down the bore. This twist rate is measure by the distance the bullet must travel to complete a full revolution. So for instance, if the bullet must travel over 9 inches of rifling to complete one full revolution, the barrel (and its rifling) would be described as a 1-turn-in-9-inches barrel. This ratio is usually expressed as 1:9.

Understanding the effect twist rate has on a bullet is essential for best performance from a firearm. A general rule is that longer, heavier bullets for caliber require a faster twist to effectively stabilize, where shorter, lighter bullets require a slower twist. There is a degree of overlap, and some rifling rates are designed to shoot all typical bullet weights well enough.

Rifling is made in two broad types: traditional and polygonal. Traditional rifling is cut, pressed or otherwise machined into a barrel by a variety of methods. Some traditional rifling is created by forging the barrel around a mandrel. The nature of the rifling’s manufacture contributes to the inherent accuracy of the gun, and all methods have pros and cons. Gun manufacturers further have their preferences, and may use different methods for barrels intended for specific purposes.

Polygonal rifling differs from traditional rifling by dispensing with the sharp-edged lands and grooves arrangement and accomplishes the task of rotating the bullet by the twisting of the surfaces of the bore itself. This type of rifling gives the bore a distinctive, hexagonal or octagonal appearance, and was one of the earliest forms of rifling technology.

It is used today most prominently in handguns, but a few rifle barrels utilize this mode of rifling. One disadvantage of polygonal rifling is the tendency of non-jacketed lead bullets to leave considerable buildup on the surfaces of the bore. This buildup, if not fastidiously removed, can lead to pressure spikes and destruction of the barrel or gun upon firing.

For this reason, manufacturers that utilize polygonal rifling specify only the use of full- or semi-full metal jacketed bullets in their guns. Traditionally rifled guns do not have this quirk, as the lower grooves in the bore allow for more accumulation of lead and fouling away from the engagement surfaces between the lands and the bullet.

Rifling is the defining characteristic of pistol and rifle barrels today, with shotguns remaining the exception with good reason. Rifling is intended to let a gun fire a single projectile with great accuracy and velocity. The same spin it imparts to stabilize a bullet makes it a poor choice for firing multiple projectiles simultaneously, as the spin imparted upon a shot package will cause it to fan out more quickly than a smoothbore barrel, decreasing its effective range and pattern on the target.

The minutiae and details of any given barrel can (and have) filled volumes, and are of considerable interest to those who are seeking to achieve the best possible accuracy with a gun and ammunition combination. For the average shooter, especially a rifle shooter, simply choosing load with an optimal bullet weight for your barrel’s twist rate will usually yield satisfactory results. This ideal matchup varies from caliber to caliber.

Modern shotguns are typically smoothbores, and for much the same reason today as yesteryear; for launching shot, a smoothbore is best as mentioned above. Shot comes in a variety of sizes, from the very small BB-like pellets suitable for bird hunting, to several large pellets, each the diameter of a handgun bullet, and suitable for hunting large game and combat. The behavior of the shot package, its density on the target at a given distance, is influenced by the constriction, or tightness of the shotgun’s barrel near the muzzle, called the choke.

Chokes are described as open/loose, and full/tight. A tighter choke will produce a denser pattern, increasing the effective range of the shotgun but reducing its hit probability. A wider choke will do the opposite. Chokes are either fixed, adjustable or interchangeable. A fixed choke is a part of the shotgun’s barrel, and cannot be altered. An adjustable choke is built in to the shotgun’s barrel, but can be opened or closed to adjust the constriction and ergo pattern of the shot when fired. An interchangeable choke is one that can be unscrewed and replaced with another to change the pattern.

Modern shotguns may also utilize slugs, which are a single, usually massive projectile that behaves like a bullet. Slugs come in a variety of types, but just like a bullet require stabilization to be accurate by today’s standards. Some slug designs are self-stabilizing, but others, like sabot slugs, require a rifled barrel for accuracy. A shotgun that uses a rifled barrel is still called a shotgun, and commonly referred to as a “slug gun,” since it will not yield good performance with shot.

Rifled and smoothbore barrels have been around a very long time, and both remain fixtures in the gun world today. While a subject of seemingly endless detail and experimentation, the most important characteristics of either are simple, and easily understood. The knowledge contained in this primer will allow you to make sense of more nuanced and detailed discussions of barrels and barrel technology, and you increased mastery of the subject will only serve to make you a better, well-rounded shooter.