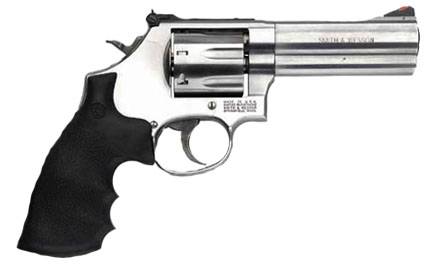 The name Smith & Wesson is synonymous with wheelguns the world over, with good cause. For over a century, S&W has been producing excellent revolvers for militaries, law enforcement agencies and well-heeled civilians. While military users are rare today, their revolvers continue to serve faithfully in the holsters of countless civilians, police officers and security guards.

It is an old trope, but the revolver is not dead. In fact far from it; while obsolescent, amid countless cries of being outmoded, outdated and outmatched, the double-action revolver, produced by quality makers like S&W, continues to steam along well into the 21st century, and is more than capable of fulfilling all essential requirements of a defensive weapon.

One of S&W’s most perennially popular medium-frame guns is the 686, a stainless, strong .357 Magnum that is heir to all of the design elements that make S&W revolvers so desirable. If you are seeking a dependable, potent handgun for defense or hunting, you can hardly do better than a 686 variant.

The L-frame 686 is descended from a long line of S&W’s successful .357 Magnum service revolvers, the progenitor of both design and the cartridge itself appearing way back in 1935 in the form of the exquisite Registered Magnum. Made to order and specification in almost every detail, the Registered Magnum was crafted to a standard and level of care unrivaled before or since. The Registered Magnum was discontinued after only a few years, but its standardized stablemate, the beefy N-frame Model 27, which has been around nearly as long remains in production today.

The impact of the Registered Magnum on the sphere of guns and ammunition cannot be understated: it was the literal genesis of magnum handguns.

The Registered Magnum and Model 27 were, and are, terrific guns, but for patrolman’s work or self-defense both were very heavy and bulky. Before the L-frame 686 was a glimmer in the eyes of S&W engineers, the .357 Magnum  was fitted into the slender K-frame, of Model 10 and M&P fame,  producing the medium framed Model 13 (or .357 Military and Police) and Model 19 (the legendary Combat Magnum). The results of stuffing the .357 Magnum into such svelte frames were hard-shooting, packable pistols, but ones that did not, at the time, hold up well to a steady diet of ever more powerful and punishing .357 Magnum ammo.

The .357 Magnum would reside in either K or N frame revolvers until 1980, when Smith & Wesson debuted the L-frame 586 (carbon steel) and 686 (stainless steel). The L frame is essentially a strengthened K-frame, with a slightly larger cylinder, to allow more metal around each chamber, and a larger opening in the frame to accommodate it. While by no means petite, this frame is noticeably leaner than the mighty N-frame, and enjoys a significant increase in strength over a K-frame gun, allowing a round-the-clock diet of powerful, full-house .357 Magnum ammo to be fired.

The 686 is today the basis of several variants, some optimized for carry, and others for competition, as well as a 7-shot model, the 686 Plus. An entire generation of shooters have grown up with the 686 as their iconic picture of what a .357 revolver is, and while many older shooters and revolver connoisseurs lament that the current generation of Smith & Wesson wheelguns will never match or hope to exceed the craftsmanship, quality and operation of those vintage models from yesteryear, the 686 is nevertheless an excellent and extremely refined .357 for most tasks. 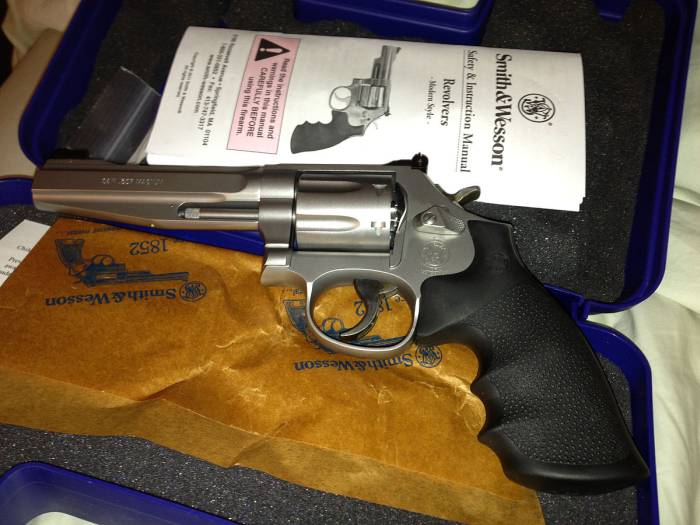 The lineage of the 686 is immediately apparent to any fan of S&W revolvers. The sideplate, cylinder release, and arrangement of the crane and ejector rod are all unmistakably Smith & Wesson in any iteration or variant.  Construction is entirely of stainless steel, with its cousin the 586 being made of carbon steel. The components of the fire control are also of traditional S&W configuration, and operation is double action, with the smooth trigger pull that Smith & Wesson is rightly famed for.

Capacity is 6 shots standard or 7 shots in the 686 Plus with its larger cylinder. Stock grips on standard models are rubber, but some variants and Performance Center models feature wooden grips. Aftermarket grips for K/L frame revolvers are plentiful and can be had in any style or material the shooter may desire.

The barrel length is a hair over 4” in the standard model, but can be had in 2 ½, 3 or 6 inch lengths to suit most purposes. Sights consist of a ramped front with high-visibility orange insert and adjustable blade rear. 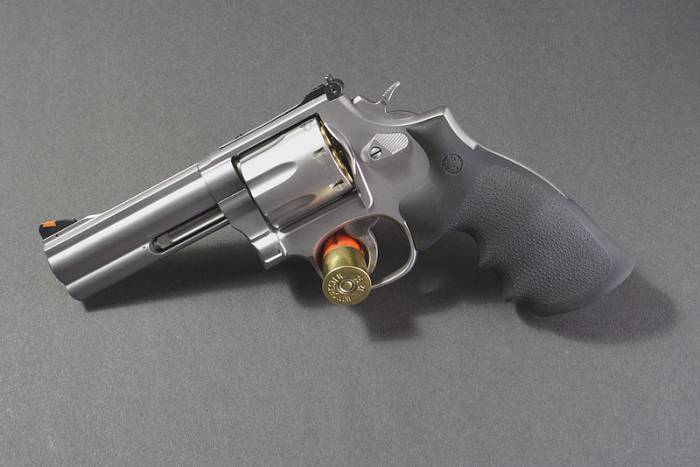 The 686 holds no surprises in store: loading and firing is typical of double-action revolvers. Pressing the cylinder release forward toward the muzzle will release the cylinder, allowing it to be swung away from the frame to the left. Ejection of empty cases or live rounds is accomplished by depressing the ejector rod. Once loaded and closed, the gun is immediately ready to fire by pressing the trigger for a double-action shot. Alternately, the hammer may be manually cocked to take advantage of the 686’s excellent single-action trigger pull and good accuracy.

There is no manual safety of any kind, but some models feature an integral key-locking system to disable the gun. This system is much reviled by serious shooters, as it has been known to fail, freezing the gun’s action.

The 686 is more than suitable as a defensive handgun: it is certainly reliable, and the .357 Magnum has a long and distinguished history as an effective round for self-defense or duty. The double-action trigger is smooth with a clean break, excellent for fast and precise shooting; an essential feature for a defensive revolver.

Modern .357 Magnum loads, while entirely adequate for defense, are considered inefficient compared to similar .38 Spl. +P loads thanks to its sharper recoil, excessive blast, typically greater flash and higher cost . The .357 Magnum can, of course, be loaded to far greater pressures than even the stoutest .38 Special, and if that level of performance is required it is an obvious choice.

The choice of a .357 Magnum to me is made even more readily owing to it being able to draw from a greater potential source of ammo; as with most .357 Magnum revolvers, the 686 can chamber the shorter .38 Special with no issues. You should, though, take care to prevent lead buildup in the chambers if using a steady diet of .38’s; this leading can lead to potentially catastrophic damage to the cylinder if allowed to accumulate before firing .357 again.

The issue of capacity is contentious in our age of larger and larger magazine sizes in semi-autos, but for civilian purposes at least 6 rounds is more than likely adequate based on the “typical” defensive shooting, though I would mandate the carry of additional ammo for a revolver in particular; each round is a chance to solve a problem and save your or someone else’s life, so the more the better.  I would not feel under armed with a 686, at any rate.

For concealed carry, even a short barreled 686 variant is a hefty, somewhat bulky gun, especially when compared to a semi-auto. The wide cylinder, as with all revolvers in its class, not conducive to IWB carry, though same may take no issue with it depending on their dress, body composition, and individual tolerance for comfort and potential printing. The 686 Plus allows an extra chamber, but the even wider cylinder on this already beefy gun may exacerbate the problem. 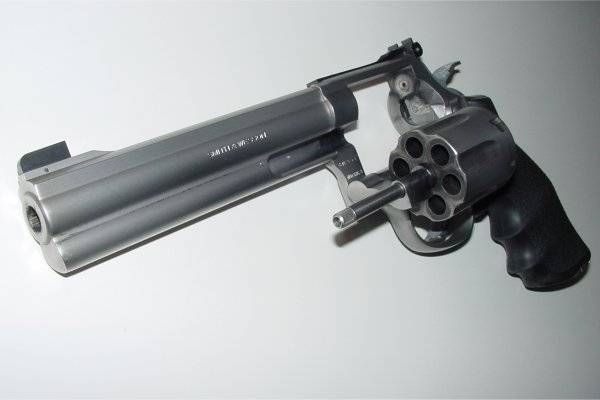 photo by Shotgun (Own photo work) [GFDL or CC-BY-SA-3.0], via Wikimedia Commons

Smith & Wesson’s early development and introduction of the .357 Magnum heralded the era of Magnum handgunning. It is only fitting that their revolvers continue to be the standard that other’s are compared against, and they continue to turn out high-quality, accurate and reliable models that countless citizens, police and security guards count on to bring them home alive when all things go sideways.

The 686 is in many ways the ideal combination of traits for today’s shooter that are seeking a thoroughly modern revolver: robust, accurate, reliable, potent, easy to shoot well, and available in a host of variations for any particular task. They are a little on the heavy side, but that is a small price to pay for a gun so effective. If you need an all-seasons .357 Magnum, the 686 is an excellent choice.

5 thoughts on “Overview of the Smith and Wesson 686”