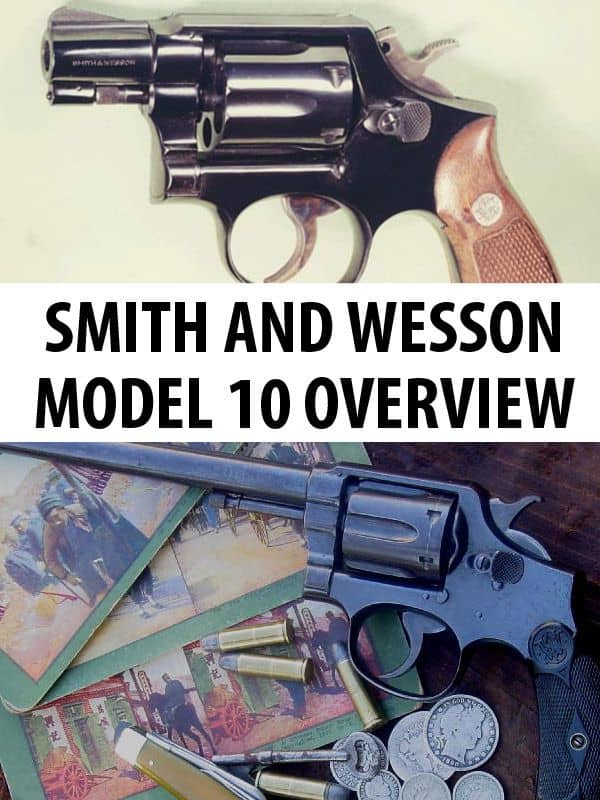 For any wheelgun aficionado, especially an admirer of Smith & Wesson’s, there is one revolver that blazed the path for millions of others. One that codified both performance and design for over a century to follow. That revolver is the legendary Smith and Wesson Model 10, progenitor of the iconic and loved K-frame, and ancestor of all its descendants. It has been produced nearly continuously from 1899 to today.

Known by other monikers at different times in its long production, including the .38 Hand Ejector Model and Military & Police (a livery recently resuscitated by Smith & Wesson for their excellent striker-fired semi-automatic pistols), the Model 10 is one of the most numerous and beloved fighting handguns ever, with a reputation that few others can ever hope to match.

Serving in almost every major war and innumerable smaller dust-ups, regime changes, police actions and civil conflicts, the Model 10 is a handgun that any serious shooter should be familiar with. Indeed, even if you have never seen or handled a genuine, vintage Model 10, you have still been touched by its legacy that lives on in even the newest Smith and Wesson revolvers.

In this article we’ll take a look at the life, times and legacy of this classic sixgun, and hopefully you’ll come away with more appreciation and understanding of its influence. 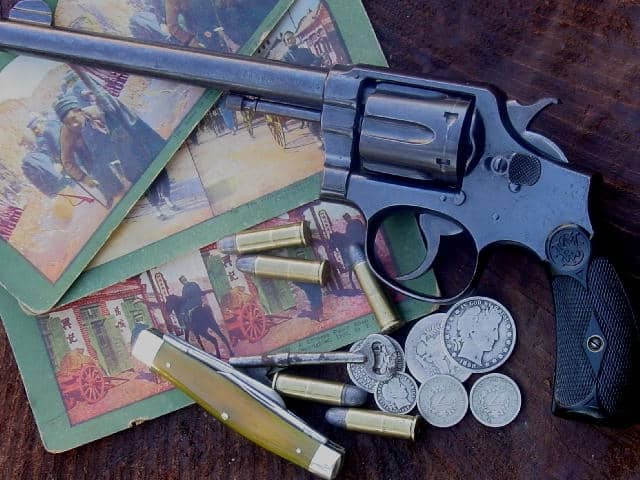 The genesis of the Model 10 was in the year of 1899, designed and produced by Smith & Wesson to fulfill a contract request from the U.S. Army and Navy for a new centerfire revolver sidearm to be chambered in the then standard .38 Long Colt cartridge. Cribbing a feature from Colt’s earlier Model of 1889, the gun featured a cylinder release mounted on the left side of the frame, a six round capacity and double-action operation. It had an ejector rod at the front of the cylinder exposed beneath the barrel when the cylinder was in battery and rudimentary fixed sights typical of revolvers of the day. Upon its adoption, the .38 Military & Police was born, only much later in the 1950’s to be dubbed the Model 10.

The new military revolver was designed around a petite but sturdy frame that would come to be known later on as the “K” frame in S&W parlance; larger than the tiny J frame, but not as massive as the L frame. A perfect size for both carry and shooting, it remains a very popular configuration today, so long as one does not require a barn-burning magnum cartridge.

Way back then when the gun was designed and adopted, America was embroiled in the Phillipine-American War. Reports from the fighting did not speak favorably of the performance of the .38 Long Colt against enemy combatants, and so Smith & Wesson took to the drawing board, redesigning and rechambering the M&P for the then-new .38 S&W Special in 1902, what we call just .38 Special today.

The .38 Special Military & Police saw other design revisions rolled out as the 2nd Model, with much streamlining of the action and trigger mechanism being foremost among them. Most relevant to many users of the M&P was the addition of a lug beneath the barrel that allowed the ejector rod to engage it securely. This added much-needed strength and durability to what was seen as a significant shortcoming of the 1st generation models; when roughly handled, dropped or abused, the thin, relatively weak ejector rod could be bent, rendering quick ejection of cartridges or spent cases difficult or impossible.

It is here, in .38 Special, that the future Model 10 was truly codified, and for all the later and many revisions, variations and options, the revolver  has been in continual production, and service, ever since. 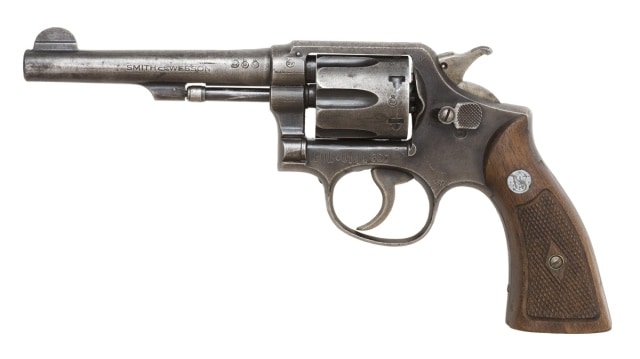 By The original uploader was Olegvolk at English Wikipedia. [CC BY 2.5 ], via Wikimedia Commons

The outbreak of WWI in 1914 saw significant and widespread innovation in small arms, greatest among them the machine gun and all its terrible effectiveness. Handguns too were in a state of great flux, with many of history’s wildest, weirdest and most iconic designs having seeing inception. The semi-automatic pistol was becoming more than a mere oddity at this time, with such tremendous guns as the M1911 and Luger being adopted by major militaries.

Nevertheless, the total dominance of the semi-auto was a long way off yet, and due to its ready availability and dependable performance, the M&P was purchased in tremendous quantity for issuance to troops. Revolvers were still seen as the standard for a defensive sidearm for many major powers in those years, France, Britain and Russia among them. Many troops and officers in the U.S. already had experience with the gun from earlier conflict in the Phillipines and elsewhere, making the purchase of the revised Model 10 an obvious choice.

A few too-short decades later, WWII erupts in earnest, and the M&P was once again called on to serve; semi-auto pistols were ascendant, but there were great quantities of M&P revolvers still in inventory, and they were sent, along with new production models, to U.S. allies by way of the Lend-Lease program. Then new production guns made from 1942 on, the so-called Victory Model, due to the V-prefix added before the serial number. Guns bound to allies using predominately British arms were chambered in the .38/200 cartridge, itself being very similar, but not interchangeable, to the American .38 Special. America, of course, continued to use the trusty and now standard .38.

In the aftermath of WWII, many of the M&P’s were phased out in U.S. service in favor of the M1911, but the guns saw continual service in all branches, especially air crews, military police, investigators and security guards all the way through the Vietnam War, even a little beyond in National Guard and 2nd Line units. It was here in 1957 that S&W changed their model naming conventions to the system we are familiar with today, and the Military and Police .38 Special was rechristened the Model 10.

The last gasp of the Model 10/M&P in service did not arrive until the adoption of the Beretta M9 in the mid eighties, and even so there are confirmed instances of this old warhorse being issued to Air National Guard aircrews as late as the first Gulf War in 1991. 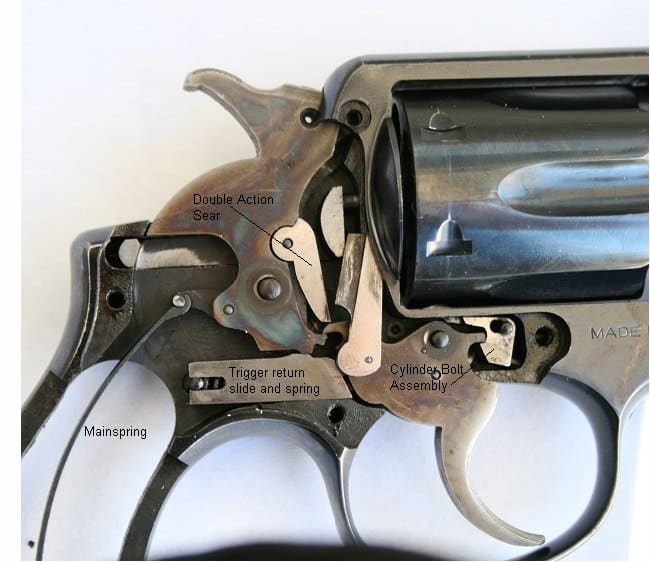 Early 2nd Model era guns were made with barrel lengths of either 4, 5, 6 or 6 ½ inches, and have a rounded butt. Guns made after 1904 had a round or square butt and 4, 5 or 6 ½ inch barrels. Note that these early models did not feature any safety to prevent discharge in the event that the gun was bumped or dropped on the hammer. The long DA trigger pull is sufficient to prevent unintentional movement of the trigger, but that is irrelevant for a revolver lacking a hammer block safety.

If you have a very early example kicking around, you must take this in to account for safe handling and transport. Models made after 1915 were changed to utilize a hammer block that reduced the likelihood of a discharge in the case of a drop or sharp impact on the hammer. It is not 100% effective in preventing a discharge, however.

The WWII-era Victory models saw a 1944 design revision to the hammer block, improving it, after the accidental death of a Navy corpsman resulting from a gunshot suffered from a dropped M&P. The subsequent victory model guns have a “VS” serial number prefix to denote the change. The Victory series M&P’s were mostly made with a 4 inch barrel, but a handful of late-production guns had short 2 inch barrels.

Regarding finishes, pre-Victory series M&P’s are typically found with varying grades of bluing. The Victory models themselves had a variety of wartime finishes typical of U.S. equipment at the time. Some were parkerized, others were finished in a satin, matte blue, and some later guns had a very flat black finish. There are plenty of Victory series guns still around on the secondary market.

As is customary for Smith & Wesson, there have been many smaller or larger changes to the commercial Model 10’s over the decades; tweaks, improvements, heavy barrels and other revisions are often characterized by a dash with a number after the base model, e.g. 10-2, or 10-6. The minutiae and worth of these different series is a topic of much spirited debate and joy among S&W enthusiasts, and an exhaustive comparison of them is beyond the scope of this article. If considering purchasing one of these guns, a call to Smith & Wesson can help you determine exactly what you are dealing with.

All of the legacy military guns featured simple, rugged fixed sights, either a round blade or a half-round blade on a large base. None are adjustable, but more than suffice for close range. Commercial variants across the decades have featured adjustable sights as standard or optional. 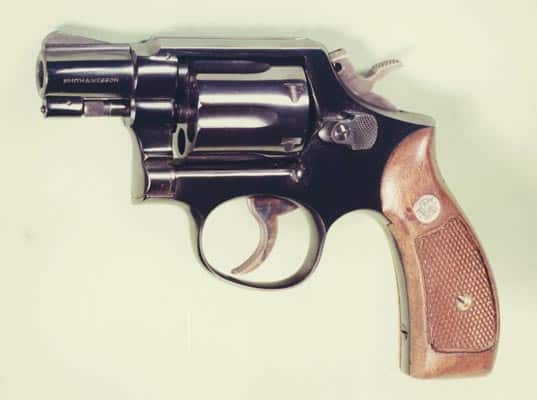 If you need a rugged, reliable, no-frills revolver for self-defense, the Model 10, and any but its oldest legacy predecessors will serve admirably. Model 10’s have served on every continent as police sidearms, and have been issued to dozens of militaries the world over. While the semi-auto pistol reigns supreme today, double action revolvers have been getting it done for over a century of conflict at home and abroad, and are still viable choices for self-defense.

Even a vintage M&P is a potent weapon, possessed of all the features and characteristics you should consider on a defensive revolver: they typically have acceptable triggers in both double- and single-action, adequate capacity (for a revolver), chamber a sufficient cartridge, and with more modern examples can safely fire +P ammunition.

Many shooters brought up in the era of high-capacity semis will probably scoff at such a plain, unadorned revolver being good for anything except display at a museum or hanging over the mantle, but aside from better sights and improved steels and alloys, modern revolvers, especially S&W’s, have deviated very, very little from this classic action.

Speaking of sights and things, the thin wooden grips on found on most Model 10’s and M&P’s can be changed for modern, hand-filling rubber or other materials. The sights are another issue: while serviceable, they do not offer a sight picture that lends itself to shooting at speed, and are hard to make out against a dark background or at night.

The sights can be altered, but as they consist of a simple notch milled in the topstrap of the frame and a fixed blade this will require the attentions of a gunsmith to accomplish. Beyond that, a thorough cleaning and smoothing up the action a little is usually alone must do to make an older model ready to serve once more.

Holsters, speedloaders, parts and service are abundant for all of the Smith & Wesson K-frame guns. There is no reason you cannot carry one concealed if your model does not have too long a barrel. For a basic defensive gun, all of this is made even more attractive thanks huge quantities of guns on the used market, and resulting low prices. True, certain very rare or old variants will fetch exorbitant sums from collectors, but for a 1950’s or 60’s era basic Model 10, one can often be bought in excellent shape for less than $200, and you’ll be hard pressed to find a better gun in its class at any price.

The contemporary Model 10, and its forbearer the Military & Police .38 Special, are among the most widely used, most respected and loved service revolvers in the world. There are very few guns that can claim to have served as long as they have and remain unchanged in essential detail. The Model 10 is a testament to good design, and worthy bearer of the Smith & Wesson legacy.

More importantly, they are rugged, reliable revolvers that have served lawmen, soldiers and civilians alike on every corner of the globe for over a century. If you are in the market for back-to-basics sidearm, the Model 10 should be near the top of your list.