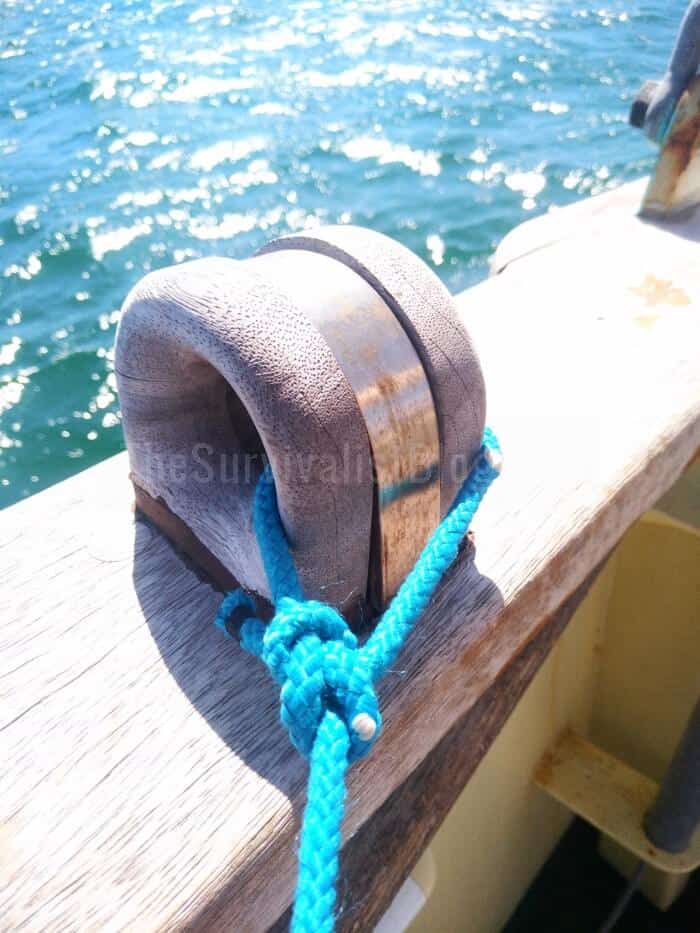 Everyone uses knots all the time and a lot can depend on your ability to make them. Thinking that lots of hitches are a substitute for real knowledge is a common mistake and the old adage ‘if you can’t tie a knot, just tie a lot’ is likely to get you into trouble.

This list contains all the knots you are likely to need, along with some variations and a few bad, common knots included as warnings. It is a much longer list than others you may have read, and this is intentional.

There is no substitute for real knowledge and it is far better to know and not need a knot than to need it and not know it. Anybody reading this will know the value of having the right tool for the job and knowledge weighs nothing, so learn all of the knots you can!

Knots have their own language. There are so many knots, of such different kinds that it would very confusing to simply have ‘knots’ made in ‘rope’. There are different words for each type and part of a knot, for how they are made, and what they are made in.

The following is a general glossary to help you better understand the instructions given for the linked knots. Obvious terms like ‘binding knot’ (a knot for binding things together!) have been excluded for brevity.

Line is what knots are tied in.

The Working End is the end of the line which is being used to tie the knot. It is normally the end you would hold and move about in tying.

The Standing End is the other end, which is not actively moved in the tying process.

A Bight is either:

A Loop is either:

A Round Turn is two turns, or two full wraps around a post or pole.

The Tail is the end of the line which comes out the knot at the end, once it has been tied.

An Anchor is a strong, secure point which the line can be secured to.

A Hitch is a knot for securing the line to an anchor point.

A Bend is a knot for joining two lines together, usually at the ends.

If a knot Jams it becomes impossible to untie with fingers and nails.

A knot is Slipped if it is tied in such a way that pulling on the working end opens it up / unties it.

Splicing is securely connecting parts of lines by interweaving their strands, or pulling the braided lines through themselves.

Rope is made to be strong when pulled in one direction: along its length. When you make a knot and apply force, within the knot the line will be stressed across the rope’s materials, as it curves. This massively reduces the strength of a line at the knot, sometimes by up to 80%.

For a good allegory, think about how difficult it is to pull a pencil in two pieces by pulling on the ends in the direction of the grain of the wood, (the direction of its strength) compared with how easy it is to snap it in half across the grain.

Remember this if ever relying on a line for anything. If it’s important, get your hands on a line with a rated manufactured breaking strain, and for safety’s sake make sure the rating is many times above the strain you expect the line to actually need to handle.

Splicing weakens lines far less than knotting, and so could be considered to be a stronger way of achieving the same thing (splices can be made to join lines, and form loops in lines).

Wherever possible and practical, it is better to splice permanently than to tie a knot, though splicing is a vast topic, beyond this article to deal with. You can learn more about it from the further resources at the end.

Survival Knots You May Want to Know

These are knots for making a loop or loops in the end of a line, for securing a line to something where the line will not always be under load (like a bag to be hoisted, but which will sometimes be on the ground with the line slack). You will probably end up using these most often, so learn them well.

Mid loops are knots which produce a loop in the middle of the rope. a s such, they can all be tied on the bight without using the ends. They are mostly useful as connection point, between ropes and other ropes or hardware like shackles and carabiners.

Of course, all mid loops can be used as end loops, by tying the knot very close to the end of the line, but what distinguishes them is that they do not need the ends for tying, so can be easily tied right in the middle of a line.

A hitch is a knot for securing a line to an object. All knots which are considered hitches will draw up close around the object (or can if adjusted correctly), which distinguishes them from ‘loops’, which form loops of fixed size which do (or should!) not change under tension.

However, all loop knots can make a loop which is snug around an object, so most loops can be used as hitches if necessary, especially when the knot is unlikely to move away from where it was tied.

For example, a bowline in place of a hitch would be fine if tying onto a secure ring, because it would be impossible for the bowline to slip out of the ring (presuming it was tied correctly), so it wouldn’t matter if it didn’t draw up tight, so long as it was secure.

An end loop (a bowline) is not a great choice here, as it might slip off.

On the other hand, a loop would be no good for tying securely onto a slippery pole, because it could easily slide off the end (especially if it was not very tight), so a hitch which tightens up snug around the pole would be better.

A (Clove) hitch will perform much better.

On the other hand again, when securing a line to non-round object, especially if it will not slip out (like the clew of a sail, a key ring, or the lanyard hole in the end of a knife) then a loop is often better because it will stay strong even though it does bind evenly around the surface it is tied on (as a hitch would on a smooth, round surface).

In general, then: hitches are good for round poles, rings, and situations where it is absolutely necessary the line draw up tight. Loops are for irregular shapes and closed tying points.

Often confused with hitches, binding knots are knots used to secure a bundle or loose objects or fabric together. When pulled tight, they exert force down into the centre of the bundle, holding it tight.

‘Friction’ binding knots hold the bundle with the friction between the turns of the line around the bundle, whereas ‘knotted end’ knots have the two ends tied together.

Generally, the first type is easier to tighten, but requires many turns so is better for smaller bundle (because many turns around a small object is still not much line) whereas the second is better for bigger loads (because passing a line multiple times around a large load needs a lot more line).

In general, it is better if possible to just use a longer line than two together. All knots weaken the line they are tied in to some extent, and will make it ‘lumpier’ and more unwieldy if passing through pulleys or small holes like the guides in a fishing rod.

That said, sometimes it is necessary to join two lines for length or because two lines with different characteristics are needed (most commonly in fishing, where several different lines are joined in succession).

One way to classify different bends is how they join the lines. Some bends are essentially a hitch of one line onto another, or a bight or loop of another. These include the Nail Knot and Albright Knot and to some extent the Sheet bend and Becket Hitch.

These are the knots to use for joining very different lines: generally the thicker line is the one being hitched to (so you will manipulate it far less in the tying process) and the thinner or more slippery line is the one with which most of the knot is actually tied.

The rest of the bends (except the Bowline Bend, which is a special case) are ‘proper’ knots, where the two lines interact more. These are often stronger, but only for lines of similar diameters. They are not recommended for lines of different diameters.

Stopper knots are large lumpy knots, normally made at the end of a line, to stop the end passing through something (a block, pulley, hole etc.) which the line travels through.

They can also be made around the standing part of a line after another knot, to stop the working end being pulled backwards and the knot opening (this is very common practice among climbers and search and rescue personnel).

Common practice is to ‘clap on’ (as C. Ashley would say) a stopper at the very end of a line leaving only enough of a tail to make sure it doesn’t come out:

This will achieve what the knot is meant for: it stops the end of the line being pulled through wherever the line goes.

However, in situations where this is actually useful (a sailor controlling a runaway sail where the line has jumped out of their hands, or a rigger securing a load from falling too far) the next thing the person in question wants to do is generally to pull the line back in (i.e. to pull the stopper knot away from the block, hole etc.).

It is very difficult to get enough purchase to do this if the tail is only an inch long!

So when using a stopper knot in a situation like above, it is often a good idea to tie it a good way (perhaps as much as several feet) back from the end, to have some line with which to pull if the stopper knot ever actually becomes important.

Pictures in this guide all have short tails to make it easier to see the structure of the knot.

Lashings are used to secure two objects (normally long thin things like poles) together as rigidly as possible. They are useful for building, and for securing large objects for transport or safety semi-permanently. For security the most important thing is to get the lashing and frapping turns tight.

These are the knots, compound knots and rope-structures which are so useful that they IhadI to be included, but which don’t really fit anywhere else. This section includes a few things which are not strictly knots, but are combinations or systems made of line and knotting principles, so fit best into the knotter’s toolkit.

There is a lot more to learn about handling lines! This article is a good start, but it does not even touch on splicing, decorative knotting, complex rigging, whipping or knot theory.

3 thoughts on “Survival Knots You Should Know How to Tie”