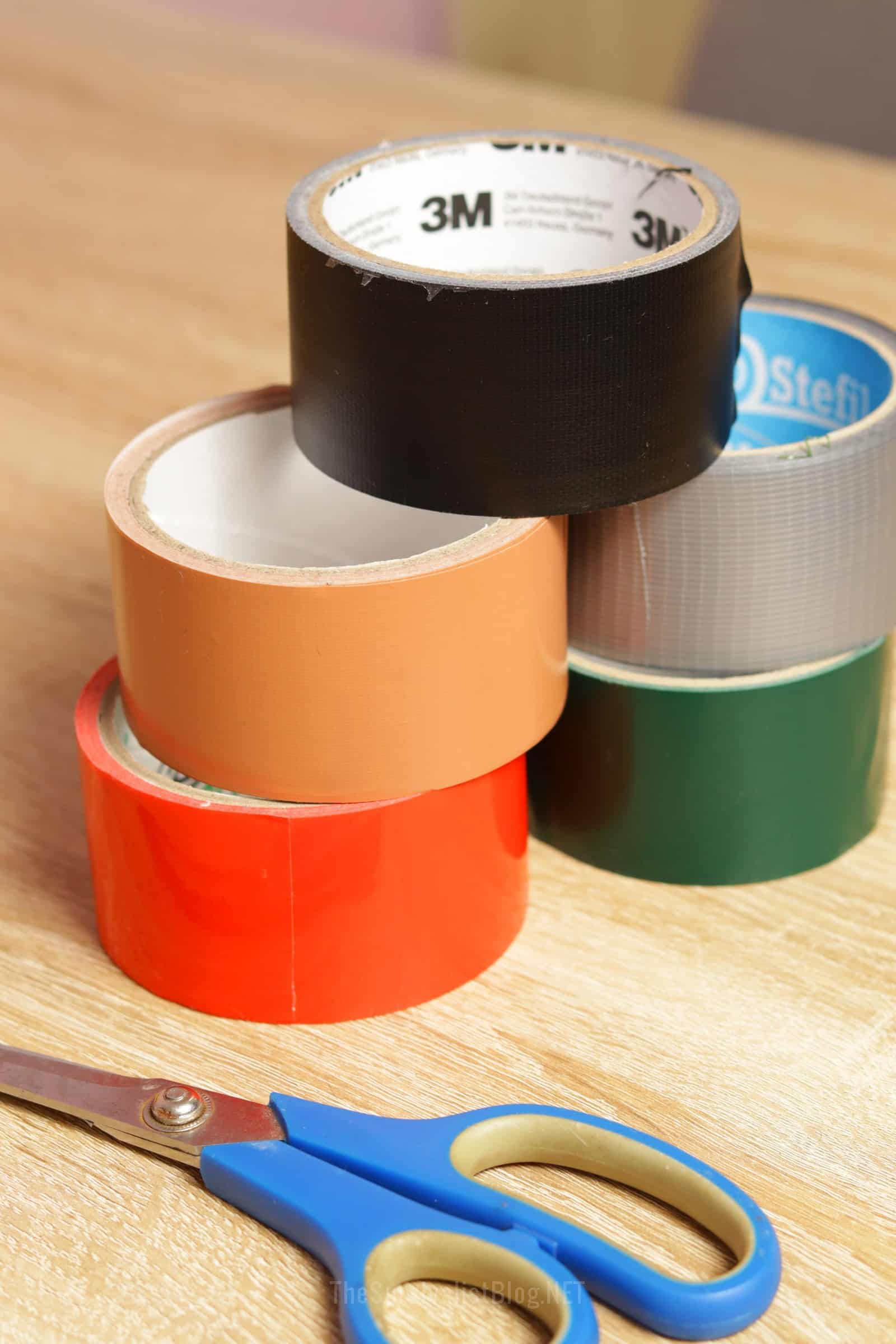 Whether you’ve always called it “duck” tape or “duct” tape, this waterproof adhesive tape has existed since the early 1940’s. First manufactured by the Permacel division of Johnson and Johnson, to meet the needs of the military, it was called “DUCK” tape because of its waterproof feature.

But by the mid-1940’s, “duck” tape was being used to seal leaky aluminum duct joints used in central heating.

By the mid-1940’s its legendary stickiness, ability to adhere without drying out like other tapes, along with the fact that its adhesive was non flammable, made it the perfect seal for leaky joints in aluminum ducts needed for central heating.

Since then, duct tape has gained the reputation of being able to “fix” just about anything, it has been used to lift a car, and there is an annual duct tape festival as well as duct tape creation exhibits and contests. It has been manufactured and sold under several different brands over the last six decades or so.

1. Repair a hole in your tent by covering the area with duct tape on both the inside and outside.

4. Temporary Fix for a Broken Zipper by using duct tape to keep your tent closed.

5. Repair Siding temporarily using duct tape to prevent further water damage to the structure underneath until it can be replaced.

6. Secure a Broken Window by taping the broken pieces of glass back in place.

7. DIY Roof Shingle by wrapping a damaged shingle, a piece of plywood, or even cardboard to temporarily repair a leaky roof

8. Patch a Ripped Tarp (Tarps have many uses themselves, by the way.)

9. Add Layer of Insulation to House or Cabin by using duct tape and garbage bags, plastic sheeting, or other materials.

10. Block Light in Windows by covering with duct tape when you need to hide light from potential intruders.

11. Seal Doors and Windows Against Threats in the Air (Smoke, Radiation, Chemical, Pathogens, etc.) by using duct tape to seal off any openings.

12. Add Loops to Emergency Space Blanket using duct tape so you can hang it as a tarp or curtain.

13. DIY a Blanket from Found Materials by laying sticks, leaves, grasses or other materials in a blanket formation and wrapping with duct tape.

14. Make a Hammock from duct tape and poles or sticks.

15. Alternative for Medical Adhesive Tape can be made by covering the wound with gauze and wrapping with duct tape:

16. DIY Steri-Strips or Butterfly Bandage to pull edges of lacerated skin together until medical attention is available or it heals on its own.

17. Create a Sling for an Injured Arm

18. Pull Out a Splinter or Thorn from your skin by applying the duct tape to skin and then peeling it off quickly.

19. Substitute for an Ace Bandage to provide support for an injured ankle, knee, or wrist.

20. Protect Against Blisters by placing a piece of duct tape over your sole and heel to prevent it from rubbing against your shoe:

21. Remove Warts with duct tape by covering the area for up to 7 days. Replace when it gets wet but wear continuously. The duct tape essentially smothers the virus that causes warts.

22. Padding for Crutches can be made by wrapping some type of padding over a y-shaped branch.

23. DIY Eye Patch out of duct tape can work in a pinch

24. Wrap Injured Ribs with duct tape to provide support until they heal

25. Make a Stretcher using duct tape and poles or saplings with duct tape in a criss cross formation between them:

26. Create a Water Resistant Bandage Cover for Injured Animals by using gauze wrapped with duct tape or even slipping a sock over the injured limb and wrapping with duct tape.

28. Reattach Shoe Sole with duct tape to keep cold and water out.

30. Insulate Boots Insoles by wrapping them with duct tape:

32. Shorten Pant Legs by folding them up and securing with duct tape

34. DIY Camouflage by using earth tone patterned duct tape to create a hunting blind or cover your clothing or tent.

36. Make a Hat with duct tape when other head coverings aren’t available to keep your body heat from escaping in cold or wet weather.

38. Protect Against Ticks and Other Insects by wrapping duct tape tightly around the hem of your pants.

40. Keep Snow Out of Boots by wrapping duct tape around your pant legs at the top of your boots.

41. Repair a Hole in Pocket Lining by placing a patch of duct tape on either side of the hole.

43. Secure gear to your pack

47. String or Hang Lantern or Other Lighting

51. Make a Lanyard to Hang Glasses or Other Gear On Your Neck

Use Duct Tape for Auto Repairs

52. Fix a Leaky Auto Hose by wrapping it with duct tape until you can replace with a new hose.

53. Secure Broken Headlight or Taillight using duct tape to hold it in place.

54. Expand Vehicle Storage by using duct tape to attach supply containers to the roof or sides of your vehicle.

55. Temporarily Patch a Tire by sealing the leak with duct tape. For a puncture, you may be able to make a plug by wrapping duct tape around itself and pushing it into the hole.

56. Repair a Broken Rear Axle on Car using duct tape and something rigid such as broken rattan furniture or any other rigid material. It won’t hold forever but it may get you to back home or to a repair station.

57. Fix a Broken Hood Latch with a piece of duct tape.

58. Temporarily replace a fan belt or alternator belt on your car by taping the ends together or by wrapping the broken belt with duct tape to repair it.

Additional Ways Preppers Can Use Duct Tape for Survival

59. Hide Prepper Supplies from prying eyes by duct taping them under tables, nightstands or shelves.

60. Hang Meat and Food Away from Animals using a rope made of duct tape.

61. Seal Food for storage using duct tape if other methods aren’t available. You can even wrap food containers or zip lock bags in duct tape for additional protection against the elements.

62. Add Extra Protection to Ammo Boxes by sealing the lid and other seams with duct tape.

63. Patch Your Canteen or Water Bottle

64. DIY Flystrips by cutting strips of duct tape and hanging them sticky side out outside of your tent or around your campsite.

65. Fix a Leaky Bucket temporarily with duct tape on the interior and exterior of the hole.

66. Handcuff an Intruder using duct tape in a pinch:

67. Color Code Boxes of Supplies and Gear using different colored pieces of duct tape such as red for ammo or other flammable materials.

68. Repair a Fishing Pole using duct tape so you can still catch dinner.

70. Temporarily Patch a Leaky Boat using duct tape on both the exterior and interior of the hole. If other materials are available, sandwich it into the hole and seal on either side with duct tape.

71. Fix a Broken Crossbar on Canoe with duct tape until you can make proper repairs.

72. DIY a Spear using duct tape by attaching your knife or a sharpened rock to a long sapling or pole.

73. Use Duct Tape as Trail Marker by attaching it to trees or other objects along your path so you can find your way back

74. Send a Signal to rescuers by using fluorescent or brightly colored duct tape.

75. Wrap in Bird’s Nest Formation and Use to Carry Water or Coals for short distances. If using for coals, make sure you have a high quality tape rated for up to at least 200 degrees Fahrenheit.

76. Make a Cup or Straw for Drinking by wrapping duct tape sticky side out around a rock or stick. Your final piece of tape should be sticky side down. Remove the object from the inside before using

77. Fill a Water Bob-Hands Free by duct taping a tube or piece of pvc between the faucet and the spout of the water bob. It beats having to hold it while it fills.

78. Temporary Replace a Lost or Broken Container Lid with duct tape by wrapping it over the top of the container.

79. DIY Knife or Hatchet Sheath out of duct tape to protect your blade from damage. You can also place some duct tape directly along the blade:

80. Repair or Replace a Rifle Sling using duct tape until you can obtain a proper replacement.

81. Alternative for Arrow Fletching can be made by using strips of duct tape along one end of your arrow shaft:

82. Make a Blowgun by rolling duct tape into a cylinder to blow darts or other small projectiles through.

83. DIY a Temporary Boat out of duct tape and wood, pvc pipe, or saplings:

84. Ramp Up Your Shotgun by using duct tape to fix a light or even extra ammo to the side of your gun.

85. DIY Magazine Coupler for Efficiency to keep additional ammo at the ready..

86. Make a Sign or Leave a Note by writing on a large piece of duct tape or using the duct tape to spell out S.O.S in large letters.

87. Create a Small Torch using duct tape by wrapping it around one end of a stick and lighting it on fire.

88. Start a Fire using duct tape with your fire striker:

89. Snake Bite Protection using duct tape wrapped around your shoes and pant legs for an added layer of protection in case a snake strikes.

90. DIY Animal Snare from duct tape can help you put food on the table in a survival situation.

93. Reinforce Windows Before a Hurricane by using duct tape in an X or even a star formation to brace the glass and prevent it from shattering:

94. Cover Your Tracks with duct tape on the treads of your shoes to stop your shoes from sinking into the ground and make it more difficult for someone to track you.

95. Protect Against Snow Blindness by fashioning makeshift sunglasses from duct tape. Leave a slit for each eye so you can see out:

What’s your favorite brand of duct tape for survival use? Have you used duct tape in a survival or emergency situation that we didn’t include in our list? Let us know in the comments below.