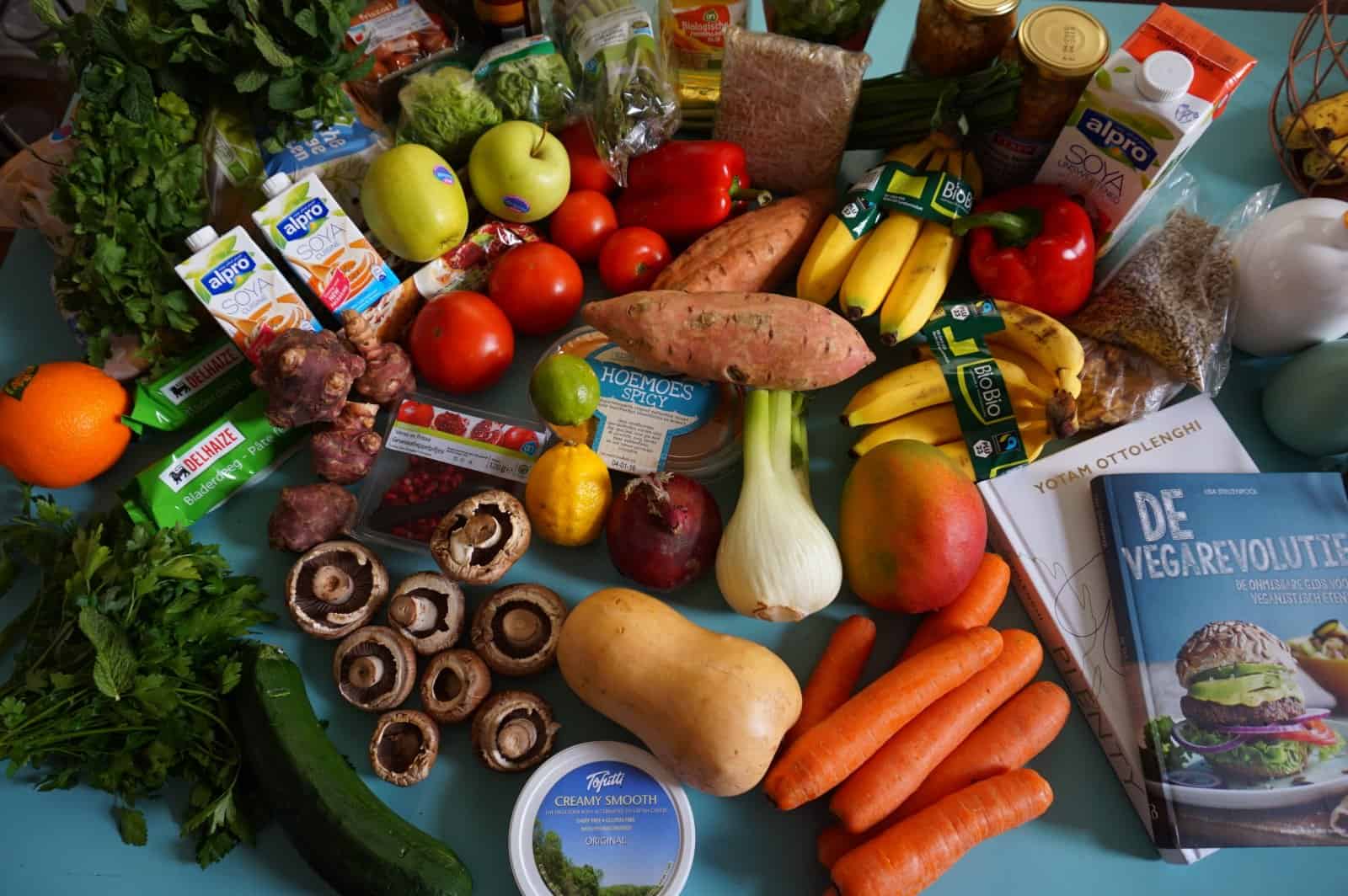 Vegan food doesn’t have to be difficult to prepare – in fact vegan food is pretty simple, tasty and healthy.

Veganism is a way of living adopted by people who want to live without exploiting animals or causing them harm. Hence their policy of not only abstaining from meat, but from other animal products such as eggs, milk, yogurt, and for some folks, even honey.

They also do not use animal products such as leather. Being a vegan certainly teaches one to look at labels closely.

An acquaintance who had newly converted to veganism was shocked when she studied the ingredients list on a pack of Jelly Babies, a jellylike sugary sweet, she had been given. She found the sweets contained gelatine derived from boiling animal bones, tendons and ligaments.

Agar agar is a plant-based alternative , derived from seaweed, that is commonly used by vegans to replace gelatin.

Vegans are advised to check labels on certain products, but the majority of the ingredients in the recipes below are pretty straightforward – things you can grow in your garden, in pots on a balcony garden, or may have in your stockpile.

These recipes also give a non-vegan some good ideas of what to prepare for events that include vegans. They may even inspire you to start down the path of a kinder journey through life.

There are a number of spices to add to this recipe, making the list of ingredients rather long, but don’t let this put you off what are basically aubergine slices, onion, garlic and tomatoes baked in a delightful coconut milk with flaked almonds. Get the recipe.

This creamy rich curry is made with aubergine, onion, potato, and button mushrooms. The coconut milk sauce is infused with all the flavor of a ready mixed curry paste, so you don’t have loads of ingredients to worry about.

Chopped cilantro from your herb garden, whether it’s on a windowsill or in the ground, will finish off this dish to perfection. Get the recipe.

This recipe is perfect for preppers – everything can come from your stockpile – the basmati I rice, the can of chickpeas, raisins, vegetable stock, frozen spinach, cashew nuts and a coconut yoghurt to serve – which is optional. Get the recipe.

Chickpeas, onion and garlic, are combined with an array of seasonings that add some spice to the falafels which are served with toasted pita bread, a tomato salsa and a garden salad. Get the recipe.

Besides the base of chickpeas this biryani has thinly sliced red bell pepper, carrots, onion and loads of beautiful fragrant Indian spices like cardamom, cinnamon, cumin, cloves, turmeric, and it has cashew nuts and raisins. What an explosion of flavor. Get the recipe.

6. Vegetable tagine with chickpeas and raisins, served with couscous

Couscous, cinnamon, and raisins just seem to go together. Add in all the lovely fresh vegetables of this tagine and enjoy a taste sensation filled with the spices of North Africa. Get the recipe.

You can swap out the cauliflower for roasted red pepper, or maybe roasted courgettes, but don’t swap the curried mashed potatoes that give the wrap its creaminess and hold all the other ingredients together. Get the recipe.

The easy warmed hummus served with pita bread is served with garlicky pine nuts, raisins and Kalamata olives, with an extra drizzle of olive oil.

If you prefer to swap out some of the ingredients – for example include cashews nuts and roasted red pepper, and sun dried tomato instead of the raisins, pine-nuts and olives, then feel free to do so. Get the recipe.

Avocadoes add to the creamy yumminess of these burritos, but if they aren’t in season, you can swap for almond or cashew nut butter, which has similar nutritional values. Black beans, various spices, onion, rice, lime, cilantro, and hazelnuts make these taste so good. Get the recipe.

The black beans, onions, spices, oats and sweet potatoes make for a yummy burger. In this recipe it is served on a traditional bun but you may want to swap for a gluten free option. The burgers are best baked as the ingredients are quite soft and they will fall apart on a grill. Get the recipe.

These vegan baked beans rely for their flavor on tomatoes, thyme, paprika, brown sugar and soy sauce. There has been some debate as to whether soy sauce contains fermented fish but it contains fermented soybeans and is suitable for vegans. Get the recipe.

No need to forego pizza if you are vegetarian – the garlic, basil, oregano, tomatoes, olive oil and a vegan cheese make these pizzas tasty. The dough is a yeast based one that does take a little time to prepare. Get the recipe.

This is a burst of flavor – from the quinoa with the dried apricots and toasted flaked almonds to the chickpeas, butternut, onion and tomatoes redolent with spices like cumin, cinnamon, turmeric and paprika. Serve with cilantro and mint. Get the recipe.

When it comes to picking the most versatile vegetable and one you could live off if forced to for a long time the potato would probably win in a poll, but I reckon the butternut might come in second.

Here roasted butternut is stuffed with quinoa, shiitake mushrooms, sautéed shallots, and drizzled with balsamic vinegar. Get the recipe.

For a lunch or dinner, cut sweet potatoes in half to bake them faster, then serve with roasted chickpeas, and a hit of Mediterranean flavor in the tomatoes, parsley and herbs. Get the recipe.

The smoky flavor of the roasted sweet potato and paprika with the black beans rolled into an enchilada and baked with a rich red enchilada sauce will have guests coming back for more. Get the recipe.

The ‘pasta’ in this dish is made from the potatoes which are spiralized, u the real secret is in the sauce. Get the recipe.

This recipe uses a Thai red curry paste but you will need to check the label to make sure they haven’t included non-vegan ingredients. Sweet potato, spinach, coconut milk and peanut butter combine with the red curry paste to create an exotic dish. Get the recipe.

All the delights of the yummiest vegetables with olive oil and a vegan parmesan cheese together with loads of herbs make for a great dish. Get the recipe.

A vegan cheese sauce covers layers of Yukon potatoes that have been thinly sliced, and baked after being sprinkled with vegan parmesan cheese. Definitely a moreish dish. Get the recipe.

21. Baked potato with zucchini and mushroom

This dish has the layers of potatoes with mushroom and zucchini for added flavor. Cashew nuts, non-dairy milk, garlic, onion, and vegan cheese complete this tasty bake.

For added color it is sprinkled with chopped fresh chives after coming out of the oven. Get the recipe.

For those who like the classic taste of a potato bake this one sticks to the onion, garlic, potatoes and herbs and spices without the cheese. It’s creamy plant-based deliciousness. Get the recipe.

Red lentils and sweet potatoes are combined with ingredients like Thai basil, spring onions, garlic and spices to create a super healthy dish. Get the recipe.

This is one of those salads that is hearty enough to form a light lunch, or be served on the side with a baked dish. Into the mix go golden raisins, diced cucumber, red onion, red bell pepper, garlic, maple syrup, olive oil and celery. Get the recipe.

Another lentil salad, but this one uses carrots, cherry tomatoes, fresh parsley as well as green and red bell peppers. Get the recipe.

Another lentil salad but one I could definitely go for with its additions of dried apricots, toasted almonds, celery for crunch, and a fresh mix of mint, cilantro and parsley. Get the recipe.

The recipe calls for soy sauce but just check the label to ensure it is a vegan friendly one. Sesame seeds provide a nice contrast to the rich glaze, with the tofu served on a bed of rice. Get the recipe.

It takes just five minutes to whisk the ingredients for this pudding together, then you leave it in the refrigerator for four hours to thicken up. When you are ready, serve it topped with berries and cacao nibs. Get the recipe.

These are delicious. So easy too, with everything available from a good stockpile – except for the fresh bananas. If you don’t have bananas you can add frozen or fresh berries in place of bananas.

Without egg and milk they are a little more delicate than ordinary pancakes. Get the recipe.

This fudgy chocolate cake is rich and suitably decadent as a chocolate cake should be. The fact that it’s eggless, dairy- and gluten- free takes nothing away from the taste. It does not taste of avocado – that just gives it a rich creaminess. Get the recipe.

We can’t leave without a vegan recipe for brownies – that much loved sweet treat that kind of came about by accident when a recipe went a bit wrong – but what a happy accident.

This recipe supplies what everyone expects from a good brownie – a bit chewy round the edges, soft chocolatey fudgy center and a bit of a crackle on the top. Probably not the healthiest but with all the healthy recipes supplied here maybe it’s time for a bit of decadence! Get the recipe.