Ammo cans and prepping go together like peanut butter and jelly. Like cheese and crackers. Like, well, you see where I am going. There is hardly a shooter or prepper alive that does not have at least a couple of these sturdy, reliable green cans around, packed with ammunition or loaded magazines. Ammo cans are rugged, highly water resistant and feature a handle perfect for quickly lugging or loading them into vehicles.

Even preppers who don’t have tons of ammo to store, or even use guns themselves are endeared with these things; all the qualities I just listed above make ammo cans ideal for storing all kinds of things with added protection against bumps and bangs. They make pretty good small toolboxes, and can even be used to make cheap yet solid Faraday cages. There was a time once when you quite literally could not walk into a gun shop, sporting goods store, hardware store or mil-surp warehouse without tripping over a giant pyramid of these ubiquitous green cans.

Sadly, the supply of surplus ammo cans has started to dry up. What searching once produced near pristine cans will typically now only yield battered, rusty tuna cans with crappy seals. While it seems the heyday of cheap, plentiful, nice ammo cans is nearing its end, take heart that there are still plenty to be found if you know where to look.

In this article, I will provide you with a guide for grading and locating ammo cans that will keep your munitions (or whatever else) dry and safely stored.

The military surplus ammo cans (and some commercial reproductions of the same) we are talking about today are metal, not plastic. Plastic ammo cans are commercial products of greatly varying quality and utility. Military metal ammo cans, in all their sizes and forms, are prized for their ruggedness and quality coatings. All this assumes they are in excellent or very good condition, of course; you can take your chances with a battered mil-surp ammo can, but the results will likely not be pretty.

Military ammo cans were designed and tested for exacting standards of weather, condensation and water resistance, durability and corrosion resistance in all manner of environments. To do so they use heavy, sealing rubber gaskets on their lids that mate snugly to the bodies of the can.

They are designed to hold their appropriate weight in ammunition without flexing, bending, breaking or doing anything undesirable. This sounds like a small thing, but ammo is heavy! Any container carrying a quantity of ammo must be rigid lest it fail and spill. All in all, military ammo cans are tough enough for the job at hand, far tougher than they need to be actually.

Plastic cans, on the other hand, who knows? In light of published testing and design standards, they may or may not do their jobs well or at all. I have owned all manner of plastic commercial ammo cans. Most of them are not worth a dime. They may feature a chintzy foam seal instead of a proper gasket. Many flex when fully laden, and their flimsy handles are prone to failure when fully loaded. Condensation is a serious issue with many plastic cans, especially when exposed to temperature extremes. At best, plastic ammo cans may work ok for light loads or as basic utility boxes, but are a crapshoot if you plan to load them to capacity with ammo.

I do own some plastic cans that I would consider very high quality, and use them, but these are the exception not the rule. If you want to be sure that your ammo or whatever other items you might be storing are going to keep well, take the time to find and, if needed, spring for genuine U.S.G.I. surplus metal ammo cans.

Accept no substitutes. Yes, they are heavy. Yes, you will rue the day when you stub your toe on a loaded one late one night. Yes, they smell a little weird, and may need some TLC to bring them up to 100%. None of this matters; they are worth every bit of it compared to their cheesy commercial brethren. 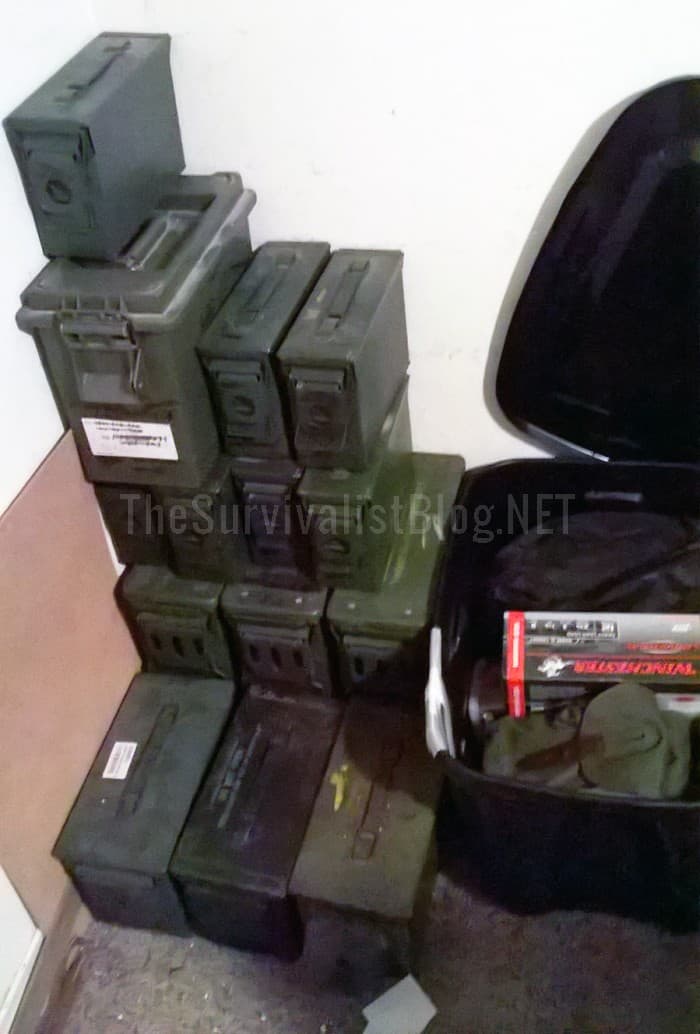 Grades and Types of Ammo Can

While there is no properly official body that grades the condition of military ammo cans, you will see them commonly referred to in listings as Grade 1, Grade 2 or Grade 3. This grading system was, to my knowledge, implemented and popularized by Midway USA who happens to be a major purveyor of fine surplus cans. It has been widely adopted and spread throughout the internet, surplus retailers and elsewhere, so I will repost it here for your edification.

Most USGI cans will be the common .50 caliber or .30 caliber varieties. The .50 cal cans measure 11” long by 5 ½ “ wide, and are 7” deep. The .30 caliber cans are noticeably skinnier and measure 10” long by 3 ½” wide and also 7” deep. Each features a folding metal handle that lays flat against the lid for easy stacking.

Other varieties can be from all sorts of other calibers and configured for loading into other weapon systems, anything from 40mm linked grenades to 20mm cannon ammo bins. Each can be useful depending on what you need, but remember this! Ammo cans are heavy, and get much, much heavier when fully laden with ammo. Plan accordingly.

Grade 1: Excellent Condition to New/Unissued – Cans in this category show no signs of wear at all. Most importantly, the gasket will be intact and in nearly perfect condition. These cans will be marked with their original markings, but have not been re-marked or spray painted.

Grade 2: Good to Very Good Condition – These cans will show some character: scuffs, rubs, scratches and other minor blemishes, even small rust spots or water marks not exceeding ½” diameter. The interior will be rust free. A little spray paint is permissible in this grade.

Grade 3: Fair to Serviceable Condition – These cans have been used hard and put up wet. Heavy wear, fading, and rust may be present, both on the outside and inside along seams. Cans in this category may be bent or dinged in such a way that they will not seal without manual straightening. Spray paint will usually be present.

All of the cans can work for our purposes, but if you are willing to pay a little more you can assured of having better success by sticking with Grade 2 and the elusive Grade 1 cans. Grade 3 cans as advertised will sometimes be a nice surprise, only having a little rust on the outside and decent seals, but other times will need major TLC or in fact will be ready for the scrap heap.

In person, determining which cans are which is easy. It is ordering over the phone or internet that things can get dicey, especially when working with a new or unknown seller.

Where to Find Ammo Cans

The following venues are all potential sources of ammo cans. Some you might have thought to try, others maybe not, but all are viable sources to get your favorite stash cans that I myself have used in the past.

Your local gun shop should be your first stop. They might sell surplus cans, or they may not, but most shops will at one point get in bulk ammo that will arrive to them in ammo cans. They may sell it as is, can included, or parse it out at smaller quantities. The point is they may have cans stashed off the sales floor, so be sure to ask. Occasionally you can find cans beyond the standard

Despite their love for new, pristine and shiny products, big box retailers love money even more, and many will sell from time to time surplus USGI ammo cans. These will often go fast due to their great traffic, so keep an eye on ads or call regularly to get a jump on them when the jumping is good. Do take care, as some will stock new-production knockoff metal cans that are not USGI. These are almost always terribly overpriced.

Flea markets are a roll of the dice, as it depends on who is there and selling what, though you should definitely hit up larger flea markets that feature the same weekly or monthly vendors selling military surplus equipment. Ammo cans are easy to spot among the tables of junk, knickknacks and tchotchkes, so you can spin through hunting for them quickly. Just a reminder, make sure you inspect the can for squareness, dents, and a good seal. Don’t overpay.

Mil-surp emporiums used to sell ammo cans as their basic bread-and-butter commodity. Most places had mountains of them. With these stores going the way of the dodo thanks to the internet and shrinking pools of desirable American military surplus, many have either closed or blended their business model to other sectors like paintball and airsoft. Ammo cans are still commonly found here, but no longer are they the sure-thing stop they once were.

Your best source for good ammo cans may be your fellow preppers and shooters on the interwebs. Head over to your favorite forum that has good traffic and activity and peruse the for-sale and swap meet boards. You’ll likely find several people selling ammo cans. If not, you can always place a looking to buy ad and see who proffers any.

If there is a machine gun shoot of any size in your neck of the woods, be sure to check it out. Aside from being a fun and interesting way to watch money literally disappear into thin air, you can absolutely depend on participants and any merchants that may be set up having ammo cans. Chances are you can strike up a conversation and come away with some quality cans for cheap.

Ammo cans are a fairly common fixture at garage and yard sales in areas where hunting and other sport shooting is common, and around military installations. Try to be an early bird, because cans at these sales usually go cheap and quick, so you’ll need to be on them fast if you want to snag them.

Pawn shops are another source for ammo cans, but an intermittent one. Shops that do a brisk business in guns are more likely to have them than ones without, but you never know what you’ll find in these places. Shops located on the outskirts of military bases are definitely good bets.

Beat the bushes and bug your friends for some good cans. Your shooter buddies and gun-centric preppers will definitely have far more than they can use, and likely an irrational attachment to them. But for asking nicely or a good, old honest to goodness bribe they can be convinced to part with their precious, precious cans. Use your network and you’ll be able to come up with some cans in no time.

Like everything else imaginable, a few keystrokes and a click and you will have half a bazillion results for every kind of ammo can on earth, with each seller promising you A #1 quality, the cheapest price and satisfaction guaranteed.

Take care: it is easy to get fleeced paying top dollar for cans and get an inferior grade. Try to buy only from known, trusted merchants, or sellers with plenty of feedback for their cans. As supplies dry up and new lots are bought, they may go right on selling their Grade 3 cans under the old Grade 1 listing…

Ammo cans are a useful commodity for storing ammunition of all kinds, but also valuable for other kinds of safe, weatherproof storage. If you need a strongbox for your valuable items and gear, take the time to track down genuine military surplus ammo cans. They will last forever, and are definitely worth the time and expense.