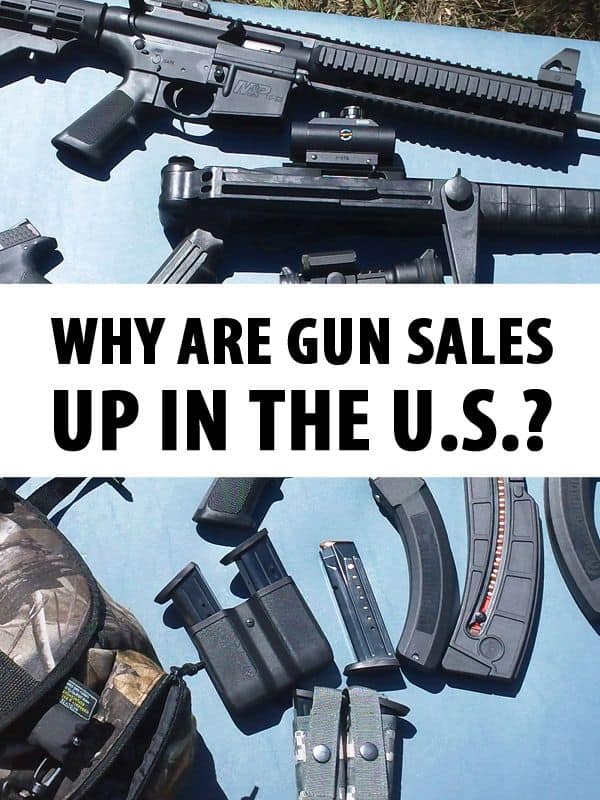 Ask any gun shop owner what they like least about the business of selling shooting irons, boomsticks and related gear and they’ll probably give you an answer with something to do about the feast or famine nature of it. The gun market goes through phases like any other, with periods of steady, even frenzied purchasing being punctuated by precipitous drops in consumption.

As of the writing of this article, the U.S. is seeing solid sales of guns, ammo, optics and everything else. Background checks on firearms (only a partial indicator of purchasing activity) are up around 5% from the same time period in 2017. Why is that? The factors are varied, but not as complex as you might think. Whether you care or not how the gun biz is going so long as they have your favorite caliber in stock at your local store, it will benefit you to learn how to “read the tea leaves” and anticipate these market swings.

You’ll be buying your favorite ammo in either a Buyer’s or Seller’s market, and timing your big purchases accordingly can save you a bunch of cash, and keep you from getting caught up in the rat race that always seems to happen anytime there is a rush.

I’ll give you an insider’s look at the current market, and a few tips and signs to watch out for in the future so you can tell where the market is heading.

Gun purchases in the U.S. are motivated overwhelmingly by fear. I don’t necessarily mean fear of criminals or the dark, I mean fear of legislation from Capitol Hill! Guns have been and will be red-hot political topic for the 20th century. Democrats and Republicans fight over them. People defend or demonize them. Legislators and political hopefuls stake their careers on pandering to one group or the other. None of this activity shoes any signs of stopping.

You’ll notice that gun sales skyrocket in the run-up to and subsequently after presidential elections, especially in close races or ones where a Democrat is favored to win. The fear that a shift in political power could allow onerous and far-reaching Federal gun control legislation to be enacted will see buyers getting off their duffs and into gun shops so they don’t miss out on the chance to own a certain make or type of gun, or components like magazines.

Perhaps ironically, it is Democrat politicians and anti-gun activist groups that are the gun seller’s best friends: their vehement and increasingly unhinged rhetoric rightly frightens pro-2nd Amendment gun owners and would-be gun buyers that, if they have their way, another useless but draconian Assault Weapons Ban or worse could become the law of the land.

This threat to liberty is what sends people into gun shops in droves, and leads to mass purchases on everything from ammo and magazines to spare parts. Anyone who was in or around a gun shop in the years leading up to the 2008 presidential election knows that fear alone of what Presidential Candidate Barack Obama and his Democrat White House would do to hobble private gun purchasing and ownership led to one of the longest lasting buying stampedes (and years long shortages) on guns and ammo in decades.

Perhaps surprisingly, President Obama did not try too hard to help his Democrat allies in Congress push through too much legislation, and did not implement any executive gun control initiatives. The facts did not matter much until the very end of his presidency, as, surely as the tide, any time he or Liberal members of congress even mentioned gun control, it would set off another “aftershock” of panic buying.

Conversely to all of that, it is Republican presidents and strong Conservative control of congress that will lead to slow, even stagnant buying of guns. With their being little fear of having the “door” on purchase or ownership of certain guns and parts slammed shut, most gun owners and many new or prospective gun buyers will put off a purchase considering there is no risk of missing out. Guns are expensive and plenty of people have other things on their plate that take priority without fear, that most reliable of motivators, giving them the push to walk into the gun shop, credit card in hand.

Another factor, macabre though it may be, is the frequency and severity of mass shootings. Mass shootings are politically polarizing, and highly motivating to activists on both sides of the issue. If there is any event that will see long-time trusty defenders of the 2nd Amendment bow or break in the face of political expediency, it is a mass shooting.

In the wake of such events, there are invariably cries for more gun control and commensurate saber-rattling from the political Left. Like any other time, this threatening talk will see a spike in gun sales until the time such talk dwindles down or is met with vehement resistance from the Right. 2017 and much of 2018 have seen a rash of several terrible mass shootings, among them the Las Vegas Mandalay Bay attack, and Parkland, FL High School Shooting.

These shootings and the political aftermath being media hot topics and constant subjects of argument has created an undercurrent of uncertainty in the gun-buying public counterweighted by more or less reliable Conservative control of Congress, impending Conservative edge in the U.S. Supreme Court and of course the mercurial but otherwise safe Trump-led White House. Nonetheless, the continual promises of “common-sense” (read: ludicrous) gun control initiatives by powerful Liberal politicians and political partisans has contributed largely to the increased tempo of gun sales. 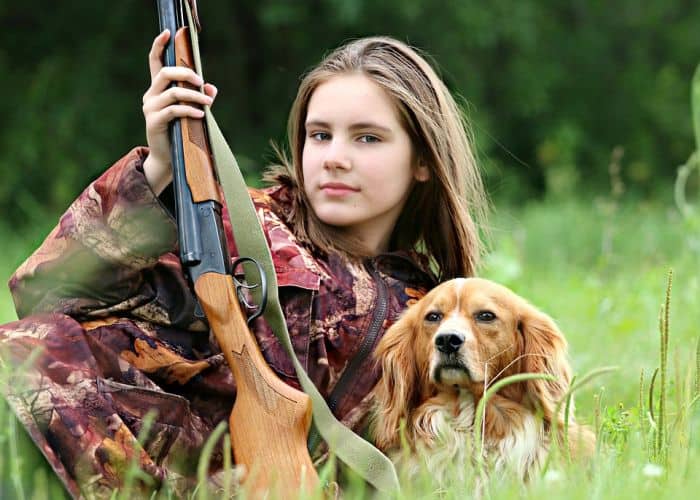 Hunting seasons will always see an increase in gun sales, as new hunters equip themselves for the first time afield in search of game big or small. Veteran hunters may decide to upgrade their hunting arm, or purchase a new one in pursuit of different quarry. Combined with all of the ongoing political agitation, the hunting season bump has contributed to the spike in sales we are seeing presently.

Another factor is the general “threat level” perceived by the populace. While it is tough to tabulate against any metric in this era of shock journalism and relentless peddling of fear and anger, times of increased strife and civil unrest will see concealed weapons permit applications increase and gun sales alongside them. Major or repeated acts of terrorism or threats of terrorism will also drive up sales according to the impact on daily life.

As always, the overall health of the economy contributes significantly to discretionary spending. For all but a few purchasers, a firearm is not really a must-have item. For those who have serious reason to fear for their safety thanks to a potential human predator, a gun will be at the top or very near on their Big Ticket list. Others who are not facing a specific threat but feel very strongly about self-defense will also be purchasing guns for their purposes so long as funds allow. Gun enthusiasts with extra funds will be buying guns left and right in a good economy, stuffing their safes with new additions to their collections.

The Christmas and Yuletide season always results in a predictable jump in gun sales, as this is one traditional time to give the gift of a firearm to a friend or loved one. A firearm is the gift that keeps on giving!

When the market has slowed down and sales of guns are dwindling (a Buyer’s market) you are in deal-getting prime time. Ammo should be plentiful, guns and all their parts available, and lead times on orders minimal or non-existent. Competition among dealers will be fierce if they want to survive.

Now is the time to strike! You should expect a good discount on any new firearm, and perhaps a few goodies tossed in to sweeten the deal. Paying above market rate for common ammo is dumb. Don’t do it in this market phase. That being said, buy as much as you can stand when you can; the saying you’ll hear from seasoned gun enthusiasts who have weathered hoarding and panic-buying before is “buy it cheap and stack it deep.” Good advice for any prepper. Now’s the time to pad your stash and ensure you have the hardware (guns and parts) and ammo to fuel your training and your sustainment supplies.

When the market is simmering, perhaps the run-up to election season or a looming anti-gun omnibus, take care: deals can still be had for the diligent, but they will be fewer and farther between. Certain regions will already be seeing price fixing due to dwindling supplies. Magazines will start vanishing. Now is the time to get what you have to have, and you should thank your lucky starts if you get anything under MSRP. Don’t balk at paying factory pricing if you need something and can afford it.

When the gun market is H-O-T hot, hot, hot, (Seller’s market) you will be facing chronic shortages or no availability of ammo, even the most common calibers. You will forget what a “high-cap” magazine looks like. The most popular guns will be on indefinite backorder when they aren’t marked up drastically on shelves. If you have waited till now to get what you need, you have screwed up. You’ll be paying hiked prices on everything, if you can get it, for the foreseeable future; panic buying is usually self-sustaining until such time as political theatre over gun control passes.

The moral of the story: do not wait to get what you need! If you are disciplined and purchase only what you need, when you can, you won’t be left regretting all the funds you squandered on a zombie themed crap and guns that are nifty novelties but of questionable utility. If you are serious about self sufficiency don’t be a hobbyist when it comes to buying until you have all your boxes ticked on your list.

Be sure to buy more ammo and mags than you think you need. You’ll consume some ammo for training and skill maintenance practice. Even the best magazines are disposable items; expect to lose a few through wear and tear. Also you may have a friend in need that could stand a hookup because he was not as smart and shrewd as you were on buying smart. Having some extra ammo and feeding sources to help bolster an ally in times of trouble is smart planning.

The U.S. is experiencing a spike in gun sales die to entirely normal and repeatable, if not consistent factors affecting the market. Ongoing rumblings and uncertainty about the increasingly partisan and hostile political environment is sustaining the increased buying trend. Presently supply is able to keep pace with demand and it is a good time to buy whatever you need. Rest assured that will change in the future. Empty shelves and usurious prices are just one campaign away. Don’t wait until that happens.