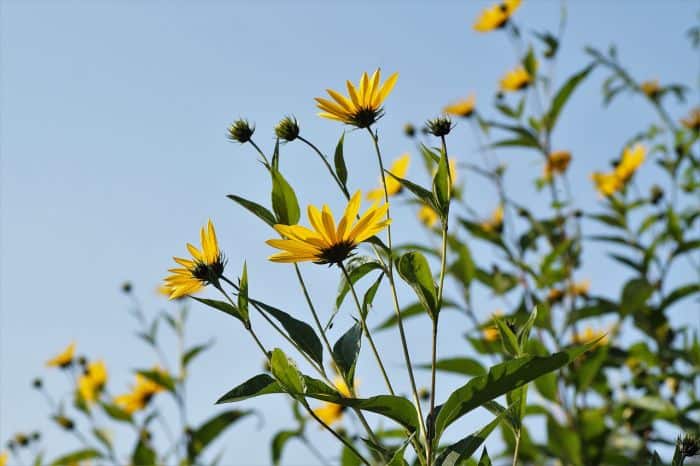 Many preppers do not know that the prettiest crop they can grow in their garden is also capable of producing up to 200 pounds of food. Jerusalem artichokes are not your mainstream or traditional farm crop, but they should be in every survival garden.

The tuber crop produced by Jerusalem artichoke plants are nutrient rich and highly versatile in nature from a food preparation perspective.

Tubers, like those grown by Jerusalem artichokes, are an underground produce comprised of the swollen plant stem. Potatoes are one popular and common example of tubers.

The tubers produced by Jerusalem artichokes range in shade from white to purple, to orange, to red, and brown. The interior tuber flesh is nearly always white.

Sunchoke tubers look a lot like ginger, but are decidedly more knobby in both texture and shape. Jerusalem artichoke tubers are generally smaller than potatoes but larger than ginger.

Some sunchoke fans feel the tubers have about the same consistency as water chestnuts. The average Jerusalem artichoke tuber is about two to four inches in size with an extremely thick skin – but size, texture, and skin type do vary by plant variety

Sunroot tubers are crisp and have a flavor that is a mixture of both sweetness and a nut-like taste.

Native Americans called Jerusalem artichokes sunroots. They cultivated the tubers alongside corn and beans because they were such a good companion crop for these dietary staples.

Many Native American tribes also planted the sunroots along their seasonal migration trails to ensure their members would also have a reliable and nutrient rich food source – even during the cold winter months.

Jerusalem artichokes do not hail from the Holy City… although no one can say with 100% certainty how sunchokes became known for a location and vegetable variety it does not have any relation to.

The most widely accepted theory about the moniker of this plant is that it’s Latin name was simply mispronounced when its cultivation spread amongst common folks during the 1600s.

A Roman Catholic cardinal who was cultivating the plant decided to call it “Girasole Articocco.” Girasole is the Latin word for sunflower.

The cardinal presented some of the plants to the Pope as a gift. The Catholic leader so enjoyed the look and taste of the sunchokes that he too shared them with other members of the church.

As the years went by, the popularity of the tubers grew substantially in Rome, but failed to capture the attention of the rest of Europe for another hundred years. Two centuries later, chefs at upscale French restaurants brought the Jerusalem artichokes to the forefront of fine dining by using them in several popular dishes.

Chef Louis Eustache Ude was one of the most prominent chefs to use the tubers. Ude made a version of the popular Palestone soup with the sunchokes as a primary base ingredient.

Cultivation of the Jerusalem artichokes remained steady, but did not cross over into mainstream gardening in Europe until World War II.

When the lack of food availability in that part of Europe due to the raging war caused many families and soldiers to go hungry, this mega producing plant once again saw a resurgence, and began appearing in gardens everywhere in the region.

While Jerusalem artichokes may or may not be deemed potentially invasive in your state, they do spread quite quickly and easily. Because our survival retreat encompasses 56 acres, the quick spreading attributes of the plant suit me fine – ample space and more food.

If you prefer not to allow the Jerusalem artichokes to take over up to five feet of space (usually) around the hole where they are planted, simply prune them to prevent the honeysuckle bush style bulk and development.

Sunchokes can be grown in 5-gallon or larger containers if space restraints are a concern. But, even though they will grow and thrive, the plant should not be expected to produce 200 pounds of crops.

These perennial plants may be the easiest variety of vegetable to cultivate that you have ever grown. They are absolutely a very low to even “no” maintenance plant.

Jerusalem artichokes are incredibly both pest and plant disease resistant. They have even been known to defy the killing power of Japanese beetles. The only plant diseases that may typically have an impact on sunroot plants are mildew and rot.

Because Jerusalem artichoke plants are equally hardy against both drought and even light flooding, it would usually take a substantial amount of water exposure and dampness for a plant to succumb to mildew, rot, or even molding.

Even if these unfortunate situations do occur, that does not mean the plant will actually die. Sometimes (more often than not in my personal experience) A sunchoke plant with these types of plant diseases will merely produce a reduced yield.

Jerusalem artichokes can grow heartily in nearly any type of soil, but a loose well-draining style of dirt is highly recommended.

When placed in a full sun area you can basically “plant it and forget it” when it comes to the tending needs of these magnificent tuber plants.

How To Grow Jerusalem Artichokes

Jerusalem artichokes are recommended for USDA Agriculture Growing Zones 3 through 9. In these growing areas, planting should occur from mid-March through Mid-April.

In the recommended growing zone, adjust your planting times to better ensure the final threat of a hard frost has passed before putting sunchokes in the ground.

If planting in a colder growing zone, start the tubers inside and then relocate them outside later in April or mulch the above ground area over the hole to help insulate the sprouting plant from the chill of the cold and inclement weather.

For best results, till the ground or turn the soil in raised beds, before planting the sunchoke tubers. This will expose more soft and nutrient rich soil, especially in ground that is still hard and slightly chilled from a long winter.

When growing Jerusalem artichokes in a container, make sure it is at least a 5-gallon pot or bucket. While these hardy plants are not known for transplanting well, they can be started in containers and then removed for soil planting, if your growing area requires doing so.

In such cases, do not expect a yield of 200 pounds, but a total produce weight more in the 50 to 75 pound range.

A tuber that is planted must have an “eye” just like a potato. Simply cut out a chunk of each tuber and place it in the soil with the eye facing up towards the surface.

The hole the tubers are planted in should be between four to six inches deep. If planting in a row like a traditional garden crop, place each tuber about 12 inches apart.

Do not plant the Jerusalem artichokes alongside any plant that also needs full sun. The sunchokes will block the sun’s rays, and cast shade on the other crops growing in adjacent rows.

Plant the sunchokes in a full sun area. It is not uncommon for these perennial plants to stretch to five feet wide at the base if allowed to grow undisturbed.

It typically takes 90 days for Jerusalem artichoke plants to reach maturity. If the early spring weather is unseasonably cold, mulching around the young and growing plants is the best way to ensure the chances of a robust yield developing.

If harvesting the tubers for their inulin properties to help naturally regulate blood sugar, it is best to do so in the spring when this compound is at the peak of its production. These tubers have often been dubbed the “diabetic’s potato” because they contain no other carbohydrates.

Jerusalem artichokes can be harvested in the spring when the inulin properties are at their peak, or at the end of summer after they have finished flowering and their stalks begin to fall over.

Some growers steadfastly maintain that allowing the tubers to remain in the ground until one or even two light frosts have occured, the taste of the Jerusalem artichokes becomes even more sweet.

The tubers have a short shelf life after being harvested. They can keep in the refrigerator.

If you plan on leaving the tubers in the ground for up to 12 months, add a layer of mulch that is 12 inches thick over the hold where they are growing to prevent them from completely freezing.

If the tubers are frozen solid, they should be discarded into the compost pile and not consumed.

Dig up the tubers manually, or with a tractor implement designed to harvest potatoes on an as needed basis so you have a continually fresh supply. Do not wash the tubes until you are ready to use them to help increase their longevity.

If kept in a cellar or cellar like environment (an unheated garage or shed) the Jerusalem artichokes should keep for a minimum of three months. For best longevity results, store the harvested tubers in an environment that has a steady 32 to 40 degree F (0 to 4 Celsius) temperature, and 90% humidity.

How to Eat Jerusalem Artichokes

Why You Should Cultivate this Crop

It would be difficult to nearly impossible to find a crop that not only is capable of producing such an enormous yield but also do so even when planted in mediocre soil and when subjected to drought, high winds, and even light flooding.

Preppers need to grow a crop that is as hardy as they are – and Jerusalem artichokes fit that bill perfectly. If you planted sunchokes along your survival route they could become a living cache of food that is just beyond your fingertips during a time of need.

Very few folks are likely to even notice you are growing ample food if they spot Jerusalem artichoke plants as part of your landscaping or along a fenceline. They will simply look like ornamental plants or pretty weeds, and not a prime survival food source.

8 thoughts on “Jerusalem Artichoke – How to Grow Tons of It”