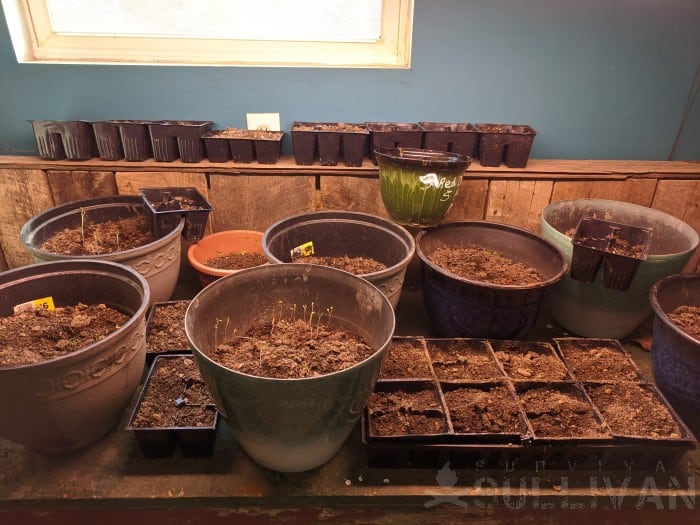 Starting seeds indoors is a crucial part of any prepper’s food security plan. Growing your own groceries is the best way you can ensure that your family does not starve during the apocalypse.

The only thing worse than not starting seeds to bolster your food supply would be to spend a lot of time and money only to do it all wrong and have a small or no harvest after many hours of hard work.

Seeds starting can be accomplished indoors no matter where you live. Sure, if you’re a country prepper (like I am) with ample space for a greenhouse you can start copious amounts of seeds and grow food year-round.

Relying on a local commercial greenhouse to fill your garden with plants is a sure way to go hungry during a SHTF event.

There is only one way to ensure that you will have a growing season to supplement the long-term shelf stable food buckets you have stockpiled, as well as the livestock, fish, and wild game that you can harvest, and that is to start your own quality seeds indoors the right way.

Preppers should always have enough seeds preserved or purchased to get a new growing season started, without relying on running out to a store to buy more, purchase plants, or any of the other items necessary for germinating seeds inside.

Not only should you be starting vegetable seeds for a traditional garden plot, you should also be growing fruit seeds and dwarf trees as part of the indoor grocery growing endeavor.

The growing zone you live in as well as the indoor space available will dictate how many seed trays you can start as well as how many dwarf trees can be grown. Due to their portable nature such trees can be relocated outdoors during warm weather months.

✅ Reason #1. Seed starting will allow you to KNOW you have food to help you family during a disaster.

✅ Reason #2. Starting seeds indoors allows you to increase your growing season just long enough such that non-native varieties and plants from outside of your growing zone could be cultivated.

If you live in an area with a short growing season, like Alaska and states along the United States and Canadian border, starting seeds indoors can allow you to grow more traditional garden crops that are otherwise unsuited for your natural environment.

✅ Reason #3. Cold hardy crops can be started as seeds indoors to give them an extra growing boost before they are hardened off, and relocated outside.

Crops like lettuce, radishes, carrots, Jerusalem artichokes, kale, snow peas, and broccoli can be ready to harvest by the time you are starting the typical garden season.

✅ Reason #4. Seed starting also helps preppers cultivate portable crops. Even if your survival plan is to bug in on a retreat like mine is, having a backup bugout plan in case leaving is the only way to keep your family alive is incredibly wise.

When garden plants begin as tiny seeds inside your home, they too can be loaded with the rest of the stockpiled preps and taken on the road, creating a portable food source.

✅ Reason #5. The money saved by starting your own plants from seed instead of buying them from a gardening store can be put to far better use stockpiling more preps.

When to Start Seeds Indoors

Some seeds are traditionally sown directly into the soil (unless you have a short growing season), but this doesn’t mean you can’t start these types of plants inside (green beans for example) so you can bolster the yield.

Following the sowing directions can help prevent some of the most common seed germination pitfalls. If your sprouting seeds become too spindly and tall, or root bound while being cultivated indoors, the plants typically have a reduced yield, or they can die out entirely.

Damping (or dampening) off can also happen if the they’re being grown in too cold or too humid environments. It’s extremely rare for a sprouted seed to be able to recover from damping off disease.

Starting not just seeds but tuber and bulb crops like potatoes, Jerusalem artichokes, and onions, can all be done inside the home, a greenhouse, or in a cold frame outdoors.

All vegetable, fruit, herb, and medicinal flower seeds come with starting and growing tips right on the packet.

If you are a first-time gardener (or one who has struggled germinating seeds in the past) who was given preserved seeds to start from a friend or loved one, the seed starting guide below will help ensure your success.

Annual varieties of seeds are typically planted indoors about six weeks before the threat of a last hard frost is anticipated.

Soil quality and density play a significant role in the germination process. Far too often, novice gardeners use the same type of dirt for every seed they plant regardless of what soil type is recommended.

A seed starter mix is usually best because it is fine enough for the small seeds to penetrate, and prompts the growth of robust roots.

Using your own carefully crafted compost is often fine, but adding vermiculite and/or peat moss into the dirt will help separate the texture enough for seeds to germinate properly.

How to Start Pepper Seeds (All Varieties)

How to Start Onions Seeds

How to Start Brussels Sprouts Seeds

How to Start Cucumbers Seeds

How to Start Summer Squash Seeds

How to Start Eggplant Seeds

How to Start Cauliflower Seeds

How to Start Peas Seeds

How to Start Cabbage Seeds

How to Start Broccoli Seeds

How to Start Swiss Chard Seeds

How to Start Rice Seeds

How to Start Strawberries Seeds

How to Start Tomatoes Seeds

The germination of herb seeds varies greatly. Some herbs, both medicinal and edible, have incredibly long growing seasons and must be started indoors in many climates. Thankfully, most common varieties of herbs can be grown in small containers indoors year round.

During my first few years of gardening, I either over-watered or vastly under-watered my seeds and lost nearly half of them. I have found that using a squirt bottle instead of even a small watering can is helpful in keeping the soil moist, and not causing any damage to the developing sprouts.

The power of the water stream pouring out of the watering can is capable of damaging or dislodging the root system on the sprout, causing stunted growth or death. Always water the soil and not the growing little plant. A turkey baster can also work quite well for watering seeds and young plants.

Always water the plants in the morning so their soil has time to dry before the lights are turned off or turned down at night. This same process should be followed when hardening off the plants. Watering plants outdoors during the heat of the day often scorches them – causing a reduced yield, or death.

If the growing instructions recommend thinning seeds as they grow, wait until the plants have at least a second set of leaves unless otherwise directed by the growing packet.

After thinning out the plants, always water them and keep them in a warm and sunny spot to help the young plants acclimate to their new surroundings with as little trauma as possible.

I find it best to do plant thinning during the morning to give the plants and the soil plenty of time, dry before evening when the room is cooler or grow lights are turned off for the day.

If you have a window with good sunlight for the bulk of the day that may be enough exposure and heat to germinate some seeds, but the odds are not in your favor in most regions of the country.

During the late winter months the chill coming off of the windows, even if they garner powerful southern exposure, if often not enough to keep the soil warm and germinate seeds properly.

Using grow lights and in some cases a heated seed mat (or heating pad) as well, are needed to ensure the best possible germination conditions. Grow lights range in price from $15 for small clip on style ones that are powerful enough to grow a single tray or seeds – or three stackable planters.

Follow the lighting strength and time on the seed packet by the letter to avoid seed and sprout killing fluctuations in both “sunlight” and heat. If the growing seedlings are leaning to one side or another, it is not receiving the light evenly and will need the tray or planter rotated to avoid deformed growth or dampening off disease.

Always label each seed tray of container with the contents. Even though you may feel certain that that identification later will be simple and the seed trays will never be moved out of order, do not change improper growing methods of mistaken identification.

While the hardening off recommended time can vary widely by plant variety, ALL plants must be hardened off before being relocated outside.

Taking a plant, regardless if it is young or near maturity, out of a well-heated and well-regulated environment into the spring air that WILL fluctuate greatly not just from day to night but from day to day OFTEN kills the plant.

If your seed packet or growing zone specific gardening guide does not offer specific steps to follow, here are some general ones that tend to work well for almost everything that can live in USDA Growing Zone 6.

The Most Common Seed Starting Mistakes

When starting seeds indoors, even if you are an accomplished gardener who has great luck with freshly purchased plants every year, expect to lose at least 10% of the seeds. Seeds are fickle, and sometimes are just not going to grow no matter how well you tend to them.

Remain mindful of the growing space available to you when cultivating seeds – it can be easy to get carried away if you have the indoor or greenhouse space to do so.

If you discover you successfully sprouted too many seeds for your traditional ground plot garden or raised beds, consider using hanging planters, portable containers, and vertical gardening to grow more groceries in every inch of nice sunny space your property offers.